I did not expect to see the name of a man who’s work I grew up watching appear in the credits of my favorite show this season. A lot of ink has been spilled concerning Kazunori Mizuno’s passing since it happened in March earlier this year, and there’s little I can say that hasn’t already been said about the man’s legacy, but his death is a personal one to me. It’s no secret that I am a huge fan of Yu Yu Hakusho. If given the opportunity, I would rant and rave about the series all day. Why? Because it was a show that defined my experience as a budding anime fan and still amazes me today. And looking back on the work Mizuno contributed to the series, I realize that many of those amazing moments etched into my childhood memories were guided by his hand. Now I’m an adult, still amazed by animation, still wowed by moments that I will remember for years to come, and I want to share that with anyone who will listen – anyone who will watch. I wonder if that same passion was what he clung onto up until his final rest. Thank you, my friend I never knew.

This has made me realize, you can get to know an artist through their art. And thematically, that’s what this episode is about: feeling inspired by the craft of another because it has been so keenly and finely honed. Tatara is inspired by the amazing dancing of Kiyoharu in the standout scene of the show.

Lighting plays a huge role in this scene. An ethereal aura surrounding Kiyoharu highlights him against the background. Portions of his body freely elongate to accentuate his movements. It’s animation of the highest caliber depicting elegance. Gossamer outlines aid in the effect, exuding a near angelic quality of finesse that is absolutely captivating. It’s a style very reminiscent of the brush like scenes used in Haikyuu!! for powerful spikes, but less robust and more sleek in nature.

It’s no wonder then, as was mentioned last time, the same team that animated Haikyuu!! is working on Welcome to the Ballroom, this includes the talented BoYa Liang (who we interviewed back in December while she was working on Haikyuu!! season 3) in the promoted role as one of the overseers of the dance animation.  Her comments online credited the amazing scene above to the series director Yoshimi Itazu. The translation of her comments are as follows:

“The director revised all the key animation with help from Mukouda in the scene when Kiyoharu Hyoudou was dancing at home, until it became what it is now. There were two other scenes which look very unique (I’m not sure which they are XD), that were drawn by Mukouda on his own, because the director thought the previous incarnation wouldn’t be impressive enough.”

According to Liang, the dance scenes this episode had to be reanimated by Mukouda after issues with outsourcing the animation to studio Pierrot (the studio the deceased Mizuno worked at). Not only this, but Mukouda took over for Mizuno after his death as a co-episode director.

This scene is especially haunting when you consider the theme of this episode. A younger, but bright-eyed and optimistic youth is wowed by the more experienced and impassioned senior, awed at his skill and dedication. What’s more is that previously in the episode it is revealed that Kiyoharu had taken first place in a competition with a fever of 39°C (roughly 102°F). There is a very primal drive that good sports shows imbue their viewer with. Welcome to the Ballroom is no different.

Excellent blocking continues to be a mainstay in episode 2. Each character’s personality is expressed through the way they are placed in the shot. Kaname Sengoku, the biggest personality in the room (as Latin dance champion and head instructor), sits closer to the camera and is thus bigger than the remaining characters in the room. In the simplest cinematic language, size equals importance. Thus the side characters are placed further back, shrinking them and their importance to the scene. This feels more like a film technique than something you’d find in anime. The only thing holding it back is the lack of lifelike movement which would be too much for a limited televised production to emulate. (Though, similar things have happened on Haikyuu!!.)

Successful blocking establishes a mood that the viewer can instantly hone in on. Here Tatara is the main focus, but not the closest character to the camera. Instead, Kiyoharu completely surrounds him in the frame, but remains out of focus as not to shift our attention away from Tatara. The physical position of the characters is a visual queue to help us understand how overwhelmed our main character feels.

The introduction of Kiyoharu is a perfect example of establishing a character through visual storytelling.

His appearance is completely nonchalant, accented perfectly with a yawn so expansive it threatens to consume his face. For a brief moment, the character is completely expressed by his mouth’s movement. It’s wide and unruly with no signs of restraint, which is very indicative of Kiyoharu’s personality. It’s the principle of squash and stretch; ibcf has written about this at length and I highly suggest you read his post.

Episode 2 introduces several new characters. The most important one is Kiyoharu Hyōdō, who’s bored attitude is fairly amusing, if not especially compelling. There are also some physical gags and dressing room hi-jinks, mostly at Tatara’s expense. I still find Tatara kind of bland, though he is more tolerable than I first assumed he’d be. The story continues its standard shōnen course, with no interesting twists or surprises yet.

In lighter news, we get lots of cartoony poses and facial expressions. The realistic designs aren’t as stiff as I’d feared; the animators still manage to have fun with them. There’s some great moments like Shizuku and Sengoku nonchalantly eating chips, and Kiyoharu getting picked up by his shirt. These little details go a long way towards making the characters likable. 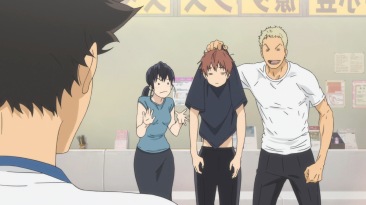 This episode had a troubled production, though you wouldn’t know just from seeing it. Two directors had to take over after Kazunori Mizuno’s tragic passing. The animation was subcontracted to Pierrot, but many scenes evidently had to be redone. Despite all this, the art and direction is quite good throughout. Takashi Mukouda took on the herculean task of re-animating almost every action cut himself, and his effort shows. The dances are consistently stylish and graceful. I especially like Mukouda’s establishing shots of the dance competition, where he’s free to draw the extras in his own quirky angular style.

There are two particularly remarkable shots towards the end. The character art transforms into a sketchy, fluid style that immediately brings to mind Shinya Ohira. In fact, Yoshimi Itazu—the series director himself—re-animated these cuts (with Mukouda adding his own corrections). I like how the animation suddenly switches back to normal, as if we’d caught a glimpse of magic. It’s a brief yet powerful moment that works perfectly in the context of the scene.

The second part of the live drawing we recorded is included below. Here the crowd begins to ask the panel questions about the production of the show. Remember, these videos and other specialties are included in advance at our Patreon! Enjoy the video!