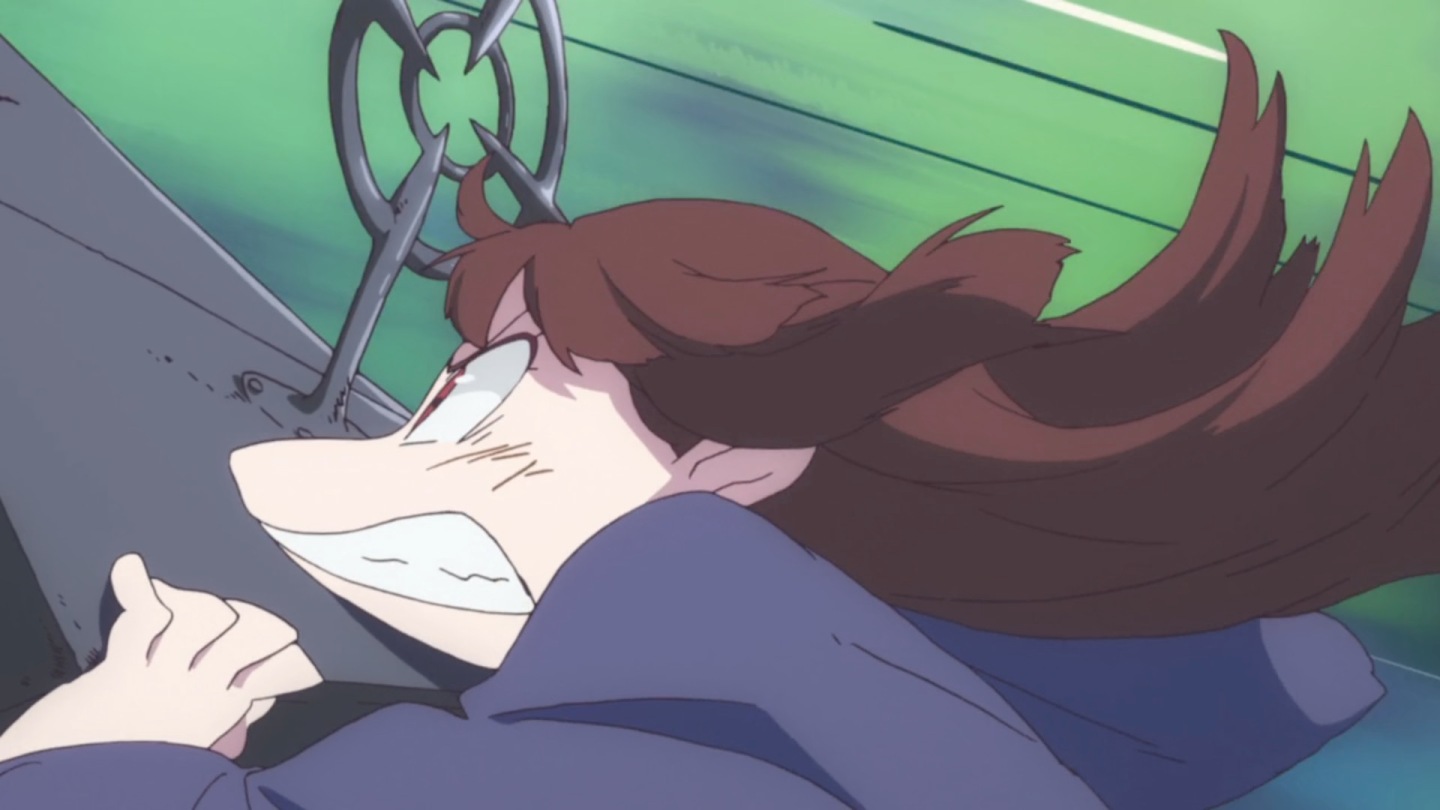 Animation jargon may seem bewildering at first. Ever see a piece of animation that you liked, but you couldn’t articulate what was good about it? Not to worry—Wave Motion Cannon has your back! This series of posts will cover the 12 principles of animation as described by legendary Disney animators Frank Thomas and Ollie Johnston in their book The Illusion of Life. The usage of the techniques has evolved over the decades and across different nations, but the general ideas have remained the same. Once you’ve learned to recognize these principles, you’ll be a sakuga expert in no time!

Squash and stretch is exactly what it sounds like. Take a rubber ball and push it down against the floor so that it compresses. That’s squash. Now pull the ball apart from opposite sides so that it lengthens: that’s stretch. It’s the same thing in animation—tension and compression represented by drawings. Squash and stretch makes a drawing feel elastic rather than rigid and inanimate. This is important because animation often deals with living characters. Real flesh-and-blood creatures are made up of pliable, organic material. Without squash and stretch, animated characters may look and move like lifeless mannequins.

On the other hand, if portraying inanimate objects is your goal, then rigid forms are appropriate. A rock, chair, or giant robot would look less convincing if it warped and deformed like silly putty. In the following scene from Mobile Police Patlabor (KA: Hiroyuki Okiura), the robots are animated to look brittle and metallic. When they strike each other they do not bend; they break.

Also, certain parts of a character or object may be more malleable than other parts. The skull, being made of immobile bone, is not as pliable as the jaw and cheek. Of course, the rules might vary depending on your cartoon’s fidelity to realism; i.e. Looney Tunes characters can squash and stretch more liberally than those in Grave of the Fireflies.

Squash and stretch can also convey how actions relate to each other. For instance: when you smile, your nose stretches apart, and your upper cheeks squash and make your eyes narrower. As per Newton’s laws, the movement of one part of the face causes an equal and opposite reaction of another. Below is a scene from Tokyo Godfathers (KA: Shinji Otsuka), one of the few anime films to utilize squash and stretch for acting.

You can also use squash and stretch to depict weight. When people walk or run, their muscles flex and their loose flesh reacts to the movement. It is important to note that no matter how much an object squashes and stretches, its volume never changes. Even if its shape undergoes extreme distortion, the animator must preserve the size and solidity of the form.

Squash and stretch in itself can convey personality. Frank & Ollie use the example of a half-filled flour sack drawn in various shapes and positions to suggest certain attitudes. An analogous piece of animation can be found in FLCL episode 3, which features an amorphous curry-filled monster (KA: Shinya Ohira).

Monkey D. Luffy, the pliable protagonist of One Piece, might seem to epitomize squash and stretch—but he actually shows complete disregard for it. His limbs extend to absurd lengths without changing volume. Luffy is defined more by the “rubber hose” style, which was mainly popular in the 1920’s before squash and stretch came into prominence. In rubber hose animation, objects morph in size without restriction and body parts distort independently of one another. It can be a fun technique, but it should not be confused with proper squash and stretch.

According to Frank and Ollie, squash and stretch is “by far the most important” principle of animation. However, this may reflect their bias as lifelong Disney animators. Character acting and “believability” were all-important in Disney animation, and they essentially invented squash and stretch for this purpose. Other Golden Age studios didn’t necessarily have the same priorities. The Warner Bros. animators generally followed Disney’s example, but their application of squash and stretch was more practical. They used it more prominently for humorous exaggeration than for realistic expression of physics. By the 50’s, squash and stretch was gradually toned down among the American studios. This was likely due in part to UPA’s influence, which eschewed naturalistic motion in favor of a stylized, graphic approach. With the advent of television in the late 50’s and 60’s, cartoons had to make do with tighter schedules and budgets, and there were few opportunities for the lavish full animation that Disney-style psychics required.

Early Japanese animation was heavily influenced by Disney, but didn’t often employ squash and stretch (Masao Kumakawa’s Baby Kangaroo’s Birthday Surprise is a notable rare exception). After the war, Disney-type acting all but disappeared from anime. Toei Doga—the most prominent anime studio of the 50’s—picked up on Disney’s solid drawing, appeal, and fluid animation, but left out squash and stretch in its character animation. As Mark Kausler observed about Kitty’s Graffiti (1957), “it’s all a bit wooden looking…the kitten’s doodled cars and trains have more squash and stretch to them than the characters!” Once television proliferated in Japan, it might have seemed there was little chance of the technique surviving in anime.

However—while American TV animation proceeded to throw out squash and stretch (along with all the other principles) in the 60’s and 70’s, anime continued to incorporate it, albeit in limited form. Instead of applying it to acting or realistic physics, the Japanese animators used it almost exclusively for cartoon exaggeration. The characters in Urusei Yatsura and Nichijou might squash and stretch, but only as part of a gag or symbolic expression. This is in line with anime’s overall more impressionistic style of motion, but in “realistic” scenes, distortion as a means of weight or expression almost never happens. The original Disney purpose of the technique has been largely forgotten (of course, there are some individual exceptions like Shigeru Yamamoto and Koji Nanke). One might argue that anime’s restrained approach to squash and stretch limits its visual range.

That said, there’s nothing inherently wrong with a looser interpretation of squash and stretch. Freewheeling deformation can be creative and fun!