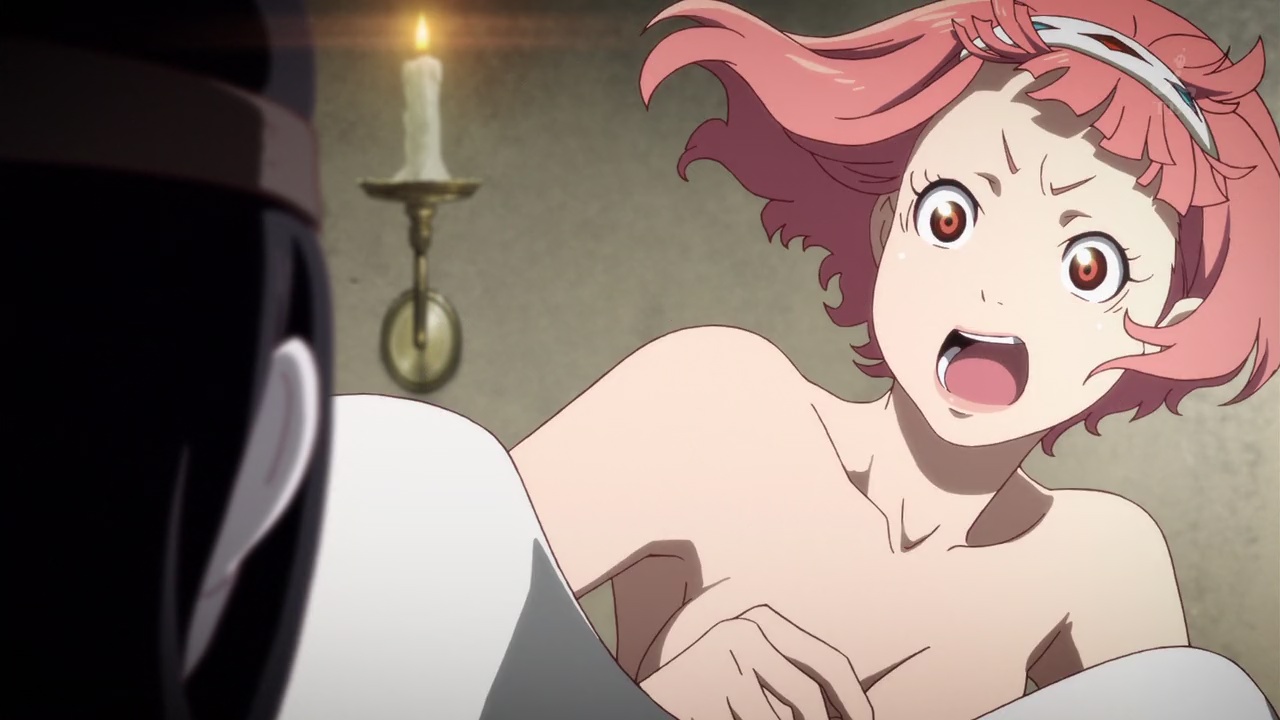 The long overdue followup to the previous post (check it out here), Sakuga & Cinema is back with a mixture of newer shows with an established classic flair. This week we’ll be covering some character acting in Bahamut: Virgin Soul, along with the value of storyboards from the finale of Evangelion, but before all of that, I was surprised by the cinematic storytelling in Sakura Quest and some of the cultural significance packed behind it. As always, please enjoy this installment of the ongoing series of posts and feel free to leave a comment suggesting specific clips or episodes you’d like me to look at!

Sakura Quest is a quiet show. There are no scenes of flashy battle animation, or cartoonish expressions, or even lavish frame rates. To be 100% honest, there’s little going on in Sakura Quest at all – but that’s kind of the point. What the show does perfectly is use its visuals to create a sense of being there, in a specific situation, in a specific moment. It’s predominately visual approach allows us to feel the story, rather than be told the story, which makes for a much more powerful experience. Take this cut for example:

Our protagonist, Yoshino, is walking down the street with her new employers, taking in the vista (or in this case, lack of). On every side, shops and stores are closed, but we aren’t told they’re closed, we are allowed to extrapolate and internalize the simple message as details of Yoshino’s new job are explained to her. But perhaps what is most telling is not the obvious imagery of economic downturn, it’s actually Yoshino’s reaction to it all. Up until this point in this episode, we see Yoshino trying to make it in Tokyo, resisting settling down in the countryside. Even though she is from the sticks, she does not identify with that lifestyle, never the less, she is familiar with it. So come 0:09 into the clip, what is her reaction? Nothing. It doesn’t faze her, she already knows this.

This simple scene embodies something that Japanese audience with immediate exposure to rural Japan would instantly recognize. The economic situation has gotten so bad that many rural Japanese towns simply cannot keep up. Entire towns have been reduced to little more than bars and train stations where agricultural efforts barely justify their financial existence. There’s a lot to unpack in the Japanese economic situation, but here the scene stays so incredibly simple without sacrificing the complexity of the emotion. And Yoshino’s reaction punctuates this, almost speaking the most desperate of Japanese phrases, 仕方が無い – shigata ga nai, literally ‘it cannot be helped’. 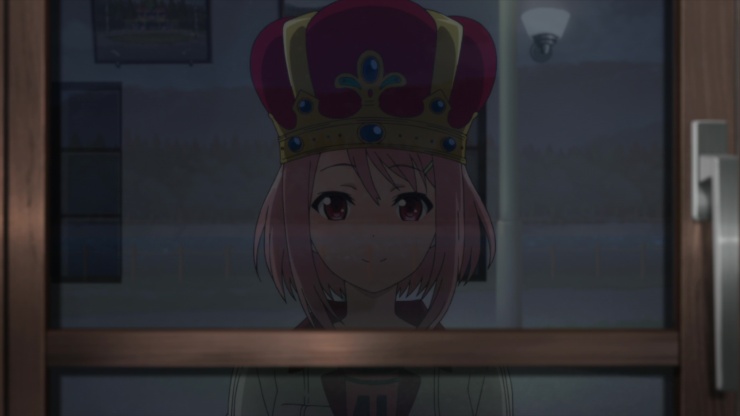 Reflections are some of the most important tools in cinema. There is a limited amount of space in a frame, and a reflection maximizes the use of that space by overlaying one focus on top of another. However, when these images are stacked, it allows the viewer to emotionally connect the two. So in this final scene of the episode, Yoshino symbolically embraces her role in revitalizing the town by placing the crown on her own head and looking over her new kingdom, the home she’s always belonged to.

For those of you who may not know, storyboards are the backbone of anime production. Often times (though not always), it is the episode director who will storyboard an episode, setting the frame work by which the episode episode will follow. Depending on the director, the storyboard can be incredibly detailed, dictating exactly how a scene or cut will look as a finished product. Such is the case for a director like Satoshi Kon who’s storyboards often looked like finished products themselves. Case in point below, from the last project he completed before he died, Ohaiyo. 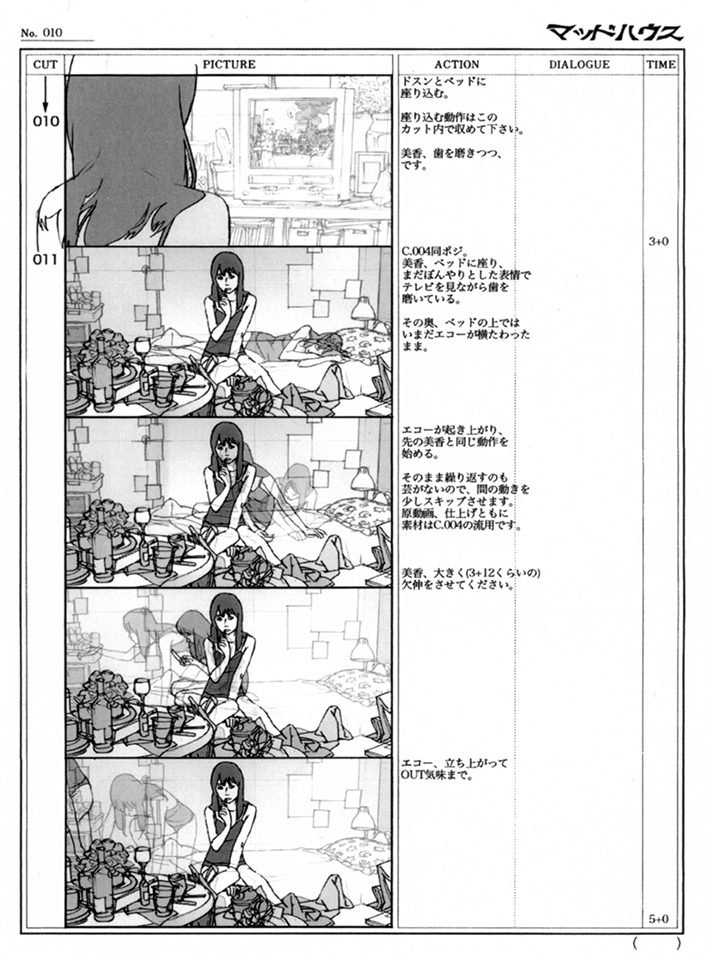 If you watch the short to 0:30, you’ll notice that everything looks exactly like it did in the storyboard, and I mean everything. The movement of the woman, the layout of the garbage in the foreground, etc. all of it is nearly a perfect match. However, if you’re paying attention you’ll also notice there is one major difference: the version of the woman brushing her teeth yawns, an addition over the storyboard. As to who was responsible for the addition, we may never know, and since it is a minor detail it may not even be one that anyone cares to know. But what if the change deviated drastically from the storyboard? And what if that deviation was an amazing display of visuals?

Such was the case on Evangelion episode 26, storyboarded by none other than Hideaki Anno himself. 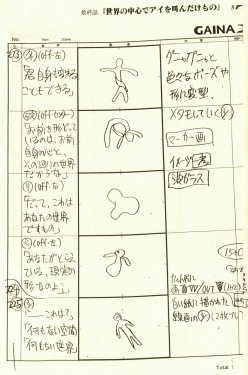 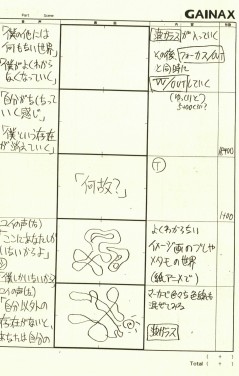 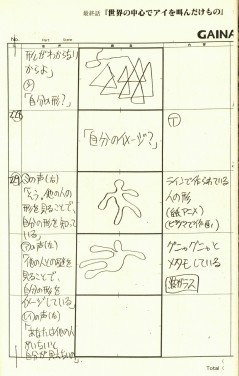 This iconic scene was handed to master animator, Yoh Yoshinari. In fact, you could argue that it was Yoh Yoshinari who made it iconic. Anno’s storyboard is extremely undefined, visually detailing that a figure (who we know to be Shinji Ikari) twist and bend before losing shape. But just what that shape becomes not even Anno knows. He begins to draw squiggley shapes that can only exist on paper before reconstituting as a series of triangles. It’s clear that Anno is struggling to find mind bending imagery that challenges perception, leaving freedom for Yoshinari to draw whatever his heart desired.

This is an excellent example of an animator’s raw talent. Unguided and unrestricted, the images created are of Yoshinari’s own accord, cycling through various shapes, exhibiting amazing control over squash and stretch principles. This changes to forms of prehistoric creatures, all maintaining a real sense of weight despite floating in midair. Yoshinari demonstrates masterful control over his line work, as a creature becomes a planet, then a pair of wings, only to shift to a blazing cross. More amazing is that Yoshinari shifts between effects with completely opposite properties and changes between them with ease, fire into liquid, liquid into a solid.

The emotion of this scene is mind-bending. Nothing is constant, life and form remain on the fringes of reality against a backdrop the does nothing to provide context; the viewer must make of the images what they will. That’ why this scene is so important, that’s why it is also full (or not) of so much emotion, because the viewer must infer meaning from seemingly unrelated images. The viewer must provide closure to the images on screen. It’s an extremely rewarding and edifying process, and Yoshinari let’s us arrive at a personal conclusion. His choice of images, an egg into prehistoric life, into recognizable symbols that give way to opposing elements, all of this was carefully crafted with Evangelion‘s message in mind. It’s a wonderful example of what Shinji’s lost state of existence means to Yoshinari, time passes, ideas fade, but the significance of self (trying o define who one believes they are) will always remain within. At the very least, Yoshinari’s interpretation of what director Anno’s message. 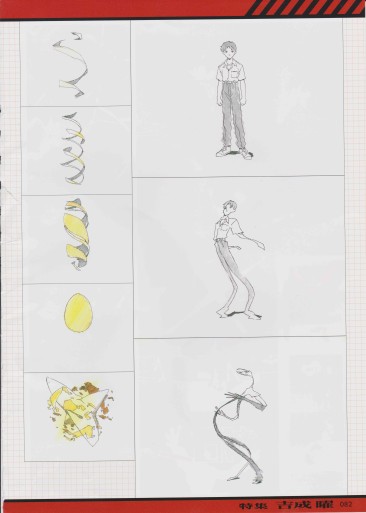 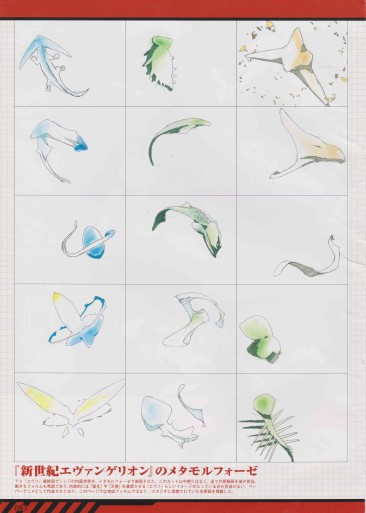 The follow up cut follows Anno’s directions to the T. 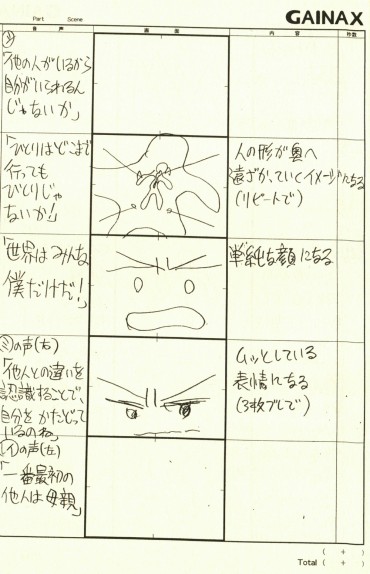 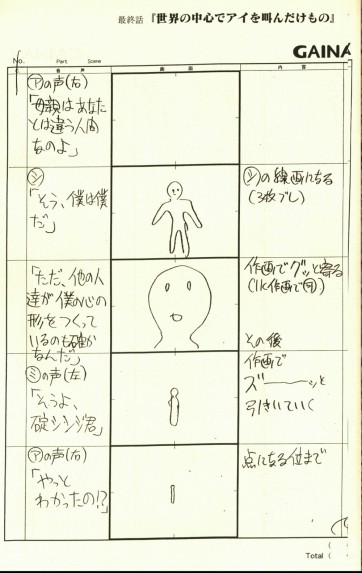 With the focus on the abstract completed, the focus is then shifted to the individual, Shinji Ikari. But that individual remains undefined, falling constantly into himself. The face, the most recognizable image of one’s self, has no boundary to hold it. There is where the choice of using rough pencil outlines shines the brightest. It provides the minimum amount of recognizable definition and again speaks well to the theme of the scene it portrays. It is debatable as to whether or not this was Yoh Yoshinari’s personal decision, (though I would not put it past him as an artist) as there were other economical factors that shaped the final episodes of Evangelion, but it’s important that we recognize how good animation can define a scene. It is the bridge that helps the vehicle of plot arrive at its destination.

One of the greatest animators of our age, Yoshinari does an phenomenal job in following through with the director’s desires, while having the artistic integrity to deviate and create something new. An animator should always push to draw their wildest dreams, but is is also the duty of the director to keep that energy focused, and when that dichotomy balances out it results in greatness.

It can be argued that the voice is the soul of an animated character. The actor/actress tries to match their voice to the aesthetic of the character to make the separate pieces of sound and animation appear as one cohesive whole. At the same time, no matter how convincing the voice may be, the vocal performance must have a body to voice. This is why character animation is so important, it is the personality of the voiced soul, shaping it into an aesthetic form. And even though Virgin Soul has quite a few flaws, this is one of the shining successes of the series.

The primary goal of character animation is to emote and to incite emotion from the viewer. The constant stream of Virgin Soul on my Twitter feed is comprised of various faces of Nina, and whether it’s out of adoration or memery it’s an indication that her character resonates with others on some level. The reaction in the above clips is a prime indication of the former, where she clearly displays embarrassment in robust, nonverbal communication.

The medium shot keeps both actors in frame, but cuts off everything below the waist, putting the focus completely on the face. Nina stands closer to the camera, directing the eye to her movements. She squashes her cheeks in an expressive use of squash and stretch principles, eyes like a deer in headlights. Her frantic whipping back and forth (looking for a quick escape from the humiliation) is accented by the secondary action her hair bobbing back and forth, which is absolutely endearing. And although it sounds very much like a math devoid of elegance, the sum of its parts are characterizing, the attention to detail exudes an air of sincerity.