So you’ve been waiting for it, and here it is: Sakuga and Cinema. The goal of this series of articles is to go over whatever I watched this week and pick out the best clips of animation and/or cinematography. I hope to inform and expose readers to the technical side of the craft and hopefully entice readers into watching something new they never thought they wanted to see. Think of it as an appreciation of the wonderful craft we all love so dearly, but for various shows and episodes. After reading this, be sure to leave a comment below telling us if you enjoyed it or if there’s anything you’d like to see from future posts like this! Your feedback is appreciated and read!

With the new season we finally get the long awaited Attack on Titan season 2. I absolutely dread Attack on Titan, I find a lot about the show to be really sub par and poor theatrics, but what I do like is Arifumi Imai. He’s the man responsible for the best cuts in the first season of Attack on Titan, not to mention parts of the amazing showdown between Genos and Saitama from last year’s One Punch Man.

This cut very indicative of Imai’s signature style: frantic (yet melodic) camera movement with objects zooming in and out of the extreme foreground. And that style has been extremely present in his work on Titan. The opening of season two is no exception.

The secret to the fluidity of Amai’s camera movement is how he tethers it to an action or movement. He starts the cut with the horse swerving around a tumbling boulder: the focus entirely on an action – the impact of the massive stone. We see the stone a ways off, building anticipation, heightening the final push of the camera into the middle of the action. But as that action ends, Mikasa swings in on her vertical maneuvering equipment and you’ll notice how her blades and cables take a smeared shape similar to Saitama and Genos in the first clip.

As the camera is moving away in a frenzied attempt to escape, Mikasa closes the gap in the classic Imai manner with frenzied sweeps and jabs into the very limits of the foreground. This highly kinetic technique continues as she grapples Eren in a merry-go-round motion, while here it is used to build momentum for moving away from the camera. But let’s not overlook the flips and spins that Mikasa makes while airborne. Perhaps the most astonishing part of all of this is how on-modal and uniform it is, no matter the perspective, no matter the angle. And that’s quite an impressive feat, given that nearly all of this is animated on-the-twos and it never stops moving.

The whole sequence is dripping in Imai’s style, and you can see that when you watch both clips back to back and compare them. The boulders and debris take similar shapes, not completely cubed, rather very oval with random corners jutting out. Perhaps the most striking similarity is the lightning and electricity that makes a brief appearance in both clips. The only thing that is missing from this opening sequence is the legendary Imai slowdown, which would be hard to fit into an opening. And last but not least, Titan Eren’s flailing tongue is perhaps the coolest addition to it all.

There was another clip from Imai this episode as well, featuring the same low angles and flowing camera. The clip even ends on the same extreme close-up of the eye as was featured in the sequence from the opening. Yet more impressive than this was the team up between Satoshi Saki and Takuma Ebisu, where the beastly titan chucks a horse.

Ebisu (0:17 and onward) knows how to capture visceral force through effects animation. Whether it be wind, sparks, or impacts, Ebisu communicates weight through his effects – the heavier and more pronounced they are the more force/mass the object is carrying. It’s a simple visual math that is extremely easy to understand and makes for excellent visuals. Saki on the other hand (the first half of the clip) displays force and mass through lighting, often making things darker to seem heavier, but more in the sense of mood, creating an understanding of ‘the darker/heavier the mood, the darker and heavier the object’.

Changing gears, I made my first foray into Pokemon Sun and Moon with the recent episode 18, and I regret not picking this up when it started.

Anime by nature is constructed of layers. You have the actors on top of the backgrounds, with effects and other objects being layered over the layer containing the actors – and that’s just a simplistic view of it. Often times there is more than one layer of background to add a sense of depth, this is because closer objects move faster than farther objects. Looking over a landscape with rolling hills while driving in a car, the distant hills pass by much slower than the telephone pole at the side of the street, multiple layers emulate that. But obviously this multiplicity of layers causes problems when attempting to move into that depth. Here, Pokemon solves that by making the shot a closeup, omitting the finer details of the surrounding area and choosing to simply zoom in. It just goes to show that not all good animation is a baroque display with thousands of compiled drawings.

Last but not least in this shot is the impact cut with friendly colors and shapes that exactly matches the severity of an attack in Pokemon. It’s super effective.

The technique of reusing animation is not new to anime, in fact it’s actually one of the  pillars it was founded upon. In order to keep children’s shows affordable, shots where multi-purposed until they were etched into the viewers’ psyche. Unexpected, however, was Sun and Moon 18’s use of that technique to obtain comedy. I found myself laughing just as hard as the intended 10 year-old audience.

To continue the discussion of animation’s challenge with movement into depth, another daunting task is camera movement. All cinema functions based off the viewpoint of the camera, and it is understood that the camera is our portal into viewing a world not our own. We human beings are not static in our viewpoint, which is why a static camera can feel so unnatural or alienating at times. Thus a commonly applied technique in cinema is to move the camera as if the audience themselves where moving (typically we call these dolly, crane, or tracking shots depending on the movement) to illicit an emotional  response as if they were there.

But in order for animation to achieve this, vast amounts of labor is required to redraw the same object and actors from each layer to match the shifting perspective. It’s an amazing display of showmanship to see a camera move into and around a space without limitation. The Team Rocket skit does all this, and it’s liberating.

Tadaaki Miyata’s ability to keep things in perspective is astonishing. A rose is thrown into the camera, giving us the true sense of an object moving through depth. Walk cycles are not only anatomically correct, but are matched by shadows on the ground which are elongated to display greater detail of movement. The camera then swoops in, making several turns as each Rocket member continues to move. Just contemplating the sheer number of pictures used to carry that action and movement smoothly, I am astonished. I used the word baroque before, and it certainly applies here.

A certain amount of attention also need to be turned to the name Yoshitaka Makino, who my good friend @El_Aleph87 tells me was the sole credited story boarder for episode 3, the episode where this skit is introduced. It’s likely that the minimalist backgrounds and camera movements were plotted out by Makino in the storyboard stages, while Miyata was the hand to make it happen. What also needs to be mentioned was the vision to add all the post processing effects, the thicker and more angular linework adding a hard-edge depth that would be too mushy to depict with traditional shading.

Studio Pierrot is one of my favorite animation studios of all time, and in my opinion their staff kinda fly under the radar in terms of just how awesome they are. Granted, not every show they do it the runaway hit of the season, but when they do get a show where the staff can go all out (a la Osomatsu-san, Yu Yu Hakusho, Urusei Yatsura) the results are amazing. Take for example this opening cut of Boruto:

Kicking off the series with the above cut is Chengxi Huang, a young Chinese animator with the skills to rival the veterans around him! Some top notch wind and fabric effects with a realistic depiction of weight and tenuous ply. The above cut is only a few seconds long, hardly lasting on screen, but little shots like these are important for establishing tone. Good animation feeds us information (in this case how hard is the wind blowing, what type of fabric the actors are wearing, etc.) and does so subtly. In small scenes like this, the world is being built.

Note: Check back here for an interview with Chengxi Huang in the coming days!

The opening for the series is an astonishing display of color and animation, but what really impressed me was the cut by Ken’ichi Fujisawa right after it. A master animator and Pierrot regular, I can only describe Fujisawa’s style as bouncy. What I mean by that is you’ll notice the more you watch his stuff is that his follow-through action animation tends to have a slightly perceivable push back; a sort of springiness to them. The parkour cut with Boruto and Shikadai was phenomenal for this reason, and the constant bouncing gave a life to the city while at the same time bringing us back into familiar territory.

Smears ahoy! Since a lot of the shots in this back-alley scuffle are closeups or medium shots, there isn’t a lot of the set in the shot, most of the background is alley wall with little depiction of how much space these actors are in. This is where smears and blurs have the most effect, reducing detail and often changing shape to demonstrate a great amount of velocity being applied to an object. Here it’s a shortcut to keep the shot composition tight on the action but still providing the same information. A similar effect was used when Konohamaru blocks Boruto’s blows, but with more emphasis on speed lines. And as fate would have it, it’s another Chengxi Huang cut! 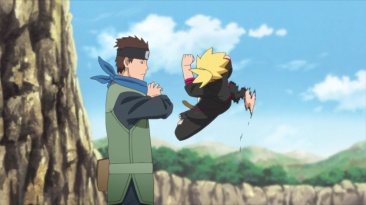 That what I saw this week! With a new season comes plenty to talk about, and I have quite a few shows in the backlog to finish (looking at the last five episodes of Utena). I’m not going to restrict this column to what is currently airing, but that is what tends to happen with a new season. Have a show or a particular scene you want me to cover? Got thoughts and opinions? Share them in the comments below and tell me what you enjoyed (or didn’t).