Sports anime tends to rely on characterization. To some extent, it doesn’t really matter what sport is being played. Typically, in a storytelling setting, we are more concerned with the growth of the players and their successes and failures than we are with the nitty-gritty technicalities of the game. This is not to completely disregard what is being played, as often times in game challenges with facilitate character development, a rule will be framed as a trial to overcome. But from an animation perspective, a certain sport will dictate specific movements, and movement is a key element when it comes to characterization.

Character animation in Welcome to the Ballroom tends to strive for realism, every once in a while dipping into beautiful displays of expressionism as we saw last episode. The realistic movements ground Ballroom, setting a baseline expectation in visual tonality of the show. This control of tone is not established by a singular moment of character animation, but by a compounded constancy that we as an audience can establish as a reality.

With that mentality, more subtle shots, such as the one above, take on a life of their own. Animation is composed of compiled drawings, and these drawings move quickly to give the illusion of movement. Typically, theatrical cinema is shot at roughly 24 frames per second, and is considered lifelike movement in terms that it imitates movement at a similar rate to what we see in real life. Holding animation to the same standard, 24 frames per second would mean 24 drawings with minuscule change would be needed to perfectly emulate the same motion, each drawing appearing on screen for only 4 milliseconds. Obviously this is a feat that is pretty close to impossible, so instead most animators ‘cheat’ by having drawings last longer than a single frame. And once again, ibcf did a much better job talking about the topic which I suggest you read in your journey of understanding animation.

What it boils down to is that some drawings last on screen longer than others, and that timing is key to depicting lifelike motion. All the same drawings can be played one after another, but without the proper timing, the illusion of life is lost. What makes this clap so believable is the speed at which the hands move. The hands are quicker to close (making the clap noise) than they are to pull away. Our eyes pick up on this and see more motion going into making the noise which builds anticipation for the actual clapping sound.  A certain rhythmic element is required of the animator to lock into such a realistic show of motion, very akin to dance itself.

On the other side of this realism, there’s the expressionistic side of character acting. A great example of this is the slowdown and smears in this clip.

Smears are a wonderful tool that a lot of people say look nice, but forget their practical application. Smears literally smear the timing of an action, and are often times used when a movement is considered too fast for realistic drawing (like the clapping). And this dance sequence is riddled with them. 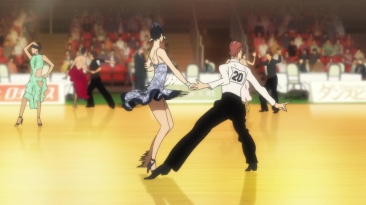 Quick steps and twirls are accentuated by blurred motion and speedlines. Poses are laced one after another, but the smears make them so smooth that the dance appears super fluid and smooth, nearly serene. Complete 180° turns are dome int the blink of an eye, but feel completely natural because the smear tells us it was fast. We don’t actually have to witness the speed when signs of speed are present.

But let’s not pretend that this shot is devoid of the realism afore mentioned. Kiyoharu’s hip movements are evocative because there is a sense of realism to them. Perhaps more characterizing is the smile which has a near sinister tinge to it. Mixing the two emotions, we can see there is something alluring and yet intimidating about Kiyoharu as is made evident from his dancing. For a moment, we as the viewer see Kiyoharu as Tatara sees him.

And now it’s time for the third and final bonus video. The final few crowd questions are answered and the final sketch finished. Remember, these videos and other specialties were first on our Patreon all at once! If that’s something you’d like to seeing the future, consider supporting us there! Enjoy the video!