A BIG THANKS TO MY FRIEND, XIN, WITHOUT WHOM THIS INTERVIEW WOULD NOT HAVE BEEN POSSIBLE!

Perhaps one of the most superbly animated shows of the Fall 2016 season, Haikyuu!! season 3 Karasuno Koukou VS Shiratorizawa Gakuen Koukou stuns with it’s level of quality and attention to visceral detail. It’s been a big year for the series, with half of season two bleeding into the beginning of the year, the two biggest matches of the series started and finished the year. But what truly made this year great was the amazing animation.

Luckily enough, Wave Motion Cannon was able to ask Boya Liang (on Twitter as @nuiya), about her scenes in the series and how she made us jump and cheer as if we were at the game. Liang also boasts an impressive resume as a key animator working at MadHouse, working on hit shows like Hunter x Hunter (2011), and Death Parade. It was our pleasure to sit down and ask her about the craft.

What is your background as an animator?

I feel so lucky that I was born in Guangdong (a coastal city in China). It gave me the chance to come in contact with Japanese anime brought in by Hong Kong TV and dubbed with Cantonese (and to this day I haven’t watched  the Japanese version of Chūka Ichiban!). Maybe because I have memories like that I was attracted to anime… 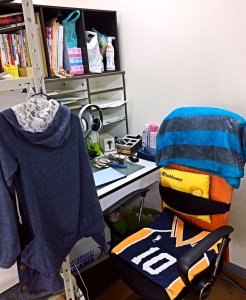 Tell us a little bit about how you started in the animation industry. How long have you been animating? What were some of the first shows you worked on?

Like most animators, I  loved drawing in my early school days, and when high school year came around I chose to be an art talented student (TL Note: in China, students would chose their major, arts or science, in high school). In 2007, in order to further my study, I came to Japan. After finishing my linguistic study, I was in a professional school to learn drawing.  I graduated in 2011, then directly joined Madhouse as an animator. After 1 year of working, I passed the test and became a key animator. Actually, my parents worried so much about that I could not support myself in a totally strange environment so they were not so supportive to my decisions at the start. But finally I convinced them with my performance.

Who are some animators that you look up to? Are there any styles or techniques that you try to emulate from them?

Before coming into anime industry. I was not so familiar with sakuga. So I was effected a lot by my colleague (over the same working period with me) who introduced me Toshiyuki Inoue. Then it stimulated my interests to realism sakuga style. As for herself, she preferred Masaaki Yuasa (laugh). One of the reasons I like realism is that feels so vivid, but yet different from rotoscoping. It shows the ability of animators how to draw good poses and actions. Good movements not only look cool, but give audiences the sense of immersion. I can’t tell you what my personal style is like, I currently don’t know (laugh), but maybe tending to be realism some day.

I haven’t developed regular sakuga habits yet (laugh).  I used to write on the x-sheet after finishing key frame, but now I do exactly the opposite.

How much time does it normally take you to animate a cut? Do you produce a lot of key frames?

The time it takes for one cut really depends on the situation. If I get an idea, the time it takes will be short, but most time I draw slowly. I stop and think a lot now compared to my earlier time as an animator. Maybe a cut or a cut and a half cut each day? After all, quality is the most important.

How many hours a week do you spend working? We hear a lot of stories about animators being overworked.

Working hours is also not definite, usually there’s one rest day each week – depends on the work load. You might get two rest days or you could be awake all week 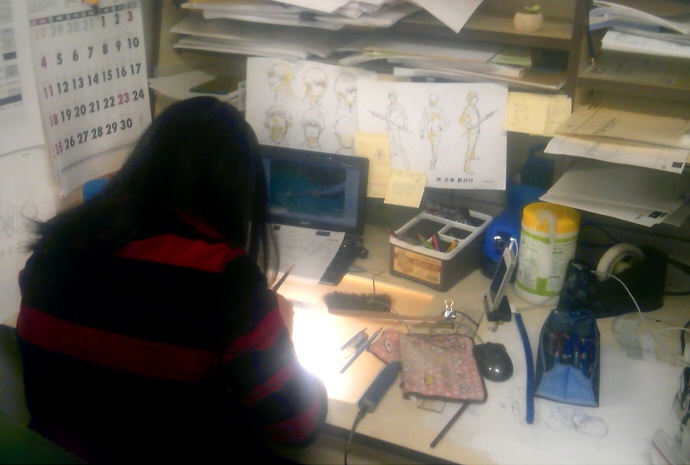 What was it like being part of the Young Animator Training Project? Can you describe you time there?

I didn’t know about this project at first. It just so happens that I was finishing the key animator test (at Madhouse) when one of the staff said, ‘Why not give a try?’ so I was in. That is really an important and useful experience. I didn’t have much experience being a key animator, but thanks to the project I met a good teacher there. It is really really helpful.

You transitioned from being a in-betweener to a full time key animator working on Hunter x Hunter (2011) – what was that like? At what point did you start doing keys?

After Anime Mirai (2013), I just wanted to put all my attention on Hunter x Hunter. The same time I finished, HxH just finished the Greed Island arc, and would be soon airing a story arc which hadn’t been animated ever before – the Chimera Ant. I was so happy to be a key animator! I loved HxH a lot back when I was still in China. I had already watched the first anime adaptation and read the manga. I never imagined I would have the opportunity to draw it with my own hands. I thought, “Since I had the chance, I should value the opportunity and go for it.”

To be honest, my time working in HxH was very short, and compared to other anime, characters in HxH are easier to draw. Our in-between anime checker worried that we will get accustomed to drawing that easier style so he added difficulty on purpose. So basically I didn’t get too many chances to draw in the latter half of the show except for some important cuts. Personally, I prefer drawing more on works I like. (laugh)

In Hunter x Hunter episode 146, there’s a scene with Killua that really stands out from the rest of the episode because of its linework. Tell us what went into making that.

I felt so confused when reading the manga. “How do I design this scene?” ’cause the whole background is pure white. I only can express the emotion of hopelessness through lines. The director hoped to capture that scene by exposing the characters with a spotlight to show the loneliness. Previously, the scenes I had drawn were always composed of color. This time, I tried to display the texture of the lines, and in the still part, I retouched them several times to give it that shaky instability. In fact, I originally wanted to do it in crayon, but I didn’t have enough time to change tools; I was required to finish almost 60 frames within two weeks. I still regret that. Come the final animation check, the first time all the staff got together to watch the sample, I wasn’t satisfied with the scene, so I spent the whole night revising it. Thinking back, I still lacked experience at that time. I should have made more dedicated decisions earlier.

I spend most of my time with the 5th class (TL Note: Section 5). I’m not familiar with other classes. Sometimes we have competitions, or if we run into trouble we can always ask our senpai who take care in teaching us. The people in 5th class are very nice.

It is my understanding that Shingo Natsume storyboarded the entire opening sequence. I assume your cut follows it closely, or did you take liberties and deviate?

Almost followed the storyboard exactly. ‘Cause there is only 1 cut, I didn’t have much space to display my skills. At that moment, I was busy working the eyecatch. Luckily I finished in time.

Are they cuts assigned according to skill and specialty?

Cuts are not allocated by director. Animators can choose their favorite cut except for some especially difficult cuts, which would be assigned to a specific person.

You animated the scene in Haikyuu!! season 2, episode 20 where ‘Mad Dog’ (Kentarō Kyōtani) delivers an amazing spike. It’s a jaw dropping moment of powerful animation – perhaps the most powerful I have seen all year. Tell me about that scene. How long did it take you to animate? You packed so much emotion into it, what was running through your mind when you were animating that scene?

I feel extremely grateful that you like it! Thanks a lot! It’s a coincidence that the production manager asked me to give it a try. I was not so confident at that time, but I thought it was a chance to promote my skill, so I took it! As for the spike, it  was demanded in storyboard, but I didn’t have any spike drawing experience, so I referenced the spike scenes which others worked on before. But to my surprise, the lines in every spike scene have totally different personal styles. So I tried to find inspiration among them. Finally, there is a scene that Kageyama did a amazing serve in a prior episode. And I said, “That’s the feeling!” I took it as reference then started drawing. It didn’t take too much time to draft, hmm, maybe about day and a half (laugh)  I stayed up at that night! However, I tried again and again and drew the in-betweens myself when using the spike on the 2nd key animation. In the end, it took almost 4 days to finish it.

In the beginning, ‘Mad Dog’  places his hand in front of the camera, the moment his hand moves away he comes into view with a powerful spike. This idea came to me one night when I was reading the manga. I noticed the harsh style of Haruichi Furudate- sensei’s lines was so cool, so why not use it in the anime?  I was worried about it would influence the sound effect, but after sharing this idea with director, luckily it wasn’t an issue. As for whether or not to use a background, we also talked a lot about that. At last, in order to show the best texture of spike line, we decided to go with a monotone image. In my personal thinking, there are still many deficiencies, if there is a chance next time it must be better! 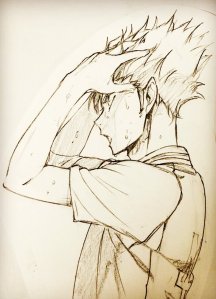 Out of all the characters in Haikyuu!!, do you have a favorite?

Nishinoya Yuu is my favorite! What a pity I didn’t get too much chance to draw him in season 2, so I put all my energy on him in season 3, just like I did before in HxH  exceopt there I only drew Kiluwa! (laugh)

Your scenes in Snow White with the Red Hair tend to be quieter and not action based. Was it hard to change gears between different styles?

I think the most hard part is the change from boys to girls. Lines and acting are completely two different extremes. Sometimes I got myself confused then the director would remind me, “Do remember, what you are drawing is a young girl!”（laugh)

As an animator are you an anime fan yourself?

Yeah, of course. I watch a lot like Fullmetal Alchemist,  TOUCH, Revolutionary Girl Utena, Toward the Terra, etc. Those are my favorites; I prefer anime with good storytelling.

Is there anything you would like to say to all of your English speaking fans?

I feel so grateful, please do support me in my following works! I love you guys!