Materials translated here were published in the Kizumonogatari Visual Guide Book. The interview has been translated by Twitter user @karice67  © 2017 Wave Motion Cannon

If you like animation coverage on Kizumonogatari and want to see more of it, support us on Patreon!

Koyomi wandering around aimlessly (or “Koyomi loitering about”)
The scene at the start of the film where Koyomi is roaming around the abandoned cram school. It was expanded greatly between script and storyboard; we follow Koyomi for a long time as he behaves in a frightened manner, as if he is being chased by something.

In the show itself, we can’t see Koyomi’s expression when the camera arcs around him, but it’s clearly depicted in the second key animation frame here.

Animation Director: Hiroki Yamamura
“My main responsibility as animation director was for the B-part of the film (from the point where Koyomi wakes up in the abandoned cram school), but I also drew key animation for the film’s opening act, up to the point where Koyomi climbs the spiral staircase. To make his movement more lifelike, I took video of someone doing the same thing and used it as a reference for my drawings. Not quite on the level of rotoscoping, but something close to it.”

Hiroki Yamamura’s oeuvre includes his work as Chief Animation Director on Puella Magi Madoka Magica the Movie Part III: Rebellion and as character designer for And Yet the Town Moves.

Koyomi on fire
The scene on the roof where Koyomi, bathed in the light of the sun, bursts into flames. This scene was also expanded immensely from both the novel and the script. The visual effect of the crows scattering was drawn by shading with a pencil lead, basically a process where we filled in the crows.

He leaves the building through an exit scattered with trash and debris, stepping into the dense shrubbery that is basking in the evening sun.
And suddenly, Koyomi’s entire body bursts into flames!
Koyomi: 「ARRGGGHHHHHHHHH!!」
An inhuman scream escapes Koyomi’s lips as he writhes in pain.
Koyomi: 「AHHHHHHHHHHHHH!!」
As he’s rolling around on the ground, trying to stamp out the flames, a voice calls out to him from inside the building.
Kiss-Shot (10): 「You fool!」
Koyomi turns at the sound of that voice, and sees the form of Kiss-Shot, glaring and yelling at him. 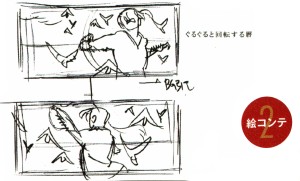 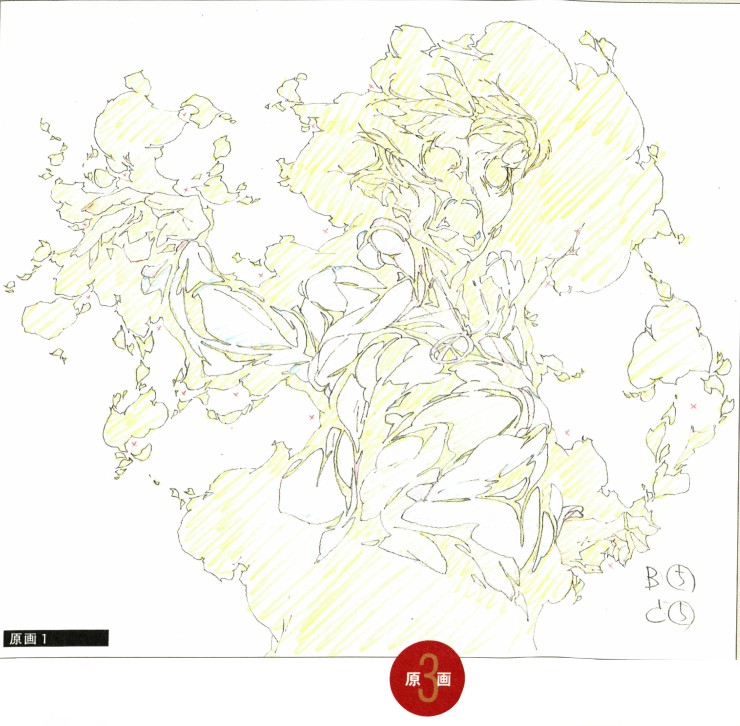 It probably looks like the scattering crows have been drawn randomly, but there are actually several set patterns for how they move. By putting these all together, we get a complex shot that makes it look as though the crows are all moving differently.

Main Animator: Gen’ichirō Abe
This scene, from the point where Koyomi exits the building until the opening sequence, was mine, and pretty much all I was doing was drawing the crows (laughs). They’re more-or-less hand-drawn. Only where the camera circles Koyomi did I ask for some 3D work. I drew five different flight patterns for the crows flying around him as he is burning, and designated them all so as to make them look random.

Gen’ichrō Abe’s oeuvre includes his work as Character Designer on Mekakucity Actors and as a key animator for Puella Magi Madoka Magica.

On the bench with Tsubasa
The scene where, following their sensational first encounter, Koyomi and Tsubasa sit and chat on a bench in a park by the sea. Amongst other things, Tsubasa’s mischievous facial expressions and the way her legs fidget are depicted in a charming manner.

With eyes that tell you she’s teasing him, and the mouth that is now shaped like a cat’s, this key animation frame conveys just how charming Tsubasa is.

Main Animator: Yoshio Kosakai
In this scene, I’ve tried to depict each and every move Tsubasa makes in a really charming way. The same thing applies for all other scenes, but in this case, I’ve focused my attention on adding character acting to the moments in the storyboard where the characters weren’t moving.

Yoshio Kosakai’s oeuvre includes his work as an Animation Director on Sasami-san@Ganbaranai and the Monogatari Series.

Koyomi draws back (or “Koyomi becomes withdrawn”)
The scene where Koyomi draws back into himself after Tsubasa asks “Huh? Araragi-kun, you actually have friends?” It’s a scene that you watch for their comedic exchanges. 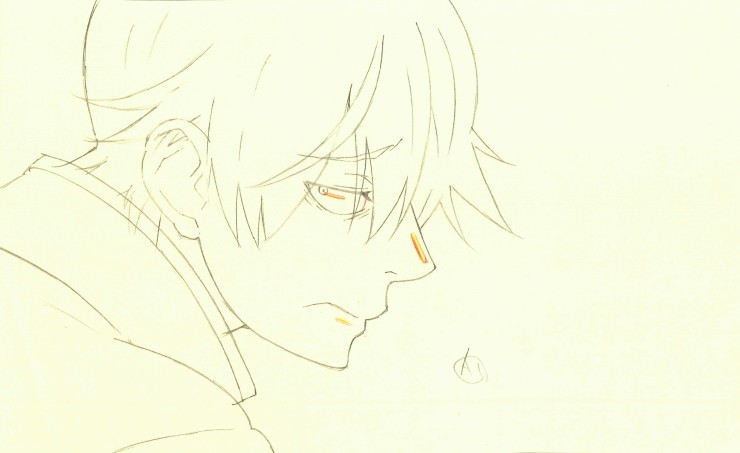 Just by looking at the way Koyomi’s eyes peek out from behind his long fringe in this corrected key animation frame, we can easily see that he’s drawn back into himself.

Character Designer, Animation Director: Hideyuki Morioka
When working on the key animation, I settled on many things after talking them through with Director Oishi. Like how to deal with the shadows under his eyes and where to put the highlights—all of this was different from how we did it for the TV series. In terms of corrections, I often found myself increasing the volume of Tsubasa Hanekawa’s breasts (chuckles).

Encountering Kiss-Shot
The scene where Koyomi encounters Kiss-Shot, having followed the trail of bloodstains to the station’s platform. In the script, it was a very simple scene, but it’s been extended in order to heighten the feeling of terror.

In this frame, you can feel the pressure from Kiss-Shot turning her gaze on you (Koyomi). The scattered bloodstains are also incredibly striking in the finished film.

The screaming and wailing Vampire
The scene where, realizing that Koyomi is on the verge of running away, Kiss-Shot cries and begs him to save her. It is incredibly painful to see this entity, who should be immortal, begging for her life. 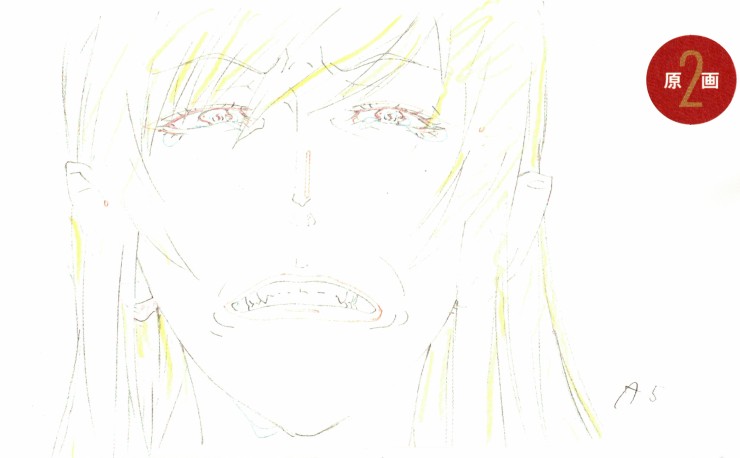 The creases at her mouth, her nose, and the tears welling up in her eyes—these details are all depicted in a vivid, real manner.

If you like what you’re reading and want to see more of it, support us on Patreon!