In the grim darkness of the year 201X, there is only backlog.

We live in a media-drenched landscape.

More anime is being created now than ever before. That is not hyperbole or helpful exaggeration, but rather simple fact. We live in an age where more anime content is being produced than ever before. Once you consider the ancillary materials he raw amount of shows to watch, manga to read, and tie-in games to play, there simply are not enough hours in the day to consume all the things that might interest you.

In fact, watching a long-running series now is something of a rare challenge. Whereas many anime shows of yesteryear readily numbered 50+ episodes, these days shows are built in 12-episode cours that rarely reach such lofty heights. Let’s not even delve into the social pariah-status that can result from watching anything other than what is currently airing weekly.

So, how then does one go about starting an extremely long show that runs into the hundreds of episodes?

This is a question I was faced with recently when I was deciding which new show to embark upon. In April I finished Gundam 00 – a thoroughly Sunrise experience through and through – and had not determined which show to tackle next. It had taken me quite a while to finish; 50 episodes is certainly no small number by most series standards. I was not entirely sure what to watch next, but I knew I wanted to go into it with gusto and finish it speedily. Seeking guidance, I made a choice that seldom ends well and asked Twitter what I should watch next. I expected a few tepid recommendations for a handful of shows.

Instead I was inundated with passionate pleas for a swathe of properties I had never seen before.  Yet among all of these titles one kept popping up with slightly more frequency – Gintama. Now, I had heard of Gintama before, but I knew next to nothing about it. Seeking a bit more information I did the thing wot one does in 2017 and popped over to Crunchyroll to see precisely what I would be in for. 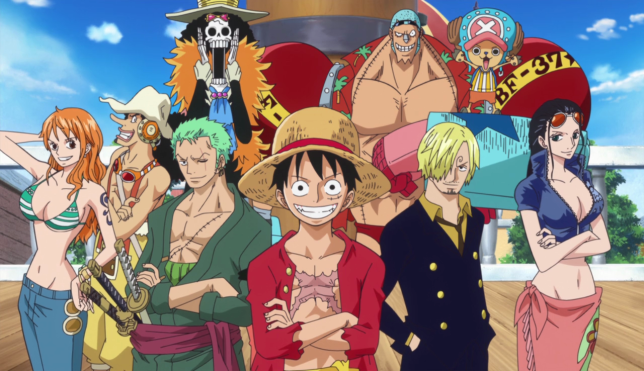 That was even more than I expected. A lot more. So of course I began to talk myself out of the idea almost immediately. Where was I going to find the time? If it had taken me two and half months to watch 50 episodes of Gundam, how long would it take me to watch a show with an episode count in the low-Spartans? I am an older fan, a withered husk of a man with a mortgage and too many winters behind me, would I even live to see the end of such an undertaking?

In order to finish this show before the heat death of the universe I would have to dedicate most of my free time to watching one thing. Was that even possible in 2017, the year of too much stuff to do?

After three months I have completed 183 episodes.

Honestly, I have been surprised at how relatively easy it has been, and how much I have gained from the experience. It turns out that these long-running shows are not completely inaccessible for newcomers like myself. My journey to the end of Gintama is not yet complete, but I thought I would share some insights that I have gleaned from the trek so far – perhaps they can help you try out something which seems daunting because of its size. Whether you want to watch a single long-running show (e.g. One Piece or Dragonball), or an entire franchise with numerous related entries (e.g. Gundam or JoJo’s), there are ways to mitigate the work load.

Connect with a community. Find a group of people in the fan community for the show you are about to watch. Staying connected with people who understand the show and are passionate for it can really help you stay the course. Whether they provide useful insights into the show’s production history, get you excited for upcoming story arcs, or simply cheer you on as you go, other fans are a priceless resource. Connecting with a positive group will make it feel like you are sharing the load of watching the series in question, rather than bearing the burden alone. For myself, the Gintama community has been an invaluable support network. They have given me the heads up for important groups of episodes that should be watched together, characters to look out for in future arcs, and insights that the mangaka has provided in interviews.

Set a reasonable deadline. Give yourself a completion date to work towards. Even if the date is as broad as “three months from now” or “next summer” that still serves a target to aim for. By setting a goal post to move towards, you add a sense of time and urgency to your viewing. With such long-form shows it helps to have a deadline that you are working towards, even if it seems distant – it took years to make that much content, so do not be surprised if it takes some time to catch up. In my Gintama viewing I set the target of completing the show by the end of this year, which meant I was looking at completing a 300+ episode show in about eight months. Not necessarily a grueling pace, but a relatively short window nevertheless.

Commit to a schedule. Make yourself a schedule for each week. This schedule can be as simple as “I will watch two episodes every day,” or as complex and specific as times and viewing blocks. Scheduling your viewing helps make reaching your deadline easier, and essentially gives smaller milestones to keep your motivation up. Be careful not to set a schedule that is too harsh, be reasonable about the time you can spend watching anime week-in and week-out. During this Gintama long-watch I set the target of two episodes per weekday, which gives me a reasonable pace of ten episodes per week/forty episodes per month. This allows me to take the weekends off when I am on schedule, and gives me catch-up days if I fall behind due to a busy week.

Track your progress. Keep some sort of record of your progress through the show. This can take many forms – blog posts at the end of each week, journal entries listing what you have seen, or live tweeting the episodes as you go. Tracking can be done in private or out in the open for others to follow as well. It may seem that this is an extraneous step, unnecessary bookkeeping that takes away valuable time that could be spent watching episodes. In fact, this is a helpful method for reflecting on what you have watched and keeping a record of your accomplishments that goes beyond the episode number. Perhaps the most important step I have taken while watching Gintama has been tweeting about each episode as I watch it, allowing for the community to join in and discuss the show with me as I go.

Allow yourself some breaks. Do not make watching a long-running show your entire life. Make sure you still engage in other activities: watching other anime, reading books, playing games, spending time with family, working, celebrating holidays, etc. Trying to watch a show with hundreds of episodes to the exclusion of anything else in your life will likely lead to burnout and exhaustion. You may end up viewing the show as a chore rather than entertainment. Even though I have made a lot of progress on Gintama in a short time, I have taken multiple breaks and still continued to engage in other activities. In fact, I started a second (much shorter) show to keep things interesting.

Hopefully these tips can help make consuming long-running shows a more realistic goal. If you have tackled any of the big series and have other advice or input, let me know in the comments below!