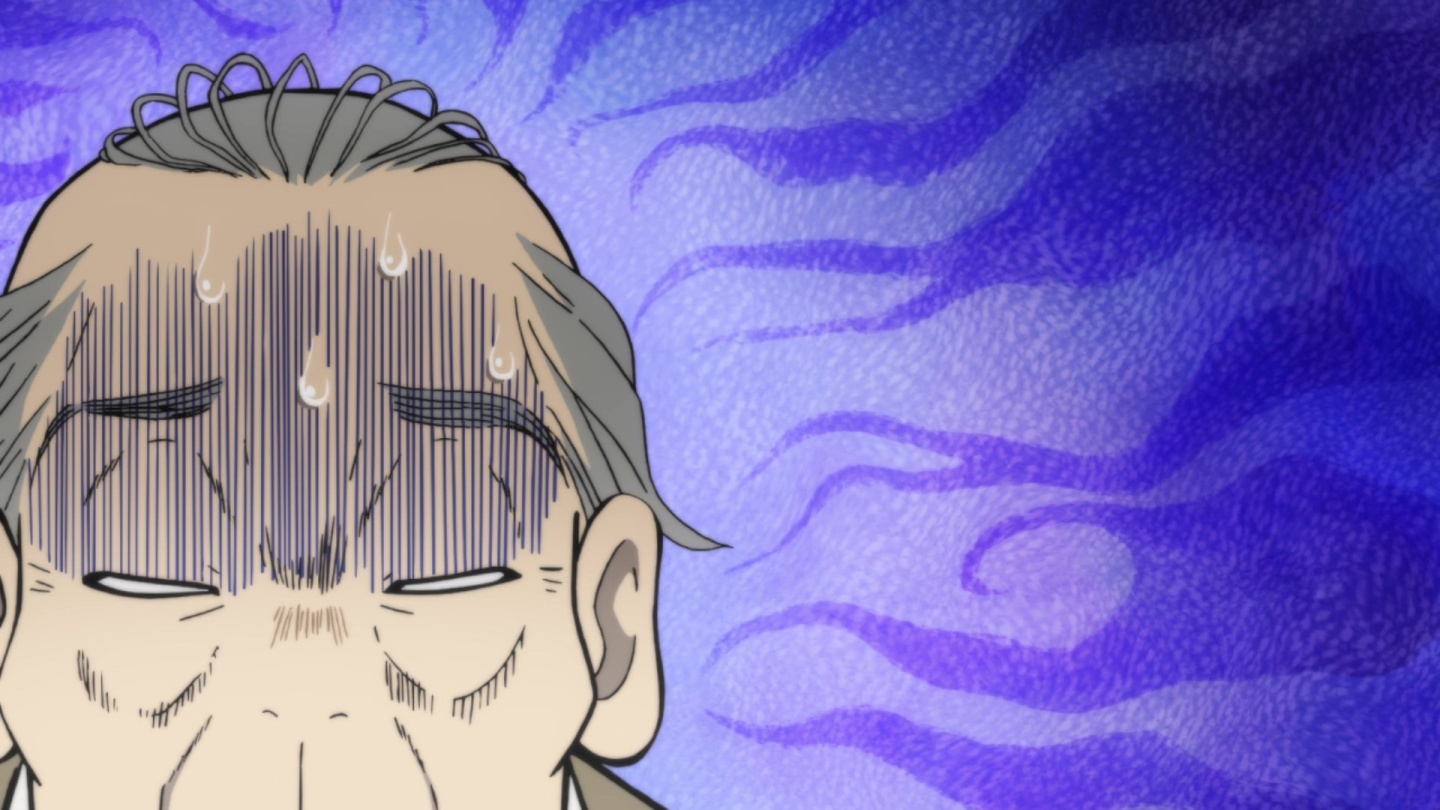 The story of Mr. Matsunaga is a touching one. While be it simple , I find it very fascinating how much we as an audience are able to sympathize with Mr. Matsunaga so quickly. All we’ve been told going into this episode is that he was an old man who’s been playing Shogi for forty years. One could get the impression that this means he’s bitter, but this brief description of him doesn’t give us any information about his personality or play style. But from the brief amount of time we spend with this character we learn a lot and develop a few feelings toward him. 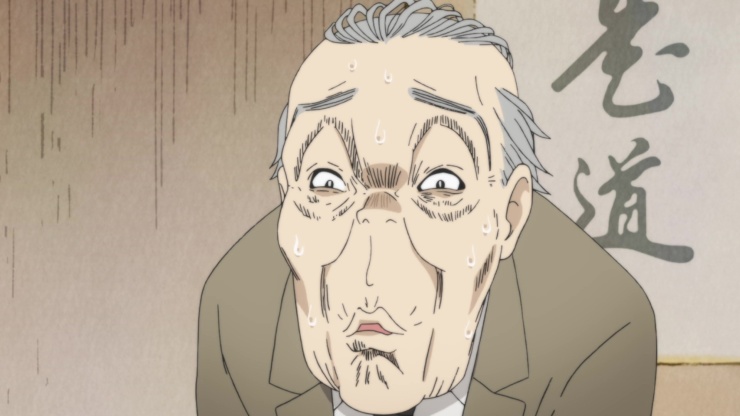 From the moment we see him, his face is drawn differently than the rest of the cast. Every character has these thick lines drawn around their lips that look like the lips of a lion, except for Mr. Matsunaga. I’ve always thought the design of the lips was an intentional choice to create the idea that these characters were like lions; creatures who are proud, confident and vicious. Mr. Matsunaga’s face is anything but those things. His face is sunken in and presents these ideas of sadness and defeat. His lips match the sink tone of the rest of his sunken face.

But even then, before the match, he’s seeking divine intervention to help him achieve victory. He’s lost all faith in his abilities as a Shogi player. This become clear when he starts to play against Rei. While Mr. Matsunaga plays advance strategies, he makes simple mistakes that ruins them. These mistakes stem either from forgetfulness or being overwhelmed by how much is going on in the game. Perhaps both. But what’s clear is that he’s no longer fit to be a professional player. 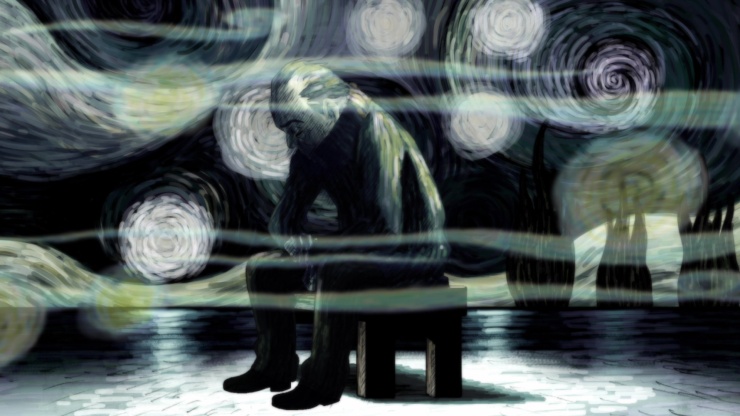 This all comes to a head when Rei asks him after the match if he still enjoys playing Shoji after his long career. It’s an interesting question for Rei to ask, given his struggles with not fully understanding his own feelings for the game. We discover that Mr. Matsunaga is also unsure how he feels himself. He knows his time is almost up as a professional and he’s getting passed by children who weren’t even alive when he started playing professionally, but he still enjoys playing against worthy opponents like Rei who treat the game with respect. It’s basically Rei asking an old man what’s the purpose of living. Rei’s finally getting the chance to talk to someone who’s experienced the life Rei is looking for and wants an honest answer, and Mr. Matsunaga’s answer shows he shares the same amount of uncertainty. Not just from a finical standpoint, but if either of them will be satisfied with their lives once it’s over. It’s a hard question that doesn’t have an answer, but I like see the show try and tackle big ideas like this.

“Despite my harsh words, I did enjoy this episode.”

My feelings on this episode are rather minimal, and I feel that’s because the story has been mishandled. Episode 8 and the visit from Kyoko set the stage for a tragic growth to occur: Rei was to squash Mr. Matsunaga, but only after an internal struggle over the  value he places in shogi. Instead this did not happen, in fact, I would argue that no character growth occurred at all. The happy ending of winning and having sacrificed nothing feels like having your cake and eating it too. The ending is not even one that’s inspired from Rei’s victory, ‘Because I had so much fun, I will never give up shogi! Thanks kid!’ 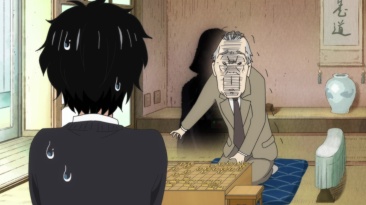 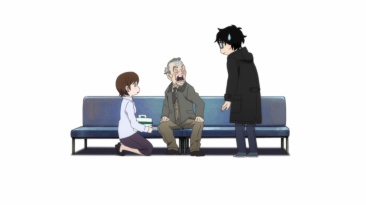 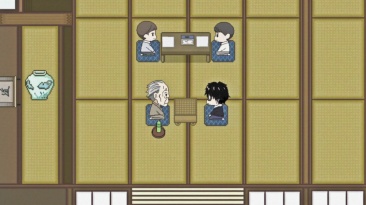 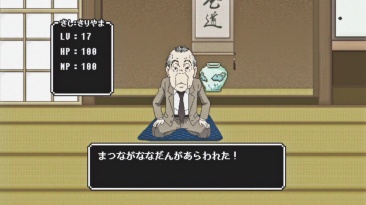 This episode resorted back to SHAFT-like gags that undermine the dramatic tension built in the preceding episode, which has me feeling like either that set up was squandered or perhaps episode 9 was. The tense match where the loser loses more than the game was subverted for a bait and switch of Matsunaga placing pieces incompetently and reaction shots from Rei. It was formulaic, and did get a few laughs out of me, overall managing to be enjoyable. But then I realized I am nine episodes and I have no investment as to what is going on screen. We laugh off Matsunaga’s loss, even call the character charming (which he is), but what if Rei had thrown the match? Would we have laughed it off? Or would we have been subjected to 15 minutes of water imagery and monologue flashback?

Despite my harsh words, I did enjoy this episode. But my critique is that it fails to allow even the possibility of failure to occur within the audience’s mind. It’s a mental environment that stifles potential character growth and causes all hardships to feel manufactured. Everyone in the show has a tragic backstory, but the uncertainty of the future is not taken into account. The plot of March comes in like a lion enters the stage on the wrong cues and seems to have forgotten it’s lines.

“This episode is a testament to how good March Comes in like a lion could be if fitted with ambitious staff.”

We’re finally into some shogi matches in March comes in like a lion and already we’re seeing huge improvements to the flow and focus of the series. Episode 9 is perhaps the strongest yet, managing a careful balance between comedy and drama while utilizing more unique, non-derivative visual techniques that complement the material. This is due in part to the unexpected appearance of Kazuya Sakamoto on storyboards, a Kyoto Animation veteran who went freelance in 2012. 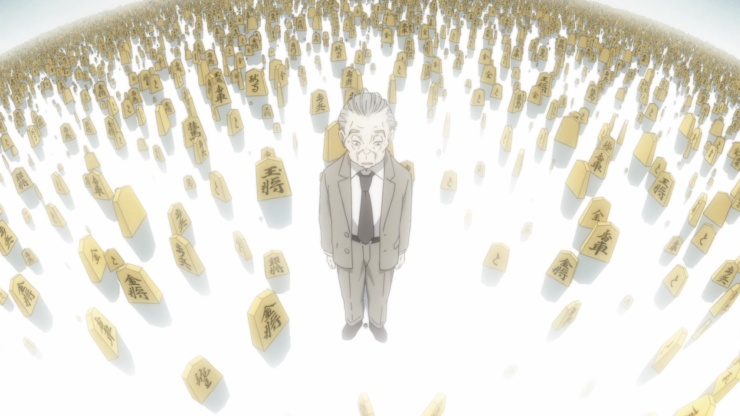 Though he has worked on a variety of Kyoani properties over the years Sakamoto seems to take most influence from Yasuhiro Takemoto, who he collaborated with on Fullmetal Panic!: The Second Raid 13 very early in his career and continued to work alongside in Hyouka. Interestingly enough Takemoto himself was influenced by Shinbo so one of his protégés returning to a SHAFT property is almost like coming full-circle, but Sakamoto’s visuals feel almost refreshing in this series. That’s because he bucks the trend of amateur SHAFT-ists by approaching the episode with genuine ingenuity and none of the fluff. The layouts are remarkably varied and embellishments are creative and tasteful enough to not break the mood.

One of these embellishments, of course, is the faux-RPG sequence during Rei and Mr. Matsunaga’s match. It manages to not only be a one-off cut, expanding into an entire random encounter. Even the metaphorical storm surrounding the venue is pixilated to match the style! As odd a choice as this may be, it somehow fits well with the amusing atmosphere of the scene, something that’s so often neglected by the staff who have handle the show thus far. And later on, as the two are drinking, a wide variety of overlays are used to give texture to Matsunaga’s ramblings (which mirrors a certain other scene in Nichijou 11, also boarded by Sakamoto). Perhaps my favorite moment during this has a portrait of a feudal lord transition seamlessly into Matsunaga himself, who continues the rest of his rant in the traditional clothes of a Japanese ruler. I hope to see more scenes in this series as playful and distinct as this one. Finally, I’d like to respect that, in the climax of the episode, the only sound was Matsunaga’s own choked-up words. No support of music or sound effect, just sole reliance on the delivery of the voice actor, who succeeds supremely. 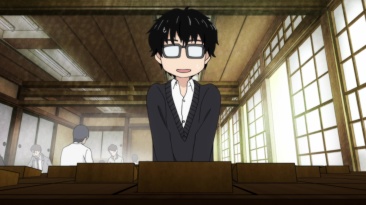 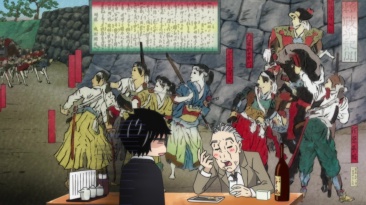 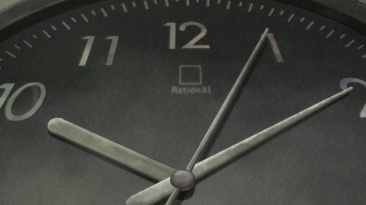 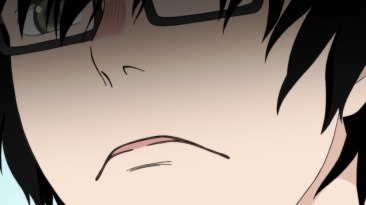 This episode is a testament to how good March comes in like a lion could be if fitted with ambitious staff. I have practically no complaints this week, though the episode isn’t particularly well produced it manages to overcome its shortcomings soundly. I only hope the less experienced directors and storyboarders take note of this success and consider taking the risk to apply more creativity to their own works.