Anime as a medium frequently relies on abstract art styles in order to more effectively convey meaning. The oversized eyes associated with anime, for example, exist because so much of human expression is read through the eyes, so exaggerated eyes also exaggerate the expressions, making them more visible and clear. Anime also utilizes specific abstract icons that exaggerate more realistic responses and create a visual language for anime, such as sweat drops for embarrassment or protruding veins for anger. In Scott McCloud’s Understanding Comics, he explains why iconic imagery like this is such a strength of drawn (or animated) mediums: because while realistic images are able to better emulate reality, they also restrict meaning. Images abstracted in a way that simplifies them turns them into an idea that can be more broadly applied and more easily understood.

The Tatami Galaxy is an anime that particularly relies on these techniques, using exaggerated abstraction and heavy use of symbols to create immediately recognizable meaning and purpose, as well as highlighting the protagonist’s warped and biased perception of the world around him.

These artistic choices are important because The Tatami Galaxy’s point-of-view is about as first-person as is possible in a traditionally third-person medium. The nameless protagonist (Usually dubbed “Watashi” in discussions of the show, after the formal pronoun he uses to refer to himself) provides near-constant narration, and it becomes clear early on that most of what we see is tainted by his perspective. When he talks about finding a “rose-colored campus life,” the world is filled with pink, as if he is looking at the world through literal rose-colored glasses. When he is drunk, his face is red and his motions become more loose and fluid. When he locks up in front of a girl he likes, his design becomes cubist, reflecting both his rigidity and jumbled thoughts.

In addition, the world around him distorts to match his outlook towards it. In the second episode, Watashi joins the film circle and feels his creative visions are being smothered by the president of the circle, Jougasaki. Since Watashi’s first impressions of the man are that he is an arrogant blowhard and a dictator, the visuals shift to match Watashi’s opinons. When Jougasaki gives a speech to members of the circle, they are dressed in military uniforms. In his more lecherous moments, his normally handsome face is distorted grotesquely to make him seem unappealing. In one of my personal favorite moments, Jougasaki is shown being carried on a palanquin, preaching to his followers as they fan him. A moment later, the veneer is stripped away and we are shown that he is actually drunk and being supported by two friends. 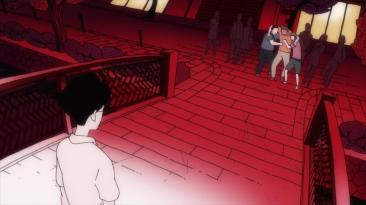 This is a heavy-handed form of storytelling, but it is a necessary one because the audience needs to recognize all of Watashi’s biases and understand them instantly. Each episode is a stand-alone story that follows the same general structure but follows Watashi after he makes a completely different life choice. Each episode’s individual ideas and metaphors need to be communicated quickly and concisely, which is exactly what abstract symbols are best at. The people Watashi encounters become two-dimensional ideas rather than actual people, simplifying them to core elements and making them easier to understand.

This choice ironically makes these characters feel more real by the end and emphasizes The Tatami Galaxy’s message in the process. In each individual episode, Watashi sees the other characters in a certain way because he only has one perspective from which he views them. The imagery through which his biased perspectives are shown are used so blatantly that their absence in later episodes is immediately noticeable. As previously mentioned, when he is in the film circle, he sees Jougasaki as a dictator and a blowhard. However, the unflattering imagery used to portray him is completely gone in other episodes when Watashi encounters Jougasaki under different circumstances—for example, training him for an athletic competition, employing him to care for his love doll, or becoming the target of his master’s pranks in the proxy-proxy war. The characters themselves do not change, but the lens through which the audience observes them does, slowly developing the characters by adding new perspectives.

It is in the final two episodes that The Tatami Galaxy explicitly illustrates this, and the purpose for choosing such an abstract, iconic art style becomes even clearer. As Watashi wanders from universe to universe and sees what his life could have been like, he begins to realize just how limited all his perspectives in each universe were. This is represented with a two-dimensional image of Jougasaki slowly becoming more and more three-dimensional, until he becomes how we’ve come to see him through his appearances throughout each episode: a complex, nuanced character.

With this in mind, Watashi reexamines his opinions of Ozu, his mischievous antagonist. Ozu has been portrayed the entire series as a grotesque, almost supernatural creature, referred to as a youkai, an extra-terrestrial, and a demon, among other things. However, Watashi is finally able to pierce through the veil of his own biases and recognize just who Ozu is as a person and how much he truly appreciated him. When Watashi meets Ozu again, we finally see him as he truly is. His trademark pointed teeth are gone, and he actually has quite a gentle face. In fact, when Watashi confronts Ozu at the end of the series, he does so in a more devilish, antagonistic way. When Ozu asks why Watashi has taken such an interest in him, he takes on Ozu’s previous features, echoing his own words: “It’s how I show my love.” Watashi now understands the nature of his relationship with Ozu, and consequently, how Ozu must be perceiving him. 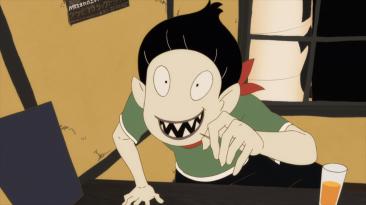 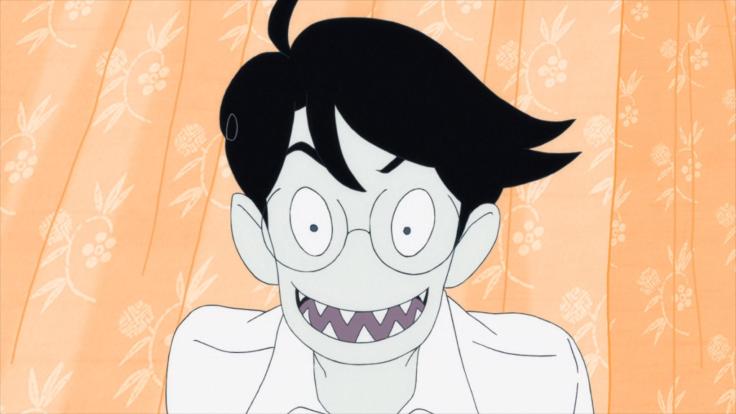 The Tatami Galaxy’s abstract art style allows it to project easily understood symbols onto the world, guiding how you perceive it before resetting the world and turning everything you have learned on its head. This is to draw attention to something most of us are guilty of. Humans have a tendency to categorize things for the sake of simplicity, and that includes other humans. We form biases quickly, and those biases provide obstacles preventing further understanding. The Tatami Galaxy’s art style, through its use of symbols and abstraction, makes Watashi a character it is easy for the audience to project themselves onto and see the world through. Furthermore, it creates a world that is rich in meaning but only partially based in reality. This is the limited, warped reality we cling to that The Tatami Galaxy urges us to break free of. Two-dimensional people are easy to understand and accept, but they simply are not real.