“Never have a felt an emotional response from a single drop of milk! ”

This episode was the exact push I felt it needed. Last week I stated I felt like it was time for Rei to start his comeback tour, and this looks to be the start of that. The pacing may not have quickened, but this episode does have several things going on, and that shift in attention is a welcome one. But not only this, the visual style skewed more on the softer side. Character designs where rounder and disarming and that makes everything feel much more personal.

Part of this is due to the character acting successfully communicated in the animation. An amazing scene of this was Akari’s only appearance in the episode. The scene is effective enough that I felt like I received my average episodic dosage of the character despite this being her only scene. The animation moves in sync with each syllable of her words, a slight camera jitter for added emphasis on the motion. Speed lines emphasize the incredible fluid motion (assisted by a blur placed on their feet) of the cats as they race each other. Those same speed lines take a circular pattern, becoming a dizzying ring as the cats blur into one solid ring at Araki’s feet, the camera pushing into a closeup of chaos.

With all the water imagery, it’s no surprise that that the 2 second cut of a drop of milk was so breath taking. A hyper realistic weight and motion is given to the droplet as it falls onto an abstract white background that responds as liquid. Never have a felt an emotional response from a single drop of milk! I believe this is mostly do the the monochromatic color. It’s something defined (droplet) falling into the undefined (white background), having an effect (the splash), and returning to nothing. In context, it was a brief splash of realism to further disarm you to the very chibi and ever adorable Momo. That is the power of good animation.

“This is the kind of storytelling I’ve been waiting to see in this show.”

This episode of Lion picks up right where the coda scene of episode 6 left off. We get a quick recap of Rei pondering why he can’t move forward, why losing matches in a game he doesn’t care about hurts him and why everything he does feels like a half-measure. Critically, Rei explicitly states that he understands what he’s feeling, but doesn’t know why he can’t move forward. If you have or have experienced depression, this would be a familiar sentiment. Rei knows what he’s feeling but awareness of his own depression itself doesn’t help him break free of it.

Starting off with such melancholy scene might be risky given we just experienced a full episode of the same last week, but it’s quickly offset by brighter, more humorous set piece. We cut to Rei and Hina’s crush, the star middle school baseball player named Takahashi, staring at each other across a table at fake-anime-McDonald’s. Rei feels intimidated by the younger, much taller and more serious looking boy.  As it turns out, the baseballer not only knows of Rei’s pro Shogi career, but he looks up to him as a profession who decided early how to achieve his goals.

One of the highlights of this episode comes when Takahashi asks Rei what made him decide to attend high school despite already being a working professional. The earnestness of the question gives Rei pause and he considers his answer carefully. The answer Rei provides resonates with the younger boy and the realization it made a positive impact gives Rei a kind of validation he rarely gets from himself: he and his words matter to other people. The visuals in this moment powerfully reinforce Rei’s feelings but more importantly, it lets a bit of the light into Rei’s world and allows his spirit to soar, if only for a moment. This is the kind of storytelling I’ve been waiting to see in this show.

From there we move on to another warm scene at the Kawamoto house, where Rei’s professional life is revealed to Hina and Momo by the well-meaning Takahashi. Takahashi has gone on to begin referring to him as “Kiriyama 5th Dan” as a sign of deference and respect, one which he seems wholly uncomfortable with. The ever-enjoyable Nikaido also makes a cameo in this episode with a bro-tastic, fiery (and nationally broadcasted) speech. After Rei makes a game losing move during the NHK Cup, Nikaido abandons his role as a commentator to tell Rei to take better care of himself and his shogi. Nikaido’s tirade thoroughly embarrasses Rei to the point of launching into an angry tirade of his own, to the general surprise and even bemusement of everyone. They realize, even if he doesn’t, as they spend more time with him that Rei has slowly begun to lower his guard and open up to the people that care about him.

This show always walks a careful balance of sharing Rei’s depression with the viewer and offering humorous interludes with more upbeat characters, brighter scenery and cozy family moments. Episode 6 served as an object lesson in why staying with Rei’s point of view for an extended period of time can drag down the show. Rei’s despair and sense of loneliness were emphasized in Episode 6 to an almost uncomfortable degree.  On the other hand, episode 7 serves as a refutation of depression itself. Rei begins to see that forming connections with others and not being afraid to open up can provide a path out of the darkness he lives in.

“I really like how this is the series answer for the best way to fight depression.”

This was a good conclusion to the story arc set up in the last episode. The story picks up directly at the end of the last chapter where Rei is forced into having an awkward moment with Hina’s crush, Takahashi. As it turns out, Takahashi is a fan of Rei’s, and looked up to him as an example of making your own way in life. I really like how this is the series answer for the best way to fight depression. Ultimately, all Takahashi did was tell Rei that he mattered, and sometimes that’s all you need to hear. It’s not the big gestures, but the little moments of kindness that make a difference.

The section where Rei teaches Hina how to play shogi is possibly my favorite scene up until this point. Rei’s antisocial tendencies get the better of him in the moment and he starts firing off the rules and explanation of the different pieces like an audiobook for a technical manual. He’s very dry, overwhelming Hina with information and going so fast it’s impossible to keep up with what he’s saying. The quick cuts in this scene perfectly capture that sense of being overwhelmed. Rei will talk in his monotone voice, it cuts to Hina with a notebook jotting down what Rei is saying, cut to a shogi board with the pieces floating about, close up a Rei, Hina with a thought bubble displaying she’s not understanding what he’s talking about, and then it just becomes this rapid fire of cuts between these shots as Rei gets more and more technical. The overall tone of confusion is captured perfectly here and makes for a charmingly comedic delivery.

As a contrast to that scene, the credit sequence is a fun, approachable introduction to shogi. Each of the pieces is represented by a cute kitty-cat warrior. A song plays in the background, introducing each piece with a short animation explaining how the piece moves and operates. Aside: (it’s worth noting that the Crunchyroll subtitles didn’t translate what the song said, but that still didn’t hinder me from understanding the explanation). These short little animations did a great job of explaining things like how knights move across the board and things of that nature. I really enjoyed it and would love to see more of these cute little scenes to better explain the game.

“There’s great chemistry between these characters that makes their interactions a joy to watch.”

March comes in like a lion 7 sees Shinsaku Sasaki returns to storyboard for the first time since episode one, though he is paired with an even greener episode director than Okada. Hidezaku Hara, who only this year moved up from production manager to episode direction, has (as far as I’ve found) only been credited for that role once before on Tatsunoko’s most recent PriPara movie. Again, Sasaki’s storyboards carry the visuals well enough, though they’re much safer than his work on the premiere outside of a few short scenes that are more tonally serious. Otherwise the visuals remain characteristically stiff, playing into SHAFT sensibilities with practically no interesting animation to speak of.

Fortunately it makes up for these shortcomings with character. Unlike most previous episodes there are no flashbacks or even instances of significant drama this week, but there are plenty of pleasantly cute moments that draw out a greater range of emotion from Rei. From being caught off-guard by the unlikeliest of fans or venting his frustrations in front of friends, we finally see more human aspects of his personality emerge. While building his relationship with Hina it seems her tendency to express her feelings is rubbing off on him.

There’s great chemistry between these characters that makes their interactions a joy to watch. The minor cast is so strongly characterized and charismatic that scenes where they’re grouped together, like where they’re watching Rei’s shogi match at the Kawamoto household, are still full of life despite the uninspired visuals and animation. While I can’t help but consider how much better the show could have been if it were being handled by more talented staff, we’re reaching the point where there is enough momentum that the strength of the source can motivate my enjoyment. 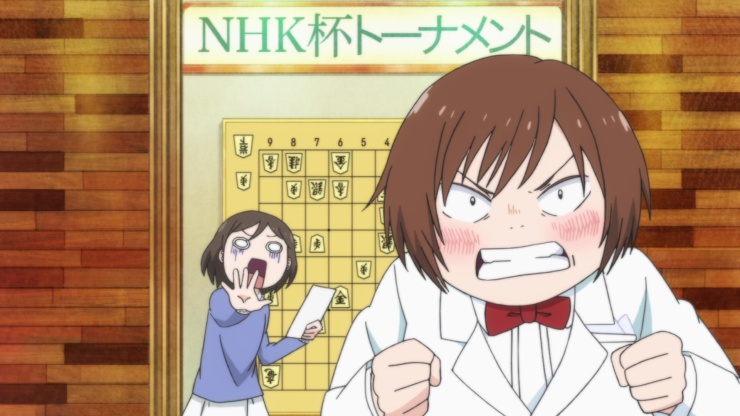 And one last thing: I loved that they incorporated Nikaido’s self-authored picture book into the ending using CG cats. The song is sugary-sweet, the models and animations are well made, and the pastel color design suits it all perfectly. The only problem is that Crunchyroll didn’t sub the song itself! Western audiences are going to be even less familiar with the basics of shogi than Hinata and Momo so this song really should have been localized. Hopefully fans will look up the rules on their own so to have a better grasp on games to come.