Be sure to check out the write-ups for prior episodes!
Episode 1 | Episode 2 | Episode 3

“…enough to keep the viewer interested, but not engaged.”

So come the end of episode 4 – I feel kinda of hollow, like the episode missed the mark. For all intents and purposes, this episode is meant to be a light and sweet day in the life of the characters. The visuals achieve this goal though reaction shots of various styles, which is enough to keep the viewer interested, but not engaged. The B part of the episode is the stronger half in this regard, as Akari has arguably received the strongest characterization thus far, and carries enough emotional weight to drive an episode on her own. Her reaction to Nikaidou feels more impactful and less superfluous than her sister’s fleeting crush on a soon-forgotten side character (who is so unimportant he isn’t even given dialog). While it may not advance the story in any meaningful manner, it controls it’s tone and follows through with character motivations.

What bother’s me about the first half of the episode is its over-obsession of following the source material to a tee. Rei’s memory of an unknown woman promises to advance the story, but fails to deliver, instead opting to continue the story as if the scene had never occurred. Up until this point, the tone and focus of the A part is on Hina’s struggle to make a bento for her crush, and this one scene shifts the focus back onto Rei, only to resolve Hina’s story in a detached and disingenuous manner. It’s a failure on the directorial staff’s part, and it hinders the episode greatly. It’s not an issue of tone – March comes in like a lion has the ability to swap between ‘heavy and oppressive’ to ‘light and endearing’ near flawlessly. But here the swap serves no purpose, and tells us nothing more than we already know. And like Hina’s bento, it tastes sour and bitter.

Animation takes a back seat, save for a bit of well placed character animation. Rei’s hair is carried by the wind, his expression impossible to read as he aquatints himself with Hina’s crush, the star of the baseball team. Hina on the other hand is absolutely enthralled, as her expression grows so does the size of her face. With as impressive of a player the young man is, he slams the first pitch out of the park, scoring an effortless home-run. The ball zips out of view into the sky, and with the same swoosh, Rei’s hair is caught in the same gust. It’s a simple visual language that says ‘Rei was moved’ – quite literally. A quick shot of the ball landing in a distant locale and Hina’s crush crossing home plate resolves the scene before we cut back to Rei. His stagnant face is unreadable, save for the sudden tilt of his glasses, which much like his hair, sends the same message – ‘impressed’. The emotion of the scene is communicated through visuals, not overlaid iner-monologue. We are shown, not told.

“…I’m completely sucked into the mystery of Rei’s previous life.”

Crying is one of those things that’s extremely difficult to get right in any sort of media. It’s often oversimplified to express the feeling sadness, while in reality a person crying could mean a lot of different things ranging from happiness to fear. A lazy director will only associate crying with sadness and force their characters to cry as a cheap way to get the audience to sympathize and connect with a character. After all, most people are biologically programmed to show empathy towards those shedding tears. It’s in our DNA and it can be hard to ignore. What those lazy directors don’t know is the more we are exposed towards that type of behavior, the less effect it has. You just can’t use the same trick over and over again to get us to feel the same way each time. A good director, like the one in this series, knows the complexity and delicate nature of crying and knows how, when and why you play that trick in a scene effectively. 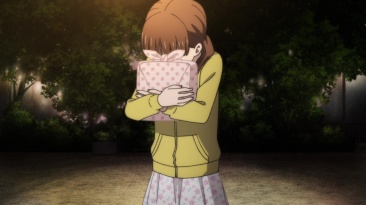 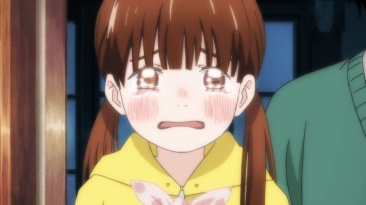 This week’s episode and last week’s episode both featured scenes of the middle sister, Hina crying. While these two scenes can seem like the same thing at a glance, they are very different from each other emotionally. The first scene dealt with unleashing a pain deep within after hiding it for far too long, while this week’s episode dealt with shame and embarrassment. While both scene are beautifully depicted as private moments nobody else is supposed to see, the tone is completely different in each one. The first is raw pain. Hina belts out screams from deep within her gut, desperately trying to let those bottled up emotions go. It’s exhausting to watching, and I do mean that in a good way. The other is more reserved. She’s holding a bento box over a trash can and her face looks at it with self-loathing. While the first scene is about letting go, the second scene depicts receiving pain. This bento box that she has worked so hard and had to get Rei to pay for has backfired on her, and that box represents her failures. Not just as a failed attempt at impressing a possible boyfriend, but failing as a human being. It was supposed to be this simple task and she blew it. She’ll never live up to her sister’s expectations and she wasted precious time and money that she’ll never get back. She’s torturing herself with this simple little box and just wants the whole affair to go away. Again, both of these scenes are just of a little girl crying, but they’re directed in such away that they convey two very different ideas.

The only other thing I want to touch on this week is Rei’s minor flashback. A lot of things we know about Rei at this point are very cryptic, and we don’t have direct answers for what is actually happening. Rei has a flashback of a light haired woman his age kneeling on top of him as he is lying down on the bed. She pulls off his glasses and pulls tightly on the collar of his pajamas which appear to be ripped open. She smiles menacingly as Rei’s face is filled with shock and his hands are clenched. Now, I might be completely wrong about this, but the scene gives the impression Rei was raped by this woman, or at the very lease was being physically abused. If Rei is indeed a victim of domestic violence, that would explain why he moved to the city, why he’s so withdrawn, and why he’s afraid to let people into his head space. It might also explain why he was left behind drunk at the bar the night Akari found him. If this mysterious woman left him completely broken, is she still a constant threat Rei is trying to avoid in the city? Does Akari know about this woman? Can Akari do anything for Rei even if she does know? I’m not sure if I was completely sold on this show or not before this point, but after this 20 second flashback, I’m completely sucked into the mystery of Rei’s previous life.