Don’t miss an episode! You can watch Flip Flappers on Crunchyroll!

Be sure to check out the write-ups for prior episodes!
Episode 1 | Episode 2 | Episode 3 | Episode 4

“ A lot of the scariness comes from how abstract and unknowable the world is.”

Flip Flappers tries its hand at horror and does a pretty great job at it. Lots of creepy and surreal imagery here, with a twisted alternate-reality version of the school. There’s a shot I really like that shows the dimension to be a featureless plane, except for a clock tower and a doorway that seems to lead to nowhere. A lot of the scariness comes from how abstract and unknowable the world is. Exposure to the rain appears to cause bleeding and loss of consciousness, and sections of the hallways and staircases are warped or scribbled out. The ghostly schoolgirls’ motives are never fully explained. It almost has a Lovecraftian horror feeling.

Once again, the show owes much to Studio Pablo’s art direction. This is a very dark episode: the characters and backgrounds are given gloomy blue shades, with occasional spots of blood red colors. The atmosphere is appropriately drab and sinister. There’s some neat attention to detail in the rain droplets snaking down the windows. The character animation is pretty basic, but Cocona and Papika have a couple of fun scared reaction shots. I also like the creepy way the schoolgirls slide across the ground without moving their feet.

The previous episodes borrowed elements from Nausicaä, Alice in Wonderland, and Mad Max. This episode also feels like a pastiche. Some ideas like the time loop, clock tower, and distorted school are taken right out of Oshii’s Beautiful Dreamer, and the scribbled faces of the schoolgirls are reminiscent of the illegals from Dennō Coil. Various horror and yuri tropes are also thrown in the mix. However, originality isn’t an issue when the execution is good, and it’s very good here for the most part.

The big action sequence in the finale seems out of place to me. It kind of diminishes the mood that the rest of the episode had built up. At least there’s some enjoyment to be found in the action and effects animation, and it’s awesome to see Cocona hitting things with a giant magical mallet.

“Through clever blocking and perfect framing, we are nudged towards an emotion of fear by the art.”

Framing is perhaps the most important part of cinematic horror. Of course, horror itself is a very finicky genre, often playing by the Goldilocks effect: reveal too much or too little and it’s not scary, it has to be just right. It also requires a certain degree of familiarity with the subject matter to set a baseline for what is ‘normal’ in order to distinguish what is weird and unsettling. The framing this episode was perfect in both regards, never revealing too much, and allows us to feel the simultaneous sense of ‘normal’ and weird. Mastery of these two aspects pushes the audience off the edge of comfort, free falling into uncanny valley. One example of this is the scene were Cocona is in the hallway alone. 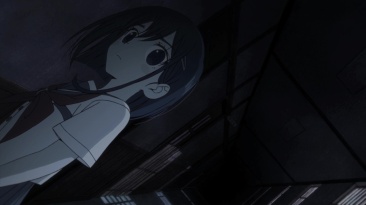 The understanding of how it feels being alone is transposed into the shot by dutch angles. It’s an instant cue that something isn’t right. Horizon lines are normally flat – 180°, seeing them creates the urge to tilt your head to correct it, you fighting against that makes the sight unsettling. The blocking of the shot is also part of the equation. Cocona and the end of the hallway are both placed just off center in opposition to each other, the dual foci charges the shot with tension. Depth along the hallway suggests that there is more to the scene than we are privy to, the answers lying just beyond the darkness. It’s just enough information to let us know something is wrong, but not enough to tell us what – and that’s what’s scary. Through clever blocking and perfect framing, we are nudged towards an emotion of fear by the art. A fright has been Goldilocks’ed into existence.

“The series is better than what was presented here.”

Horror is a genre that’s easy to manufacture a response from a viewer. Put a character in a dark room, slam a few doors, add a ghost child or two and boom and you’ve got yourself a horror movie. Modern horror in the West is even worse when you consider the over saturation of jump scares is preferred over established, creepy tone. It doesn’t take much to scare people, and because of that I find this genre to be the cheapest form of entertainment. That being said, when a creator focuses on establishing that tone and does it well, it can be a fun thrill ride. A cheap thrill ride, but an entertaining one. Thankfully, this episode of Flip Flappers is a fun watch, although my disliking of the horror genre as a whole bogged down the experience. 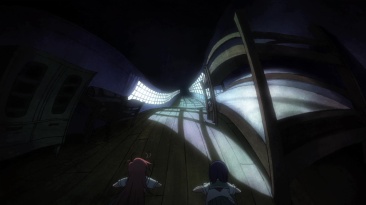 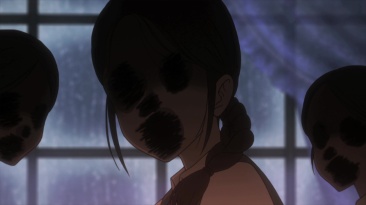 There’s a lot of great imagery in this episode. Hallways warp and bend in the darkness. Hand prints appear on the glass as Cocona walks by. Flashes of lightning hit the water droplets on the glass window, and the sight is downright beautiful. The episode’s final battle in the clock tower is gorgeous. The ghost children are really fun to watch since they don’t walk, but levitate while keeping their limbs unnaturally still. When they do move, it’s very jarring movements that tell the viewer that maybe the child with the blurred face twitching like a glitched video game shouldn’t be trusted.

Despite all this, I think this has been my least favorite episode so far. While it keeps up the high quality of the animation, it felt like a generic Halloween episode. Once again, Yayaka shows up trying to jam a plot and conflict into this series when it really doesn’t need either of those things. While I appreciate not having jump scares and dropping Kurbirck references, I feel like the series is better than what was presented here.

What’s immediately striking about this week’s Flip Flappers is its horror-yuri themes. Instead of the more conventional ghouls and ghosts we usually associate with being spooked this episode uses faceless schoolgirls in a dark, enclosed boarding school that harkens back to the beginnings of yuri manga, and by this setup that we can truly start to examine the yuri undertones of this series.

It’s easy to tell the strong Dezaki-school direction from the layouts as soon as the girls warp to Pure Illusion. Particularly, it begs comparison to Kunihiko Ikuhara’s recent opus YuriKuma Arashi, which uses similar shades and symbols to characterize its main cast as being homosexual. It’s worth making a comparison of these two shows not only because of their similarities, but because of how they handle some elements differently from each other and what that says about their respective themes.

Both YuriKuma Arashi and Flip Flappers episode 5 characterize their settings with ‘Class S’ yuri tropes, one of the oldest and most well-known styles of the genre. Class S yuri manga are typically set at a high-class, all-girls school and frequently feature relationships between innocent underclassmen and the upperclassmen they look up to. These stories tend to have a more conservative approach to their romance and perpetuate a misconception that love between girls is only a side-effect of adolescence and circumstance that is doomed to end after graduation.

Ikuhara and Oshiyama seem to both add elements of horror in order to criticize the rigidness of these works which have become embedded in Japan’s culture. Consider how, in Flip Flappers, the girls are trapped in this illusion of repetitive superficiality, and YuriKuma presents its horror as a representation of social intolerance for lesbian relationships that break these norms.

The key difference between these pieces lay in their central symbol, though, the lily. Yuri is the Japanese word for lily, and the flower has been associated with lesbian romances for as long as these Class S stories have been written. YuriKuma uses the lily as a positive symbol anyways, a vision of true love that still blossoms in the stagnancy of conservative storytelling, but Flip Flappers makes no such effort, and while the girls do seem attracted to each other their relationship is not developed at all in the episode. I believe this is because, as a creator, Oshiyama is not committed to representing his main characters as actual lesbians, at least not at the moment. Will he change his mind, or will he just leave it ambiguous so to not displease fans? We’ll have to watch more to find out.