I want to be obsessed over

“This week we walk with Moca through the valley of the shadow of heartbreak.”

At least Hanabi’s experiment in being Akane came to a crushing and humiliating failure this week. For all of Hanabi’s desperate pretending, she ends up being played by the douchebag she intended to manipulate. She’s no match for a true student of Akane’s facile school of romantic conquest. She still has a heart–battered and broken, but intact.

In truth, Akane’s leftovers end up doing Hanabi a favor. When the chips were down, her belief in love, even the empty, unfulfilling, unrequited kind, saves her from throwing away what little self-respect she has left. Hanabi may have finally turned a corner, and since we’re getting into the waning half of the season, I suppose the time is now plot-thirty. But enough about Hanabi, let’s talk about the real MVP of this week’s episode, Moca.

The show takes great pain shere to draw parallels between Hanabi and Moca, but in doing so it reveals more about their differences than their similarities. They both carry the burden of unrequited love in their hearts, they’re both romantics, and they both love men who care about them…just not in the way they want. But unlike Hanabi, who futilely seeks to become the kind of woman her Onii-chan wants, Moca wants to will Mugi into loving her as she is or at least as she wants herself to be seen. That dichotomy between Moca’s interior and exterior lives forces her to face her truth. Moca has fallen into a kind of maddening love, where every waking moment you drown in thoughts of that special person. Daytime fantasies of romance give way to dreams of longing. The cycle to repeats again and again until it colors your every action. That kind of love seeps into your mind until it overpowers your judgement. The only antidote for this most bittersweet of poisons is a reckoning. This week we walk with Moca through the valley of the shadow of heartbreak.

What makes Moca genuinely fascinating isn’t her comparatively keen self-awareness, but the fact that she, unlike anyone else in the cast, has the strength to emerge from fictional romance she inhabits. But she does so only after her temptation-in-the-wilderness moment. In her moment, Moca learns the hard truth of all desperate hearts: no matter how deeply you love someone, the pain of them not loving you back will eventually shatter your heart. Times like those can be painful, but as the heart breaks so too do the scales fall from one’s eyes. When faced with the choice, Moca chooses her self-worth over her self-made illusion. Hanabi could stand to learn a thing or two from her.

Could Mugi have done the same if Akane decided to use him to fulfill her desires? I’d be willing to bet against it. Mugi, at least, manages to stop himself from using someone he actually cares about. The fact that he’s willing to go the distance with Hanabi but not Moca shows he can’t get past seeing her as the ornamental princess she pretends to be. It’s also another sign that Mugi may have feelings for Hanabi that go beyond the limits of their arrangement. Still, he only comes out looking like a tarnished prince in this episode because the other guy (Akane’s boy toy) comes off as a complete scumball. Of our pair of fake young lovers, Mugi has faced relatively few challenges to his love-induced delusions. Akane looms large in the subtext of this episode, even while off-frame. I suspect we’ll soon see if Mugi can have an ounce of Moca’s courage as he faces his own truth.

I feel like the prior sucralose portrayal of Noriko has hindered my ability for me to take her drama seriously. She very clearly cares for Mugi, at least, that’s what Scum’s Wish episode seven wants you to believe, but I remain unconvinced. Logically, the show has stated it’s intention with her character, and factually, there is no debate as to her motivations. But where I get hung up is with how overtly insincere the natural advancement of her arc seems to be. When compared to our lead, Hanabi, Noriko’s character progression feels very abstract and alienating. At all times, I know and can emotionally relate to the twists and turns Hanabi takes to get to her end goal – which is more than I can say for Noriko. 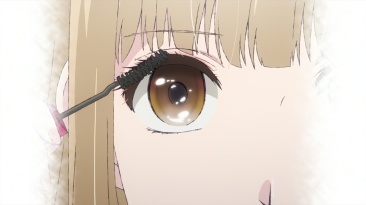 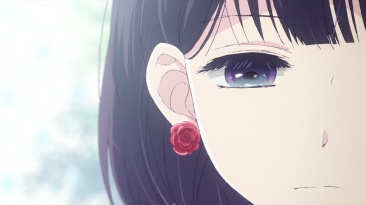 It seems as though this episode featured a greater variance in color than other episodes. The pallet of Scum’s Wish can at times be rather mellow and warm, settling with a lot of burnt sunsets and washed out summer days. There are the dark and grungy greys and shades of black, but Noriko’s appearance introduces pink lace and vibrant reds into the mix which shake up the status quo.

Episodes six and seven have left me fairly lukewarm on the series. Slowly but surely, I am feeling less mentally engaged with character motivations and more exasperated with how they are treating one another. Not that I expect everything to be sunshine and daisies, but it feels like anything that is negative in this show is sure to happen. Characters are sure to make the worst choice for the sake of  ‘raising the stakes’ of the narrative. This feels somewhat lazy. It’s almost as if the plot of Scum’s Wish is a flow chart with the same lyrics of Komm Süsser Tod: “Does it come tumbling down? → Keep tumbling down.”

If you go to sleep holding hands

you’ll both have the same dream

It’s the Moca episode we didn’t even know we all wanted!  This week, the audience gets to view most of the episode from Moca’s point of view, a perspective which makes her exponentially more interesting.  Scum’s Wish has already revealed that Moca is more than the loud, obnoxious, cock-blocking childhood friend archetype, but this week we learned just how much more.

One of the chief concerns of this episode is to draw parallels between Moca and Hanabi.  This exercise is supposed to be a bit surprising, or at least disquieting, because Moca has been portrayed heretofore as a very “pure” sort of character.  However, since the show has already tried to execute a similarly unexpected comparison between Akane and Hanabi, I feel that demonstrating that Moca and Hanabi are actually similar loses some of the effectiveness it could have had.  At this point in the show’s run, it’s fairly clear that putting all of these characters on equal footing, with none being able to claim moral superiority, is one of Scum’s Wish‘s key goals.

That being said, I still find Moca’s arc quite intriguing, both as another lens from which to view Hana’s arc through and also in its own right.  All things considered, it’s really quite sad.  She’s been sustaining herself on a dream that, deep down, she’s known to be false.  It seems that she has known this for a very long time but been unwilling to admit it.  Seeing Moca accept that her fantasy will never be tugs at my heart strings.  Her expressions are so…defeated.  But, ultimately she is willing to settle for a physically intimate encounter with Mugi.  Moca wanted love but will settle for sex; Hanabi just wanted sex but discovered love.  Sad ironies abound. 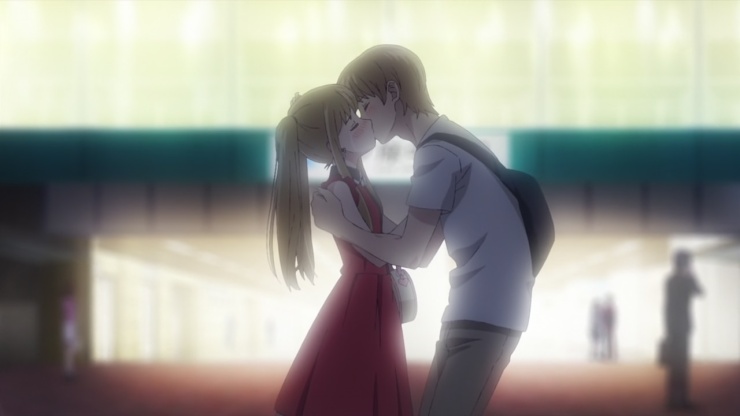 While the interpersonal drama and character progression are solid, there are some things about this episode that bug me.  There is a lot about the depiction and fan reaction to “pure” female characters versus “impure” ones that, well, generally annoys the living hell out of me.  Treating someone’s virginity as a sign of their value as a character or placing characters who have not partaken in sex above other ones who have speaks to a view of sexuality I personally find troubling.  Even though Moca did fool around with Mugi, it still feels like the show is trying to inoculate her against true impurity by having Mugi pull back from going all the way in order to protect their relationship.  In my opinion, “protect their relationship” is code for not shattering the way Mugi (and the audience) sees Moca, i.e. the vision of a pure maiden unsullied by sex.  This scene burns through some of the goodwill I have for Scum’s Wish, a series that seemed like it was on the path to having sex positive messages.

I don’t really have space to delve more deeply into this topic, so I’ll just say: sex is OK, y’all.  It really is.