I had no idea being the object of someone’s desires was so heavy.

“I was struck by Ecchan’s confession like a bird crashing into a windshield.” 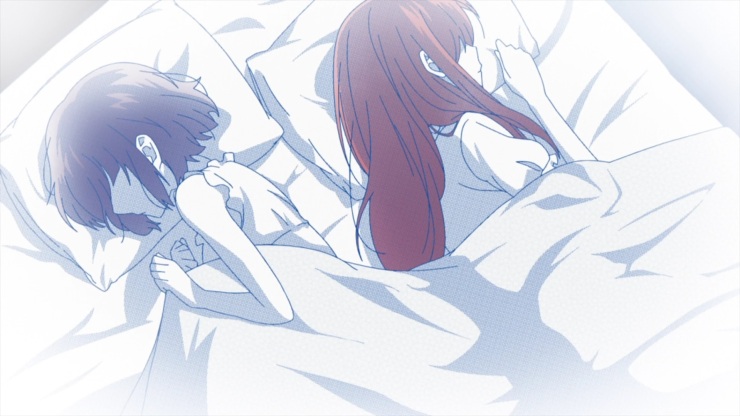 This episode sheds more light on the emotional baggage of the cast and Hanabi finally begins to understand how naive her assumptions about the intentions of the people in her orbit really are. Up until this point, she’s assumed that everyone sees love and attraction in the same way she does. But her encounters with Ecchan, Mugi and Akane in this episode begin to challenge her assumptions.

I was struck by Ecchan’s confession like a bird crashing into a windshield. She goes all in, betting big on half-truths in the way that only someone completely absorbed in their own desire can. The dawning horror that washes over her as she makes her move and begins to understand her mistake feels uncomfortable to watch not only for its non-consensual nature, but also because of the heartbreak that Hanabi’s shock inflicts upon both of them. The two of them move on from the encounter forever changed, and it remains to be seen how, or even if, their friendship can survive it. While I generally enjoyed the confession scene, it ends up being one of the worst-executed parts of the series thus far. There are a couple of text-framed shots that feel a bit unnecessary for a show so adept at conveying emotions with layered visuals. It honestly feels jarring and takes me out of the intended discomfort of the moment.

The shock of knowing Ecchan’s true feelings, proves too much for Hanabi to handle. Her emotional investment in her relationship with Ecchan helps Hanabi realize just how much it can hurt being on the other side of unrequited love. But even as she laments that weight, she writes off Moca’s plea for her not to take Mugi away. The moment comes off as being played for laughs but I can’t help but feel sad over the not-so-subtle desperation in Moca’s voice. Scenes like the one with Moca remind me that Hanabi is the most narcissistic character in the show…for the moment at least.

Scum’s Wish goes out of its way to subvert standard romance tropes and the continuing development of Hanabi and Mugi’s relationship in this episode serves as a perfect example of this. An intimate scene between two fake lovers like the one in this episode might lead you to think that real feelings will begin to develop between the two leads. Instead, by the end of the episode it’s clear that Mugi not only isn’t even considering the possibility, but also actively wants to guard against it because of his past experiences. We now know just how differently Hanabi and Mugi approach this fake relationship. Hanabi sees love as an absolute concept, or at least she thinks she does. As a result, she struggles with the paradox of wanting a real emotional connection while also believing a fake relationship is a viable solution to unrequited love. Mugi, on the other hand, has completely disassociated the carnal and emotional aspects of love and believes that he can continue to invest himself sexually in a relationship with Hanabi while carrying a torch for Akane.

One of the more interesting challenges for the show will be keeping the fake romance aspect plausible and interesting while not cleaving to well-worn romance tropes. And as for Akane, the end of this episode portends a deeper look into her motivations and all signs point to her image of as a wholesome teacher being yet another illusion, in a show where everyone isn’t what they seem. You’re the one who made me realize…

“What we are seeing is characterization and storytelling through visuals: the ultimate form of cinema.”

The first several minutes of Scum’s Wish episode 3 are a brilliant example of visual storytelling. The cinematic competency is so phenomenal at sustaining its mood and tone that the images envelop the viewer. When we are watching Scum’s Wish, we are in Scum’s Wish. I went into detail in my writeup of the first episode explaining the show’s use of panels. I strongly suggest you read that in addition for a more complete picture of what is going on onscreen.

“Love will make you blind,” are the words that Hanabi says at the end of this week’s episode. I mentioned before how each panel is a perspective, and that the narrow vision of the panels visually reflects the ‘blindness’ that love brings. It’s a central theme in Scum’s Wish, that love clouds (if not outright blocks) our perception – we ignore important details with eyes only  focused on the things we want. But these panels are not used for point of view shots, i.e. they are not the actual vision of the character; rather they manifest the featured character’s head space, or their mental vision.

A good example of this is the bedroom scene between Ecchan and Hana. After a kiss, Ecchan breaks down into tears, aware that she is about to be rejected. The confession begins with my favorite shots in all cinema, the reflection in the eye. It stacks the focus of Ecchan and Hanabi’s reaction into one location, literally layering the emotions so they inhabit the same physical space. The second frame focuses on the vertical movement of a single tear in the middle third. The perspective is at the wrong angle to be Hana’s, who would be below the tear watching it fall (established in the first frame). Looking up at the tear would also cause a psychological sense of awe as we tend to be amazed with things bigger than us, and bigger things usually require we look up. Conversely, looking down inspires an opposite corresponding effect, but here the shot maintains eye level, a neutral position allowing us to see things as they are. As Hana starts to understand Ecchan’s feelings, the tear leaves the panel in the second frame, landing on her check – the motion from one emotional space (the panel) transfers to the full ‘big’ picture. 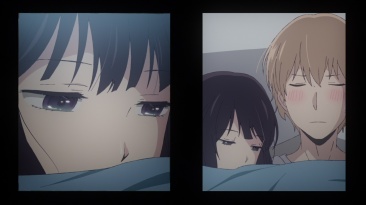 At times panels are doubled, like in the above scene with Mugi. Motions are mirrored as Hana lays on his shoulder, literally doubled to sync up perfectly. But each panel displays a differing perspective, one framing him and her, the other just her. Despite being in such proximity physically, mentally they are in other places – there’s no connection. So although they are both experiencing each others’ physical actions, they don’t mentally connect.

The final scene of the episode uses this distance perfectly to place Mingawa and Hanabi at odds with one another. Visual cues like an overlapping portion of the background  demonstrate that the two women are mere feet away physically – but we are completely concerned with their mental space. They block one another out despite exchanging a look. What we are seeing is characterization and storytelling through visuals: the ultimate form of cinema.

“ There doesn’t seem, at this point, to be any way for all of the characters in this to come out happy in the end…”

This show is rough on me, emotionally. A couple bits hit, perhaps, a lot closer to home than I expected out of this show. To keep it succinct, I have definitely been in a diner past midnight while both sad and embarrassed, on top of a multitude of other things going on this week. Really, I’m kind of delighted by the pointed jabs this show seems to make. 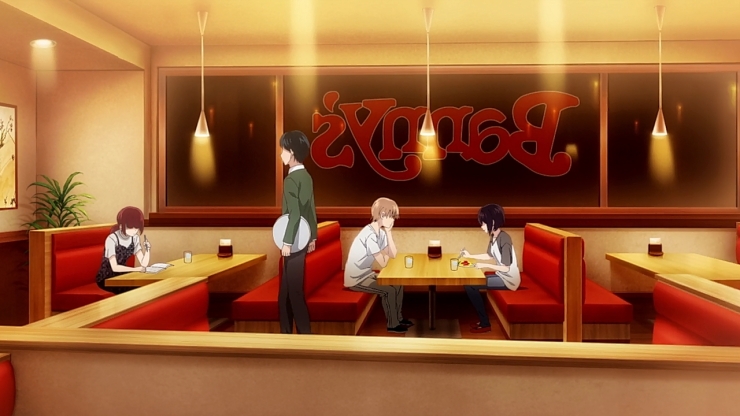 First, Ebato (“Ecchan”). I watched episode 2 and 3 back-to-back, or else I’d have been screaming about the ending of 2 for a solid week. There doesn’t seem, at this point, to be any way for all of the characters in this to come out happy in the end, but this feels intensely real rather than a cheap grab at your heartstrings. It’s not prisons of their own making, it’s inescapable cages made of their emotional reactions to things they have no control over. I need further development on Ecchan, like, yesterday. It was physically painful to watch someone pour their heart out, knowing with certainty that they won’t have their feelings reciprocated, trying desperately to settle for something close. It hurts! I want more time with her. 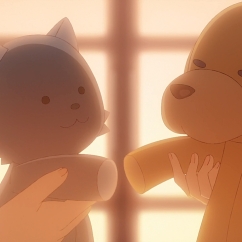 Second, I’m glad that Hanabi is central, but I am also happy that we are getting a good amount of exploration of Mugi’s character. I was deeply afraid that he would just kind of be a wall that Hanabi (and the viewer) had to struggle to interpret intent and feelings from, so I’m thrilled that we’re getting more on his perspective. Hanabi’s motivations aren’t simple, not by a long shot, but Mugi somehow feels like he’s a lot more conflicted and confused about what he wants. I could be wrong, and it could be the reverse. The two of them both have a simple goal when it comes to their romantic interests, interests that initially seemed unattainable for the same reasons. The people they desired were interested in each other, not Mugi or Hana. Akane, the former tutor and current teacher that Mugi longed for, seems to be unattainable for very different reasons now. Though she has no issue with dating a former student, (it seems she just never saw Mugi that way) Hana might be starting to. They did explicitly say they wouldn’t fall in love and, truth be told, I expected Mugi to be the one to break that. Instead, he seems to be in a much deeper hole than Hana is. Hana at least seems willing to try to move on from her brother, to try and care for Mugi, but he’s not at that point yet. He might never be.

Hana has what comes closest to a complete perspective. She’s seen a side of Akane that Mugi can’t (or won’t), she knows her best friend’s desires, she sees what Kanai (the “big brother” she’s cast her affections with) desires in Akane, and of course, she knows what she wants. Every other character is missing one of these pieces (or they just aren’t relevant to them, in Ecchan’s case). There might be a path to everyone’s happiness, but that isn’t realistic. It doesn’t seem like the kind of show Scum’s Wish wants to be.