There are many misconceptions among Western fans about Akiyuki Shinbo and his role at Shaft. Most mainstream anime-watchers venerate him as though he is the sole director at the studio and English sources frequently support that assertion. Indeed, Shinbo is credited as the director for almost all Shaft series that have pages on Wikipedia, and even ANN rarely references anyone else in Shaft-related articles.

While the notion of Shinbo being the only director at Shaft is plainly wrong, I can see why such a myth is perpetuated. In most series produced by the studio he is credited as director (監督) or chief director (総監督), and his style has had a massive influence overall. People tend to interpret this as meaning he is the primary director, having more creative input than anyone else, when in actuality he is simply following the role of studio leader that has helped Shaft stay so consistently weird over the years.

Looking back at the history of the company, Shinbo first joined Shaft during a transitionary period after the previous chief director, Wakao Hiroshi, retired. Producer Kubota Mitsutoshi was attempting to find a way to revitalize the studio and eventually decided to recruit a group of new staff members with distinct visual styles. Chief among them was Akiyuki Shinbo, who was given the role of mentor for the rest of the staff. He, along with his right hand man Shin Oonuma, led production on all Shaft series for years.

However, as time went on Shinbo’s involvement waned as younger staff members, many of whom had already contributed greatly to the success of the studio, came to the forefront of production. I’d like to highlight some of these hidden artists and discuss their respective positions and impact on the studio. 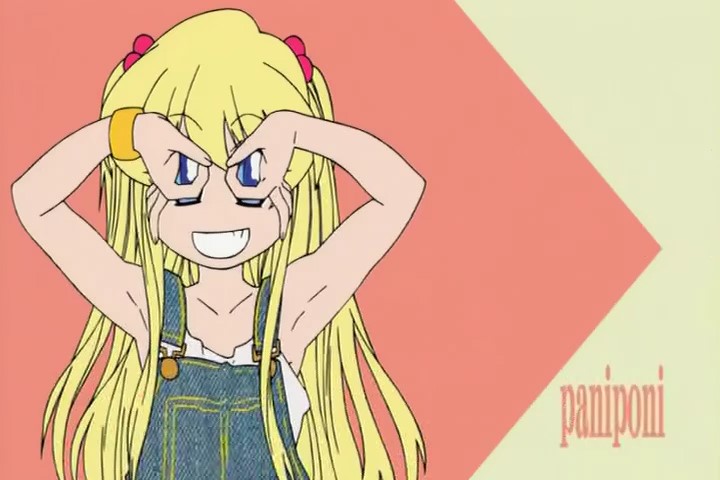 Oishi is often referenced as the third pillar in the early Shaft’s Shinbo-Oonuma-Oishi triumvirate, though he didn’t get much attention from Western fans until he directed the adaptation of Nisio Isin’s massively popular light novel Bakemonogatari in 2009. He is one of the most experimental visual directors at the studio, and many of his techniques have gone on to define what is widely regarded as ‘Shaft-style’ today.

While he inherited a significant amount of his early mannerisms from his mentor Shinbo, what differentiates him from his peers are his skills as a designer. He focuses his efforts on areas not often considered important during anime production, such as the minute details of color choice and typography. He excels at OP direction, taking advantage of the relative lack of restraints associated with them. This freedom allows him to apply his talents to fulfill the ultimate purpose of an OP – to advertise and credit.

One only needs to watch Pani Poni Dash’s intros to see his design principles applied. Each frame is eye catching and unique, the colors pop, and all of the credits are stylized and arranged in a way that adds positively to the image. Oishi disregards the context of the series, replacing it with absurdist visual gags and objectified characters in order to condense the slapstick otaku comedy of Pani Poni Dash into one-and-a-half minute long animated shorts that are just as fun and memorable as the show itself.

What makes Oishi even more notable is how he applies the techniques he uses for OPs into episodes themselves. His episodes tend to be the most imaginative and well produced at Shaft, relying less on Shinbo-style gimmicks than usual. Instead, Oishi brings his own gimmicks to the table, with an increased number of stylized cuts, elaborate typography and a love of integrated photography.

Oishi has been groomed to be the next leader at Shaft since at least 2008, when he was granted greater influence on the production of Hidamari Sketch x365. This cumulated into his directorial debut in Bakemonogatari, but was unfortunately halted as he struggled to finish its ambitious sequel, Kizumonogatari for over five years. Now that the Kizu films are finally getting released, I trust that he will be a very important figure at Shaft in the years to come.

One of the most successful modern directors at Shaft, Yukihiro Miyamoto has worked on the majority of the shows they’ve produced since he joined the team in 2006. He most frequently directs comedy-centric shows such as Sayonara Zetsubou Sensei, Arakawa Under the Bridge, and Maria†Holic, but he’s best known as the series director for Puella Magi Madoka Magica.

Miyamoto’s style is more methodical and down to earth than both Oishi’s and Shinbo’s, with a greater focus on visual symmetry, flat colors, and repetition. This made him a great fit for the style of comedy he so frequently adapts, often starting with a simple gag and building it up over the course of the episode. He also tend to stick closer to the source material in his adaptations than other directors at Shaft. This can be seen as he gained more control over the Sayonara Zetsubou Sensei series, which grows increasingly more faithful to the manga with each season.

Miyamoto is known for meddling in the avant garde. Even early in his career he did episode direction on some of the weirdest episodes of Sayonara Zetusbou Sensei and later went on to direct its sequel, one of the most bizarre and deranged series Shaft has ever made. His most popular series, Madoka, garnered worldwide praise for its surreal spectacle.

The reason so many styles are represented in his work is because, like any good director, Miyamoto has excellent contacts, frequently drawing in staff from outside of the studio and giving opportunities to new blood through storyboard and episode direction roles. In fact, he was the one who originally introduced the animation troupe Gekidan Inu Curry to Shaft, having met them while attending classes at Yoyogi Animation Gakuin. They first collaborated for the Goku Sayonara Zetsubou Sensei‘s OPs and continued working together into Madoka, where Inu Curry designed the witch encounters.

Considering his ability to foster talent and the frequency of series he has directed since 2008, Miyamoto is an excellent representative of modern Shaft. His influence has even started to propagate outside of the studio as staff members he’s mentored, such as Shinichi Omata, leave to start their own legacies. In this way Miyamoto could already be acting as a successor to Shinbo.

While early Shaft was defined by Shinbo and Oonuma who were succeeded by Oishi and Miyamoto, current Shaft relies mostly on two directors to make their seasonal series, and Tomoyuki Itamura is one of them.

Itamura is the director that was selected to replace Oishi on the Monogatari series while he was working on Kizumonogatari, but most of his stylistic inheritance actually comes from Miyamoto. This is because Itamura mostly worked on series that were led by Miyamoto, like Zetsubou Sensei, Arakawa, and Denpa Onna prior to taking the helm on Monogatari.

That’s not to say that Oishi didn’t have an influence at all on Itamura, though, since he did contribute to Hidamari Sketch x365 and Bakemonogatari, but considering how inactive Oishi was post-Bake it’s natural that Itamura takes more after Miyamoto. This is the primary reason why the seasons of Monogatari that are led by him are less visually dynamic and innovatory than Bake.

That said, Itamura has grown significantly as a director over the course of the past five or so years. Since Tsukimonogatari he has clearly found his own style, reflected in the cutout chapter markers and constantly changing symbolic scenery, and he’s shown further experimentation in the recent Owarimonogatari.

It will be interesting to see where Itamura goes in the future. He hasn’t had much chance to have control over a non-Monogatari project outside of his debut on Negima’s Ala Alba OVA, and in view of his recent development as an artist he will be one to look out for after Monogatari is finished.

Naoyuki Tatsuwa is the other prominent figure currently directing at Shaft alongside Itamura. He was a key animator during their early years, contributing greatly to the production of Pani Poni Dash and Negima, but it wasn’t until Zetsubou Sensei that he started doing episode direction and story boarding. From there he followed in Miyamoto’s footsteps, working as assistant director on many of his projects.

His first major project as a director came with 2010’s Soredemo Machi wa Mawatte Iru, a series that is quite different from the Shaft standard. It is far more visually grounded, without the abstraction or stylization that most fans of the studio expect. Instead the show supports itself by taking advantage of Shaft’s animation staff, who render the details of the world and characters beautifully. The result is a lively and satisfying slice-of-life comedy, the kind of show that Tatsuwa is particularly good at creating.

He directed the Katte ni Kaizou OVA in the next year, which, being an adaptation of another Koji Kumeta property, takes most of its inspiration from Miyamoto’s Zetsubou Sensei. It also happens to be the most Shaft-like anime Tatsuwa has made, considering his inclination towards more realistic direction.

These days he is best known for adapting Nisekoi, which falters on the inclusion of unnecessary Shaft tricks where they weren’t needed. Head tilts and occasionally unorthodox framing  are forced into places where they add nothing, almost as if Naoyuki has fill a mandated quota, leading to disappointingly amateurish direction overall.

Fortunately his most recent series, Kofuku Graffiti, is a return to form. By casting away the form of his peers and instead focusing on developing a lighthearted atmosphere centered around making and eating food, Tatsuwa has revealed himself as an excellent slice-of-life director with an incredible attention to detail.

Seemingly the most out of place on this list, Tatsuwa is a unique director for a company like Shaft. His techniques may seem mundane compared to his peers, but it can be refreshing to break away from studio conventions every now and then. 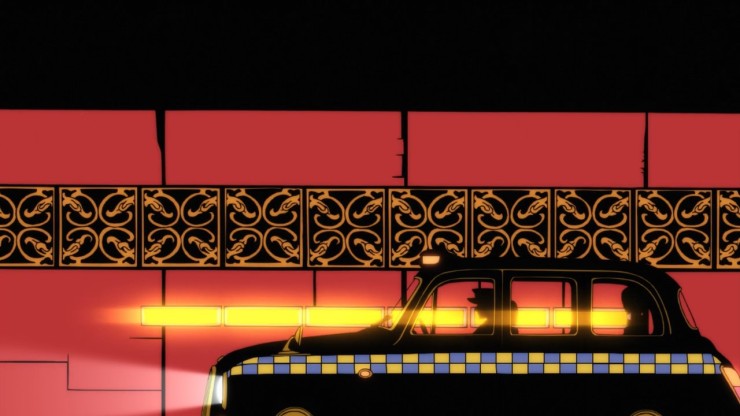 Finally, the last staff member I’d like to bring to your attention is Nobuyuki Takeuchi, someone who was involved since the early days of Tsukuyomi Moon Phase and has worked as both a designer and visual director for a great number of Shaft’s series since.

Takeuchi, initially a key animator, was one of many who worked on Revolutionary Girl Utena under director Kunihiko Ikuhara and was greatly affected by its unique artistic flair. He brought some of the visual techniques used in Utena to Shaft, including silhouettes and complex architectures. This can be clearly seen in the few episodes that he made storyboards for, such as the first episode of Maria†Holic and the first five episodes of Bakemonogatari.

Takeuchi is still currently active, taking the role of production designer in recent Monogatari seasons, but I would personally love to see him direct a show on his own.

Shaft is in its 40th year at the time of this writing. This year sees the release of the long awaited Kizumonogatari, a promised series of Prism Nana OVAs meant to foster young animators, and the prospect of one of their adaptations airing on NHK public television. The studio will surely undergo massive changes in the near future. While I doubt Shinbo will leave his position as head of the studio, it’s clear that there is a shift being made towards allowing new talents to express themselves, and I look forward to seeing the ways they work to revitalize the studio once again.