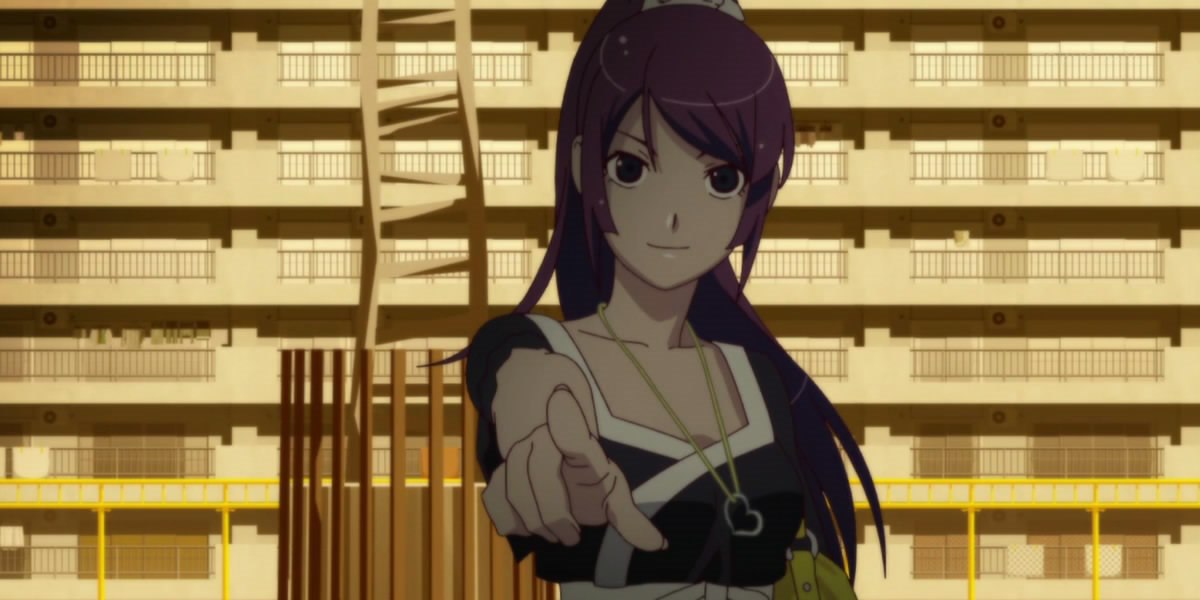 Monogatari loves me, and I love it right back. Yet, until recently, I couldn’t really tell you why I loved it.

I could try, but I couldn’t convey my feelings to my satisfaction. There was always some inexpressible something I couldn’t get across. Certainly, I have never been short of positive things to say about the series. In fact, it’s always been easy to express why I like Monogatari: it’s a layered, ever-twisting tale of non-archetypal and broken characters struggling against the idea that they alone can’t fix their fucked-up-ness. Welcome to my wheelhouse.

But, there’s a bunch of stuff in my wheelhouse that I don’t feel super strongly about, stuff that doesn’t resonate as deeply with me as Monogats. What is it about this thing that grabs me so tightly? The fact that I couldn’t adequately express my Monigatari-related thoughts and feelings was actually a bit troubling because it pointed to me being a failure as a critic. I don’t think the most important thing about criticism and analysis is always having some opinion on stuff; sometimes we just don’t. What’s essential, I believe, is that when a thing makes you feel something, when it hits you right in the heart, then you, the critic, have got to be able to clearly and accurately communicate why it made you feel that way. Ironically, finding media that I felt so good about led me to seriously doubt my ability to evaluate said media.

Then it hit me. I was discussing the series with a friend, when it hit me like a right hook from a Rainy Devil. I had tried to tease apart the series, to break it down and analyze its constituent parts when, for me, none of these individual pieces (or even clusters of these pieces) are what move me. It isn’t “the writing” or “the backgrounds” that elevate Monogatari. Don’t get me wrong, I feel that most of the franchise’s aesthetic and narrative elements stand up well on their own; however, the parts just aren’t quite as great as the single, unified thing that this is Monogats. I had been trying to determine what my favorite ingredient in the recipe was when what I appreciated was all one cocktail, one irreducible unit, something that feels like it came fully formed from the SHAFT braintrust. What I love about Monogats is experiencing Monogats; all of it, all at once.

Immersion, I think, is the correct word. Monogatari offers a distinct blend of both sensory and conceptual elements that I easily become immersed in. Let me see if I can document how this happens…

A lot of people tend to default to describing what the series looks like when describing what makes it stand out. When I think of Monogatari, I immediately recall the sound of it. I can’t think of anything that sounds the way this series does. Let me say here that I’m not talking about the OPs and EDs. Those are mostly fine; some are even good. But, they aren’t immersive; in fact, those more than almost anything else pull me out of my Monogats-induced trance.

No, my aural fixation concerns the somehow simultaneously sparse yet rich OST and the hypnotic voice acting layered over the top of it. The music burrows into and forms a symbiotic relationship with the show’s unique visuals. It always compliments the acting and storytelling, while never trying to make itself the center of attention. Yet, the soundtrack has an undeniably strong and distinct flavor to it. As its tone rises and falls to keep pace with the story, the steady, rhythmic quality of the voice acting serves as a lovely counterbalance. Monogatari is a very talky show, but, in terms of sound design, this works to its advantage. Now, I adore the series’ dialogue and consider it one of the key pieces to the puzzle, but in a very real sense, it doesn’t matter what the characters are saying. OK, that’s overstating things a bit. It’s incredible and hilarious that Senjougahara verbally fences Araragi in so that no matter which way he answers he looks bad, all while making puns that infuriate him. It really is. But, when she does that while sounding like this, with this music …it’s immersive. It’s poetic. Poetic as fuck.

While the sound of Monogatari acts as a sort of pneumonic anchor, the visuals and thematic content envelop my mind’s eye. So much is happening in this thing. A succession of cuts: some introducing new visual motifs, others delving into the surreal. Light sources move around and change color from shot to shot. Ornate, detailed backgrounds, matte world-objects. This town! This town, seemingly abandoned by all human beings except for these attractive characters who are absolutely pulsating with sexual energy. Head tilts. Bewitched and disarmed, my mind embraces these images as they swim around in it freely, as they deeply impress themselves onto my memory.

What makes my relationship with Monogats a long-term, committed one, rather than just a fling, is the intentionality of all these elements. There’s a cohesion to the aesthetic of Monogatari, an about-ness to its sights and sounds. They’re not there just to fill time; they’re all working in service of the story and its messages. The show communicates some of these messages in a straightforward, upfront manner. But, it also whispers many of its more cryptic ones softly into your ear as it sensually slides its fingers down your… Only lying in bed hours later, deep in thought, do you realize. Well, you think you realize, but you’ve gotta go again, just to be sure.

And then, some of the messages, you just might not ever get because, ya know, you’re not Japanese and you don’t have time to go research folklore and customs and language. I’m not going to lie to you and say that I understand everything Monogatari is trying to say or that I can provide plot justification for each and every scene. I can talk about some of it, sure, but not all of it. And, that’s OK. If you ever grow to trust and care about someone, after a while you stop suspecting that they are putting on an act. You stop investigating their claims because the ones you have looked into reveal nothing but that person’s insight. There’s a richness, an implied depth, that emanates from that show. I’m content to mine that depth at my leisure, confident that I will find gold every time.

But, divorced from its sensory conduit, Monogatari’s ample thematic content isn’t…it isn’t Monogatari anymore! At least, it’s not the experience I have fallen in love with. Maybe this is why I don’t give a shit about the books? On paper alone, this thing loses so much of what makes it great. I’d like it sure, but I love my experience of Monogatari. Then again, if any part of it is abstracted from the whole and examined, it will be found wanting. Music and sound need the visual presentation to breathe context into them; the visuals need messages to work toward in order to gain their meaning. All of these pieces, working in concert, entrance me. I’m able to deeply immerse myself in the experience, and it relaxes me in a way that not much else does. In this hectic, frantic part of my adult life, I’m so happy this thing exists whose rhythms calm my soul.

I love you too, Monogats.