Materials translated here were published in the May issue of Animage, 2016. The interview has been translated by Twitter user @Kewl0210  © 2019 Wave Motion Cannon

If you like this sort of anime coverage and want to see more of it, support us on Patreon! 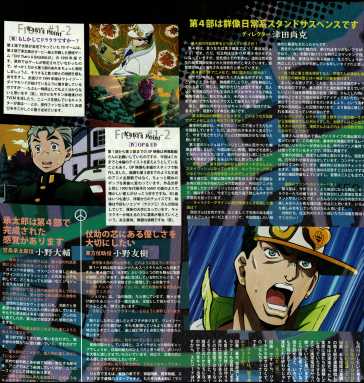 The Fear of a Neighbor being a Heinous Criminal

– The story went from the massive scale of crossing a continent on a journey to Egypt in Part 3 straight to the challenge of Part 4 which is about a mystery in one Japanese suburban town. With such a big difference, Part 4 could potentially come off as dull. So I would think it’s a rather difficult part to work on…

Katou: True. As far as visuals and story expansion goes, there’s an about-face from Part 3 to a much more low-key first impression. But I think in exchange, the portrayal of the characters gets deeper. To put it simply, you get the feeling that they all get up in the morning and go about daily lives.

Katou: You get the impression that Jousuke and the others all eat breakfast normally, go to school, come home, eat dinner, take a bath, and go to sleep (laughs). And the way that abnormal events start entering into that cycle of daily life little by little is completely different from parts 1 to 3. Parts 1 to 3 all took place in these far-off different worlds, but Part 4 takes place in a different world that’s right next to your own. Take for example Angelo, who appears in episodes 1 and 2, he’s an extraordinarily vulgar criminal, but those sorts of stories about vicious criminals might actually be occurring nearby you. I feel like in that way, Part 4 is more of a modern horror than everything up to Part 3 is. It makes me feel like Araki (Hirohiko)-sensei’s tastes are more prevalent here.

– I got the impression you were emphasizing the ‘Bizarre’ part of ‘Bizarre Adventure’. Up to Part 3, I think it’s the nuances of ‘Adventure’ were more pronounced.

Katou: The town of Morioh that serves as the setting of Part 4 feels like a mirror image of our own world. Even in the towns we live in, the possibility exists that our neighbor could be a serial killer. Right now society as a whole is very nervous about things like crime-prevention, right? Part 4 takes place in 1999, but now we have the Internet involved, so in a way maybe Japanese society is getting more eerie. But I think that makes it feel more interesting to look at Part 4 now.

– Those that like horror are sure to get excited by the fear that you don’t know who’s living in newly-developed commuter towns, but I don’t think it’s something you see in magazines aimed at young boys all that much, do you? (laughs).

Katou: Well, I actually thought the same thing when I read part 1 (laughs).

Katou: In Parts 2 and 3 I felt like it was getting kind of typical for a shounen magazine. But in Part 4 when it took the form of a school-life-style story, somewhere along the line, Araki-sensei’s tastes gradually started to show their faces. I think it’s around the latter half of Part 4 where a horror story being told in a shounen magazine was combined with sensei’s unique aesthetic refined through his interest in various movies, manga, and novels in order to become really polished. The first half of Part 4 seemed to still be dragging the shadow of Part 3 with it in places, but somewhere in the middle the story, visuals, and excitement ramped up to a completely different level and combined to drive something incredible. So in that way, Part 4 can seem dull at first glance, I think it’s really excellent overall, and also a part I particularly enjoy.

– Also regarding the character designs, the macho-feel from Part 3 is still there at the beginning of Part 4, but along the way they get refined and become a lot more stylish, don’t they? For this anime, what was your direction for the design?

Katou: For the most part, I left Nishii (Terumi)-san to handle the character designs. But the director, Tsuda (Naokatsu)-kun, and I talked it over with the producers and decided on the direction of just scooping up the style from the middle to the end of the source material where it really hit its stride. The beginning of Part 4 was really  dragging the shadow of Part 3 with it, so we felt that sticking with the same style from the first half all the way through would be a bit of a stretch. On the other hand, if we started from the beginning making it look like the Part 4 manga did in the end, we really wouldn’t be able to depict the sense of intimidation when Koichi first meets Joutarou. In the source material, right around when Rohan is introduced, the art style suddenly changes dramatically. Starting there is what we based our style on.

– On the staging, direction aspect, parts 1-3 were all based purely on the source material. Were you following that route once again this time?

Katou: Yes, our basis is of course the source material. However, we had an order for a chance of tastes from Part 3, and we felt like despite our efforts it was ending up the same as Part 3, so… as you might have noticed if you saw any of the on-air footage, the sky isn’t blue.

Katou: That’s one aspect that’s different from Part 3. We decided on some expressions that you don’t see in other works too often (laughs). Basically, we made the sky yellowish in the afternoon. And the sea wasn’t just blue, it looked green like it had bath agents in it along with a host of other colors.

– The colors were quite certainly unique despite it being a Japanese setting.

Katou: We used Araki-sensei’s color illustrations as reference for how we did our coloring. Like the splash pages and posters he drew for Part 4. In Part 3, when things were starting to look too realistic, we would go back and make them more manga-like, graphical direction. The foundation of Tsuda-kun’s thinking was that from Part 4 onwards, even the look of the Jojo source material starts to change, going into more of a graphic art direction. So we all went on that route and we ended up making the scenes have the colors they did.

All characters and all Stands appear!

– In Part 3, even while using the manga as your foundation, you fleshed it out by adding scenes with Polnaref and Iggy. From watching episodes 1 and 2 of this series, I get the impression that the relationship between Jousuke and Koichi were emphasized a bit, were they?

Katou: In Part 4, Jousuke and Koichi, along with a character that appears after that, Okuyasu— We call them the “three stooges” among ourselves (laughs)— their friendship, or rather their group cohesion, was something we felt was really important to get right. When you read Part 4, you think of your own high school days, don’t you? Vivid memories of stupid things like stopping somewhere for no reason on your way home from school with your friends and chew the fat come to mind. So having those three having dialogue together and just talk about stuff was something we wanted to add on to what was in the source material.

Katou: In Part 4, Jousuke and Koichi, along with a character that appears after that, Okuyasu— We call them the “three stooges” among ourselves (laughs)— their friendship, or rather their group cohesion, was something we felt was really important to get right. When you read Part 4, you think of your own high school days, don’t you? Vivid memories of stupid things like stopping somewhere for no reason on your way home from school with your friends and chew the fat come to mind. So having those three having dialogue together and just talk about stuff was something we wanted to emphasize more than what was in the source material.

– Speaking of which, how conscious were you of the setting of the story being 1999?

Katou: We were conscious of it to a degree, but when Part 4 started publication, 1999 was the near future. So it’s a little bit different from the 1999 we experienced. Like I think an office worker would definitely use a cell phone by that point, but in the beginning of Part 4, no one used a cell phone. If you probe into that too much, it becomes a hindrance to the story in a few ways… Like if Jotarou had a cell phone, the whole story kinda falls apart (laughs).

– Are you going to present all the Stands, like you did in Part 3?

Katou: On a fundamental level, yes, we’ll have them all. And we’ll have all the characters, too, but we’re changing how we’re making them compared to Part 3, so while we’ll be being loyal to the source material, I don’t think we’ll be quite as loyal to it as we were in Part 3. Of what we’ve done before, I’d say it will be more like Parts 1 to 2 where it’s a bit compressed. So all of the characters in the Part will appear. So without revealing any specific episode, I can at least say that the story won’t be presented exactly like it was with Part 3. The part before the opening theme in episode 1 is symbolic of that.

– So in a way, you’re going at a faster pace than you were with Part 3, is that a good way to put it?

Katou: Yes, that’s right. In episode 2, We went all the way to the point where Angelo receives punishment. In Part 3, we had an irregular structure where we had an act 3 where the next enemy appears to draw get the audience excited for the next episode. But in Part 4, we’ve been having writing meetings to try and utilize the 30-minute TV episode format to allow the audience to enjoy one complete story in each episode. As opposed to the more serial, road-movie style of Part 3, this time, including with how we’re doing the pacing, we’re trying to have it develop like a suspenseful overseas drama.

– I’m looking forward to seeing how the story develops. So to finish off, is there any message you’d like to give the fans?

Katou: I think both people who have and have not read the source material may be watching, but the source material undoubtedly has some incredible strengths, so our first priority is to convey what made that so good into animation. Then on top of that, by adding the things like moving images and sound that are part the medium of anime, we hope to create something that even those that already know the source material will enjoy. Be sure not to miss Jojo’s Bizarre Adventure: Diamond is Unbreakable.

If you like this sort of anime coverage and want to see more of it, support us on Patreon!