This is a guest post by Thehoennhippo (@thehoennhippo), who also goes by the (pen) name “Alex Jackson.” Alex writes about manga and webcomics at Fighting for Nippon and his personal blog Hippo Talks About Stuff. 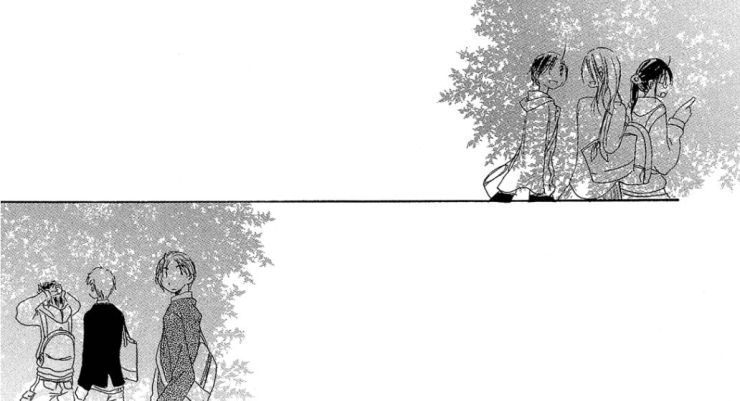 You find yourself in a situation where you are absolutely alone in the world because of your experiences. No one else ever has, or will experience what you are experiencing. On top of that, only one person knows what you are going through, and even he cannot truly understand your feelings because he’s not you. Sounds pretty lonely, no? Hana wa Nisemono is a manga that deals with this idea, an idea that has fascinated me for a long time. 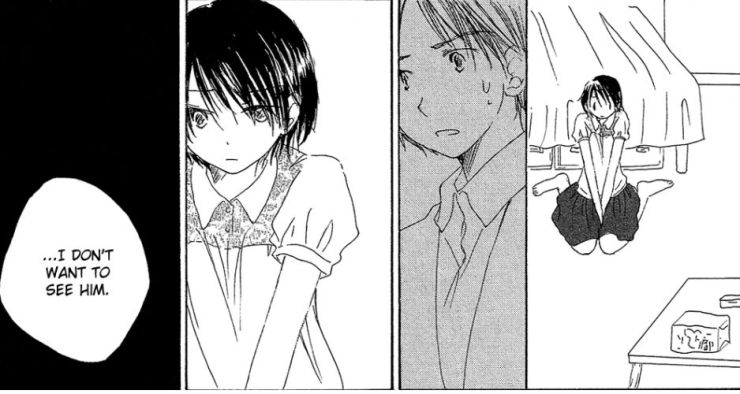 Hana wa Nisemono follows two college students named Ayumu and Mori, who are a gay couple. On new years, Ayumu prays at the shine for luck in their relationship, and god, not understanding gay people, turns Ayumu into a girl. What’s more, the whole universe has been changed so that Ayumu was always a girl, and Mori is the only person who remembers Ayumu as a boy. Within its one volume run, Hana wa Nisemono illuminates the struggles of the couple’s relationship, as well as the complex and difficult to vocalize experiences the two are going through. These are some pretty challenging ideas to tackle, but for only 200 pages it does an impressive job—at least at first.

Both Ayumu and Mori make for very interesting perspectives. Ayumu has to deal with being placed in a life that isn’t his own, and Mori deals with sorting out his own feelings. There is certainly an imbalance of challenge there, one that adds tension in their relationship. It’s a very important relationship for both of them though, and because of the world’s rewrite, Ayumu needs Mori more than ever. 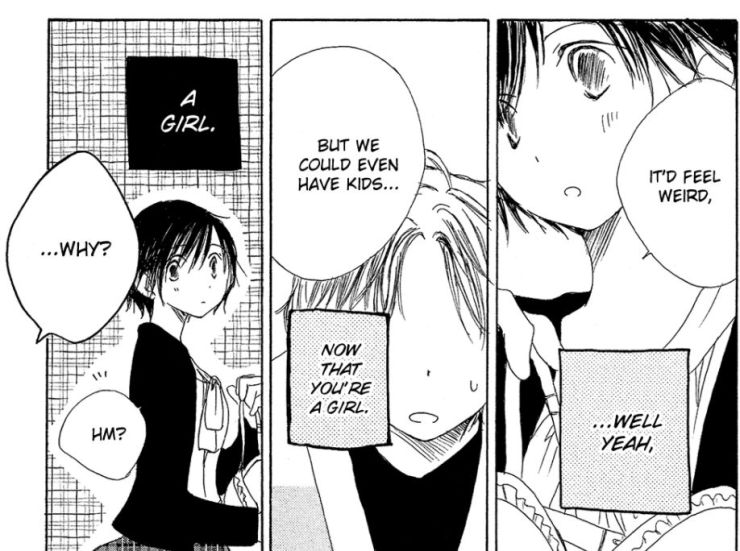 Ayumu’s transformation into a girl naturally brings a lot of new conversations to the couple. They could get married and even have kids, however strange for them that may be. But Mori is gay, so how does Ayumu’s transformation change things for him? He doesn’t know. Nobody knew they were dating, and now everyone does, but it’s perceived as a straight relationship. Nobody knows the “real” Ayumu and Mori in this world, isolating them. Ayumu and Mori are becoming isolated from each other as well. The loneliness each of them feel is seen clearly on the pages. Panels and the art inside them work beautifully to display the space between them now. Since Ayumu has always been female in this world, their friend circles and shared experiences are now different. 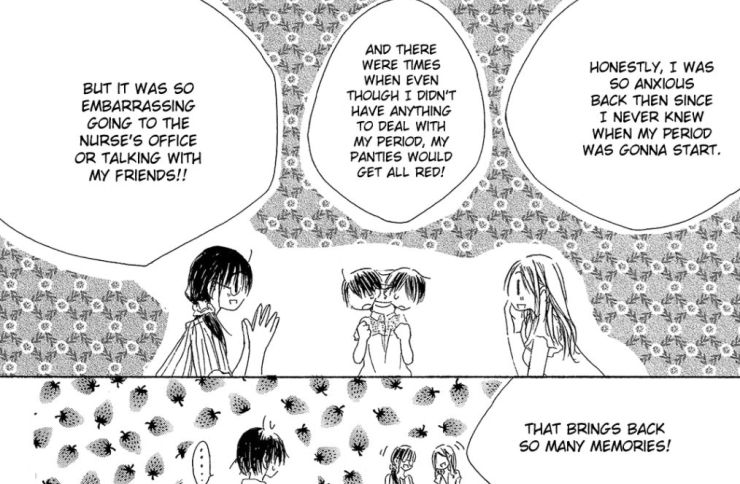 There’s a key scene where Ayumu’s friends talk about their periods, right after Ayumu has started his. Ayumu’s two friends talk about the struggles and embarrassments of periods during their adolescence. “That brings back so many memories!” they say, memories that Ayumu cannot relate to, but would generally be expected to. He is a girl after all. Earlier on, Ayumu’s mom asks if she can give away Ayumu’s old school uniform—a girl’s school uniform—to her coworker’s daughter. “When I was in junior high, didn’t I wear a boy’s uniform?” Ayumu remarks to himself. “I don’t remember getting a picture like that taken,” referring to an ID photo with him in the girl‘s uniform. I find this predicament endlessly fascinating. What would I do? What would others do? In some ways it’s impossible to know, as this could never happen in reality. I suppose that’s what’s interesting about it.

Mori’s situation isn’t quite as complicated, but still interesting. Mori can seem a bit self-absorbed at times, but considering his situation, his position is somewhat understandable. Sex transformation resulting in relationship incompatibility isn’t an unheard of concept within the genre, but it’s much less common to see it from the perspective of a gay character. Mori’s finally gotten a boyfriend, but now his boyfriend is a girl. What does he do now? Mori doesn’t know. On top of that, his inability to make a decision can hurt both of them now and in the future. Will this last forever? Do they just have to move on from each other? Is that even an option? 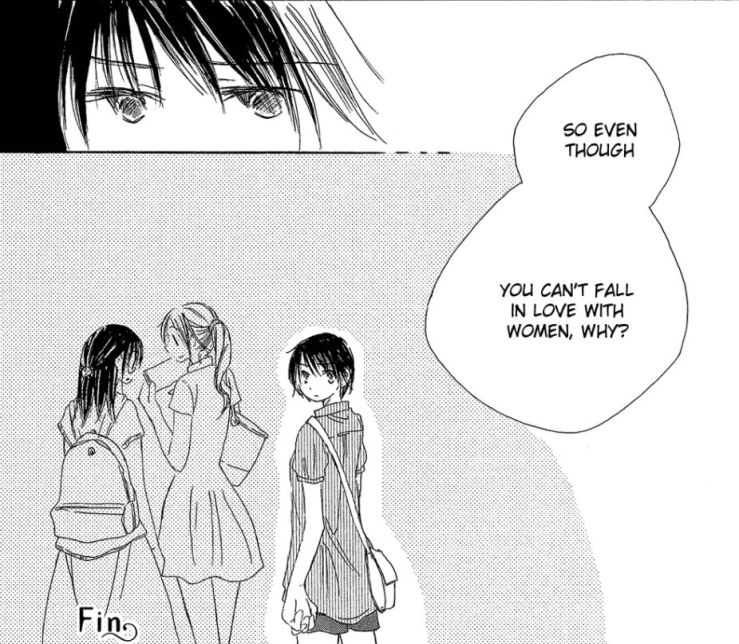 Ayumu and Mori are essentially stuck with each other due to being alone in the world, but those same circumstances are forcing distance between them. They can’t help but wonder if their relationship was ever going to work in the first place, but now they share an experience that no one else can understand. What does this mean for them? This is a fascinating central conflict within their relationship, one that makes the manga well worth a closer look. They are forced together, but also thrust into completely different worlds. They cannot understand each other, yet they must. However, for all the manga’s strengths, the ending stumbles a bit.

Ayumu concludes that they are going to break up, and blames god. Mori tells him not to decide on his own, and says though he hasn’t decided if he can love Ayumu, he’d regret it if he let them break up. They try to have sex, but don’t because Ayumu is too scared. When they wake up Ayumu is back to being a guy, but now Mori is female. God sees that this was a mistake and makes Mori male again after one day. Thus the couple’s adventures in sex swapping are over, but their issues are not. Ayumu misses aspects of being a girl, and is still rightfully unsure about the future of their relationship, as Mori is still unable to say “I love you.” Mori finally says the words, but the central problems in their relationship were never really directly linked to the transformations. Ayumu becoming female simply highlighted and accentuated the effects. The end?

For a conclusion, Hana wa Nisemono’s final chapter hardly feels like one. The point of the manga did not appear to be getting Mori to say “I love you”—it was the issues behind his hesitation, and the unique circumstances the characters were in. Mori being an indecisive prick was part of the arc, but the conclusion misses the forest for the trees. Part of me wants to throw the manga a bone, as these are complicated subjects that are hard to give a satisfying answer to. On the other hand, fixing the problems through divine intervention and ending with what reads as “life goes on” feels like a bit of a cop out.

Hana wa Nisemono’s weak ending doesn’t make it any less interesting to analyze. All the themes of isolation and togetherness are still within the text and there to ponder. Its use of artwork and framing is excellent. The scenes are staged to show the characters’ isolation. Backgrounds are often sparse, or simply missing. The use of screentones to highlight the loneliness of the characters is masterful. In terms of craft, Hana wa Nisemono is grade A material. It’s a shame the narrative isn’t as tight as the ideas and visuals. Still, the fact that these concepts are being explored in manga is a step in the right direction. Perhaps another manga will come along that provides a more satisfying take.