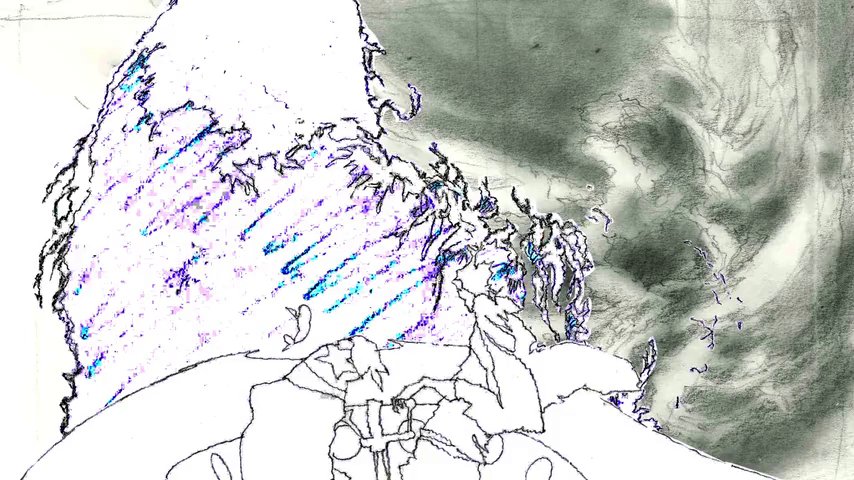 This article is a guest post from Twitter user @blautoothdmand! You can find more of his writing on his personal blog, blautoothdmand.

To say that Shinya Ohira is an unconventional animator would be an understatement. With his boldly distorted and vigorous drawing style, his cuts are unique and instantly recognizable. When sakuga fans talk about Ohira’s animation, they almost invariably sum him with the term “expressionistic.” This is an apt description, but it also has interesting implications: is Ohira’s work a modern, animated continuation of the 20th century expressionist movement? How does his work compare to that of the classic expressionist artists?

First, we need to pinpoint exactly what we mean when we talk about Ohira’s “style”. He has worked as an animator for over thirty years, during which his animation gradually developed into what we see today. His early work in the 80’s mainly consisted of action and effects cuts. He contributed to many OVAs produced by AIC (Anime International Company), and bounced around several studios (including Sunrise, Madhouse, and Pierrot) working on TV shows and films over the course of his career. One such title was Gal Force 2: Destruction (1987), for which he animated a laser beam with a distinctly loose and vivid sense of movement. With its smooth animation and wavy motion pattern, the cut has a lively fluidity to it that can be seen as the first step towards Ohira’s current distinctive visuality. He used the same approach on his smoke effects for Akira (1988) and a flood for Angel Cop (1989). His style truly came into fruition when he started applying this to solid objects – especially people. The earliest such case is his cut in episode 10 of The Hakkenden (1994):

As the swordsman flails around in confusion and panic, his movements are broad, disoriented, and animated with a liquid waviness, making him almost appear jelly-like. Notice especially how from 00:25 onwards the outlines and shading drastically reshape in each frame, creating an extremely loose and deforming quality. If this cut was the start of the Shinya Ohira “style”, then it was further elaborated and solidified in the early 2000s and has since become his defining trademark. Titles like “Kid’s Story” (2003), Kill Bill: Vol. 1 (2003), Fuujin Monogatari (2003), Mind Game (2004), “Wanwa the Doggy” (2008), Momo e no Tegami (2011) and Space Dandy (2014) display it in its full glory. Looking at these examples, we can identify a number of notable visual traits:

A recurring theme in all of these qualities is the way Ohira dramatically alters his objects. Through the first two points, we can see how the expression of the objects’ motions are amplified. Furthermore, we see through the latter three points how the objects’ physical qualities are affected. As the Animation of Anime panelists described it: “he’s a guy who literally makes people melt.” This is an apt description, although I would exchange “melt” with the broader term “morph,” which I think more accurately encompasses what we’re dealing with here. In a Ohira cut, the animated object morphs as it is moving; for each new frame it changes its own physical shape and appearance, thus never being quite solid.

So how can this be considered expressionistic? Let’s see how it compares to the work of the German expressionist masters: Ernst Ludwig Kirchner, Karl Schmidt-Rottluff and Chaim Soutine. 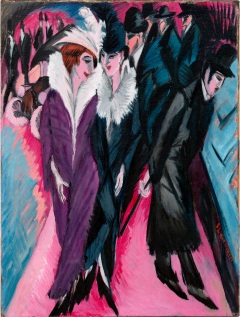 Let’s also throw in Vincent van Gogh and Edward Munch (technically not part of the expressionist movement, but they were important precursors).

Strong colors, distorted shapes and rigid brushstrokes appear in all five of these paintings. Munch and Van Gogh use swirly contours in their backgrounds that convey a vivid sense of movement. Their respective foreground motifs – a screaming man and a cypress tree – are in dynamic relationships with their environments; the former with his eel-like posture and curved head, and the latter with its equally curved, almost flame-like shape. Likewise, Kirchner’s flock of city dwellers is composed as an hourglass shape, seemingly cramped within the tight space. The painting has a striking color palette of predominantly pink and blue. The same can be said about Schmidt-Rottluff’s houses, both in terms of their bright palettes of blue, green, red and yellow, and their loose and organic shapes. Soutine’s portrait displays an equally vibrant use of color in the form of the woman’s dress, while also containing an abundance of paint that creates a violently distorted depiction of the motif. Prominent in each one of them is the vivid alteration of their motifs for the sake of expression. As such, a key quality of both Ohira and expressionist painting is the way in which they alter their objects. Elements such as strong colors and deformed poses in the paintings convey the same amplified expressiveness as the action density and extreme perspectives of Ohira. Futhermore, the same type of morphing that we saw in Ohira is highly present in these artists’ works as well, with the motifs and their distorted appearances carrying a distinct looseness. As the name suggests, the focus lies on expression – something which is achieved not through geometric shapes or properly anatomic bodies, but through strong colors, violent brushstrokes, and vigorous deformations.

And this brings us to what is perhaps the most interesting aspect of Ohira and expressionism, namely that the expression in question is vastly prioritized over the object itself. In other words: the what of visual depiction is overshadowed by the how. As such, they display a notable interplay between figuration and abstraction. The former of these terms refers to the degree of truthfully representing the motif – while the latter refers to the degree of abandoning this representation. For example: if you paint a chair and make it as close to the real thing as possible, then that painting would be utmost figurative. But if you were to distort the imitation of the chair by playing with shape, color etc., then the painting would have a level of abstraction. This balance furthermore includes the aspect of the medium’s own visibility; whereas figuration is all about hiding elements such as brushstrokes, paint and the flatness of the canvas for the sake of immersion, in abstraction these elements are highlighted. (For more on the topic, see my post on The Tale of Princess Kaguya).

In Shinya Ohira’s case, the “chair” in question is the objects that he animates, and the abstraction constitutes his so-called morphing of them. As such, the balance between figuration and abstraction that we see in Ohira carries two noteworthy factors. The first is that his animation, like expressionism, is significantly more abstract than it is figurative. Both utilize and highlight the elements of their respective mediums to achieve a more expressive output, making the representations of the objects/motifs become secondary. However, said mediums are very different. With expressionist painting we’re dealing with static images, but in Ohira’s case our subject is animation; in other words the way things move. What primarily constitutes his medium is therefore the motion created by the relationship between frames. So what can be said about Ohira’s approach to figuration and abstraction given these two factors? First, he uses an emphasis on abstraction over figuration in order to achieve an expressive portrayal of motion. But more interestingly, this emphasis consequently undercuts the object of motion; the animation itself is given more dominance than what is being animated. Through his central method of “morphing as moving,” Ohira not only exposes his objects’ true nature as collections of sequential frames, but also makes them get engulfed by that very nature.

Witnessing a Shinya Ohira cut is thus in several ways a very interesting visual experience. For one, it’s like seeing an expressionist painting come to life. If Van Gogh or Kirchner had been animators, they may have produced similar works. At the same time, this application of expressionism’s visuality onto animation creates a highly unique approach to the medium. His animation boldly calls attention to itself, disrupts the figurative immersion and consumes its objects. With its striking level of abstraction, one would indeed think that it completely goes against the fundamental conventions of animation. However, his approach may actually be in line with Japanese animation tradition. As Tamerlane noted, whereas American animation is mainly concerned with truthfully representing the character that is being animated, Japanese animation instead focuses on the depiction of the movement itself. This is Ohira in a nutshell, to the extent that the “character” (or “object”, as it’s been called in this article) is even abstracted for the sake of more expressive movement. Despite being an extremely unconventional animator, Shinya Ohira is a prime example of the creative possibilities that lie at the heart of Japanese animation.