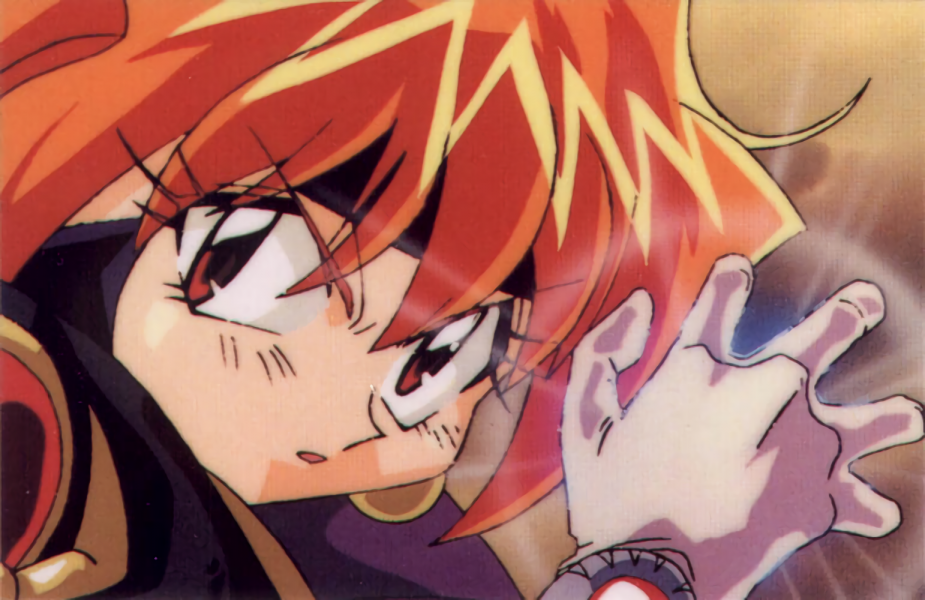 In some ways, I hate the start of a new anime season.  This isn’t because I feel new anime is somehow inherently inferior; in fact, my feelings on this have nothing to do with the product itself.  No, what bothers me is the community experiencing brand new anime only through distilled tweets or YouTube videos and then speaking authoritatively about that anime going forward.  For example, let’s say the first episode of Exciting Anime X was exactly as bad as Critic A thought it would be.  A then pens a piece definitively writing if off.  Huge swaths of fans follow suit, despite the show being between seven and eight percent into its run.  Opinion on the show proliferates over time and consensus calcifies into conventional wisdom, even though the people spreading the belief have no experience with the show.

I’m very much pointing a finger at myself here.  For whatever reason, there are people out there who take seriously what I have to say about anime.  Given that astonishing piece of information, I ought to take care with not only what I say but also how I say it.  I’m not saying fans or critics aren’t free to drop shows that don’t appeal to them.  Folks are totally within their rights to do that.  However, those with influence should be mindful of the subjective nature of their own tastes and viewing experiences when making conclusive pronouncements about a show based only on one or two episodes.

All this is on my mind because I recently finished a show that reminded me that anime－no, that media－can still be truly surprising.  Its ending helped me remember that I should give anime more rope and second chances.  The show I’m talking about is The Slayers. 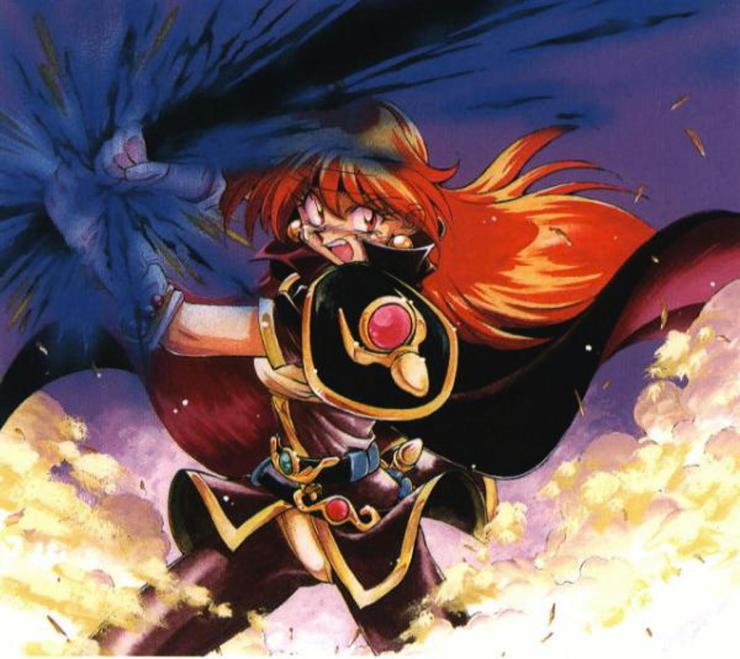 I’m now going to tell you about the ending in great detail.  Normally I wouldn’t directly spoil this sort of thing, but (a) it’s been twenty years (b) there are so many reasons to watch The Slayers beyond the resolution of its plot and (c) the ending is a great example of what you can miss when you write off an anime prematurely.  If you haven’t seen the show through, you likely won’t believe me when I say that its final arc is quite a thoughtful exploration of identity and deep existential struggle.  The last dramatic scene is actually, genuinely affecting!  While weightier parts of the arc are interspersed with cutaways to the silliness the series is known for, the emotional sincerity of the ending doesn’t appear to be in jest.  And, the entire time I’m watching these episodes, my jaw is on the floor because, when I started The Slayers,  I thought I knew what I was getting into.

A brief bit of setup: The story’s first major villain is a fellow known as Rezo The Red Priest.  He is a powerful and formerly benevolent mage who happens to be born blind.  In order to gain his sight, Rezo resurrects a legendary monster to use as a source of magical energy.  You can probably see how this might go bad.  Said monster possesses Rezo, and series heroine Lina Inverse and her crew are forced to kill him in order to prevent the apocalypse.  Fast forward to the final act of the show.  One of Rezo’s followers, who was infatuated with the Red Priest, uses sorcery to create a clone of Rezo.  Her goal is for the two of them to realize Rezo’s original ambitions. 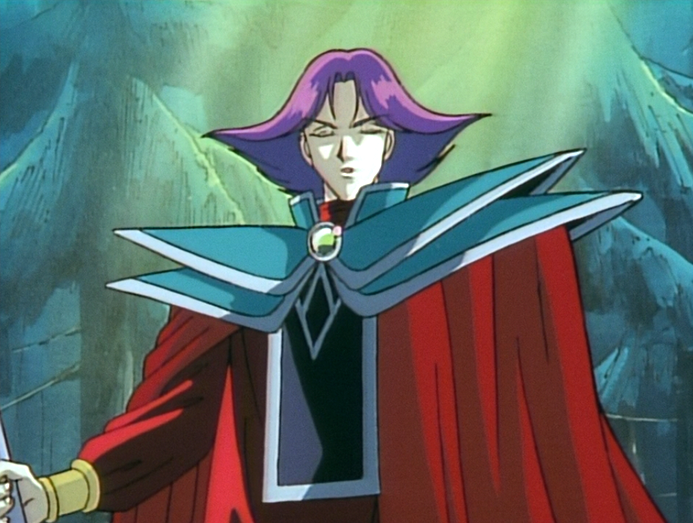 Copy Rezo (as characters in the series refer to him) initially plays the part of an obedient creature, an object for his creator to project onto.  But, once he gains enough magical energy, Copy Rezo betrays his creator and reveals himself to be a being with his own intentions.  Lina, Zelgadis and the other heroes don’t seem to fear Copy Rezo very much in their preliminary skirmishes because, well, he’s “just a copy.”  They defeated the original already, so a mere clone of that original should prove immanently beatable.  As a viewer, I too shared their underlying assumption that a copy is just a knock-off of the original.  Well, it turns out that, whatever a copy’s magical DNA might be, there is no logical restriction on that copy surpassing the power of its original.  And transcending Rezo is what his copy is living for.

It will likely surprise no one that these scenes drew my mind to Kaiki Deishu’s monologue about fakes in Nisemonogatari.  He argues for the counterintuitive notion that a fake is more valuable than its original.  The idea is that the fake has to work very very hard to convincingly imitate the original, and this extra labor adds extra value.  Such imitation involves not only projecting a foreign nature (one that isn’t yours) but also suppressing your own nature at times, in order to come across as whatever the fake is a fake of. Kaiki’s view lies somewhere in the middle of the two beliefs expressed by characters in The Slayers.  Certainly, Kaiki assigns more worth to the fake than the “just a copy” view expressed by Zelgadis; however, I don’t think Kaiki’s philosophy would line up with Copy Rezo’s either.  Despite the fake being more valuable than the original, it never ceases to be what it fundamentally is: a copy.  Rezo’s fake violently opposes this line of thought and believes he can grasp for himself an existence which not only transcends his original but also bears no relationship to it.  He wants an identity entirely divorced from Rezo The Red Priest.   In short, Copy Rezo wants to be an original.  Since the original Rezo failed to kill Lina Inverse, Copy Rezo believes he can self-actualize by completing this task.

As the final battle escalates, the fake reveals more and more of his psychology (as villains are wont to do).  You see how all-consuming Copy Rezo’s existential crisis is and how mentally broken he is because of his singular focus on it.  He demands Lina perform Giga Slave－the spell that defeated Rezo－on him so that by surviving it he can validate himself.  An important complication here is that any mistake on Lina’s part will cause what is essentially the end of the world; yet, Copy Rezo is willing to grant the possibility of the world’s destruction in order to find out if he matters, if he is more than just some lovesick sorceress’s accident.  Rather than being interested in absolute power or kingship, copy Rezo wants to free himself of a crushing inferiority complex.  “Maybe they’re right, and I’m ‘less real’ because I’m ‘just a copy’?”  I couldn’t believe I was starting to feel something for this character!  I originally thought he was “just a copy” of a fantasy villain archetype. Most anime fans know that there are a whole bunch of seasons of The Slayers, so this first one couldn’t end any other way than with Lina coming out on top.  As with Rezo, Lina has to kill Copy Rezo in order to stop him.  With the help of some magical macguffins, she mortally wounds him.  After displaying some denial about his loss that is actually kinda uncomfortable to watch, the fake asks Lina why he lost.  The diminutive enchantress, as serious as we see her at any point in the season, explains to him that he has betrayed his own philosophy.  He is so entirely absorbed in transcending Rezo, that he could not get out of his original’s shadow.  His life becomes defined by the thing he wants to divorce it from because he pours that life completely into being superior to that thing.  In order to create a meaningful existence entirely apart from Rezo, Copy Rezo needed to create his own life and experiences.  Yet, all he is able to do is “stare at Rezo’s back.”  He could never see beyond his own arbitrary boundaries as an imitation.

An ancient and magical tree called Flagoon plays a part in defeating Copy Rezo, and the vanquished mage asks to be buried beneath it.  In this way, his life and death can serve as lessons for those who participated in the battle.  Flagoon overcomes its circumstances to be reborn and grow anew.  Copy Rezo, on the other hand, could not prevail against his own internal, emotional crises. Several of these moments are probably going to stick with me for a while, and there is quite a bit of food for thought here.  In a way, it almost feels like I was the first person to have ever seen this arc because I’ve not heard a single soul mention it.  Granted, it’s certainly not what The Slayers is known for or reputed to be good at, and it’s likely not what the viewer is approaching the series to get.  But, the arc is executed so well and not in a way that detracts from the show’s brand of humor.  Nor is it too tonally jarring because, rather than suddenly jumping into a new mood headfirst, The Slayers has the good sense to step into it gradually while not forgetting about why people are watching in the first place.

Anime fans can miss out on stuff like this final arc of The Slayers when they choose to only engage with a show through a tweet or a clip.  Anime critics, myself very much included, can be too quick to definitively write a show off, which can have a ripple effect within the community.  It’s a difficult balancing act to allow shows the room to unfold while not wasting time on media we find unappealing.  Regardless of where we draw the line, though, giving anime second chances to impress us might result in some pretty amazing revelations.