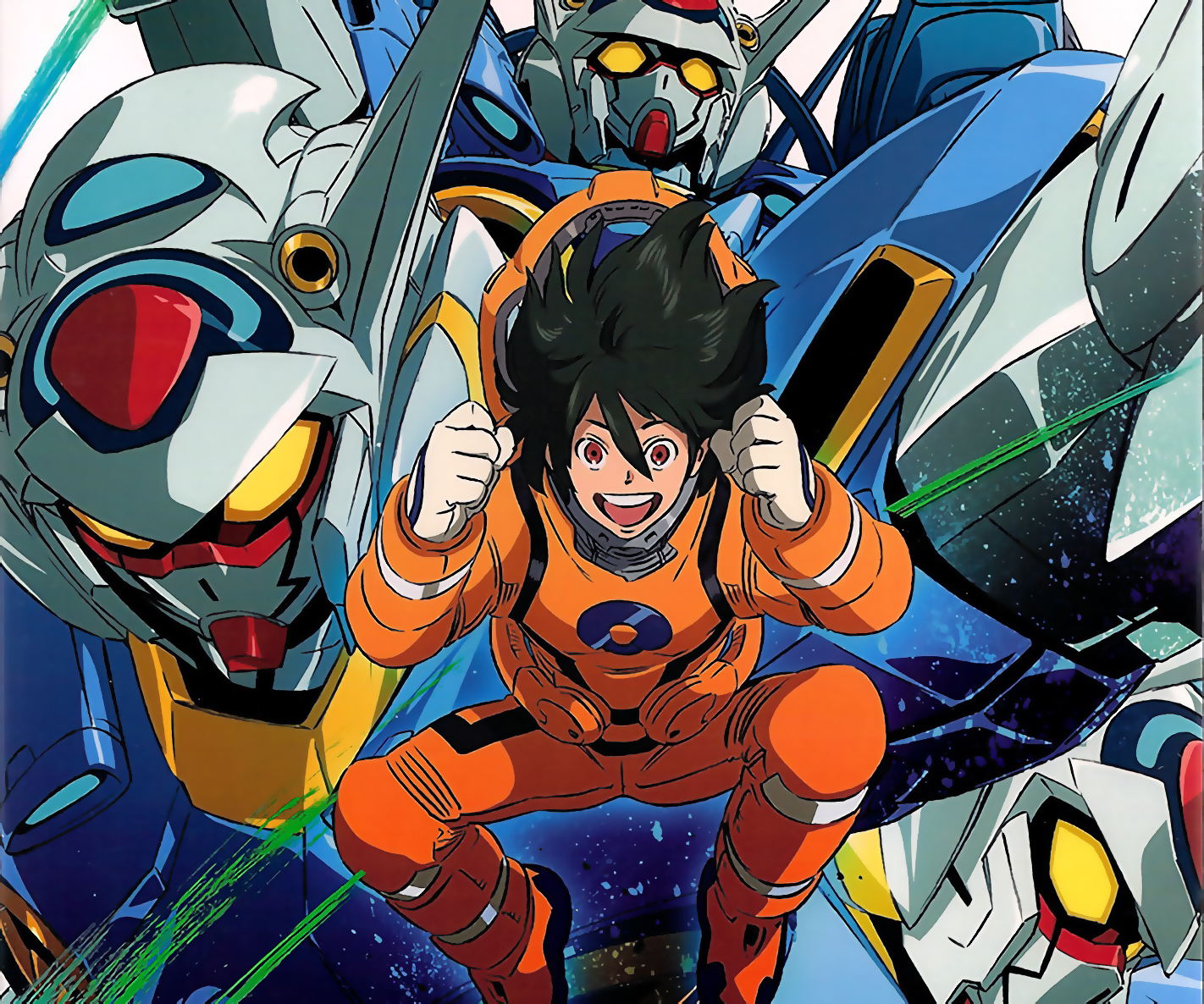 As Yoshiyuki Tomino is turns seventy-five years old this year, he is remembered in his homeland as one of the most distinguished figures in the anime industry. He’s helmed many of the most influential mecha anime of the 70’s and 80’s including Invincible Super Man Zambot 3, Space Runaway Ideon, and of course, Mobile Suit Gundam. That his work is of an enormous significance is rarely questioned. Yet outside of Japan, especially in America, the man himself is not so revered. Perhaps it is because so many were weaned on the stern-faced bishounen of Gundam Wing and are accustomed to the more conventional mecha series that spawned from his legacy, but few seem to appreciate Tomino’s directorial voice in the Western sphere. Nowhere is this made more obvious than in the reception of Gundam Reconguista in G (shortened to G-Reco), possibly the most Tomino anime ever made.

Anticipated as the franchise creator’s return to Gundam after nearly a decade-and-a-half long absence (his last contribution being Turn A in 1999), fan expectations for G-Reco were high before release. A new TV anime with a relation to the Universal Century timeline (no matter how minor) will always have fanboys frothing, and this was no exception. Akira Yasuda’s mechanical designs, while unconventional by Gundam standards, were greeted warmly as a breath of fresh air, as were Kenichi Yoshida’s jubilant character designs. Yet when the first episodes finally aired the popular consensus became torn. G-Reco defied the standards of modern anime fans from its very beginning, featuring obtuse dialogue yet little in the way of exposition. Things only became more confusing as it went on as various factions were introduced without explanation and characters acted in impulsive, illogical ways. For this reason the show remains the lowest rated Gundam television series on AnimeNewsNetwork and MyAnimeList today.

Despite the controversy of G-Reco’s initial airing there is surprisingly little thoughtful criticism to be found of the series in English today; instead it is written off as ‘nonsensical’ or ‘convoluted’ and quickly discarded in favor of the newest season of Iron Blooded Orphans (a series far less inspired and thus more immediately digestible). Part of what makes Reconguista worthwhile to discuss is just how non-digestible it actively manages to be and how that contributes to the experience of engaging with show. Tomino refuses to sacrifice the integrity of his world to appeal to the viewer, instead choosing to present slices of that world, rich with detail and without narrative streamlining. It’s as if he begins in media res but never stops, giving the viewer the role of a mere observer rather than an audience member, providing a portal into another world that is truly alien. The dense, moment-to-moment eccentricities surely put off all but the most oddball and dedicated of fans, but for those few it reveals a kind of magic rarely seen in commercial media.

Reconguista in G’s setting is its strongest trait, forming the basis of all conflict and creating a point of relation to the real world, though that point is too often passed over by Western viewers. For convenience sake, and to spread the good word, I will elaborate on some of the plot points of the series that many may not have caught on to. Like Turn A Gundam before it, G-Reco is a response to the Universal Century timeline, much of which Tomino authored himself to examine the nature of character relationships in wartime and question the future of humanity. One of the most prominent features of UC Gundam is how many people are senselessly murdered, something that helped earn Tomino his ‘kill em all’ reputation but also a useful technique for conveying the realities of war during a time when few anime series took the theme so seriously. Though he prefers his casts to be made up of temperamental teens, they’re always aware death’s unrelenting presence from the loss of their own families, friends, or crew mates. G-Reco takes a different approach,  introducing a world far-flung from the endless battles of UC that has enjoyed relative peace for as long as any of the major characters can remember due to a collection of societal norms forbidding the use of high-grade offensive military weapons. This set of taboos, known as SU-Cordism in the show, are worshiped as a religion by the public that doesn’t quite understand their specific purpose anymore.

While clearly embellished, an informed Japanese citizen would likely understand the parallel Tomino is drawing to postwar Japan, bounded by constitutional restraints that restrict its military capacity to be limited for self-defense and nothing more. This is but one of the effects of US occupation that are still felt by the Japanese public today, a taboo to keep past enormities from ever being repeated, and many pacifist citizens cling to it for the safety of their country. Japan’s violent history has given birth to a generation of anti-war activists, several of whom have made significant contributions to the anime industry. Antiwar themes permeate the works of Hayao Miyazaki, he himself being a staunch opposer of Japan becoming involved in foreign conflicts. And also Mamoru Oshii, who created his landmark film Patlabor 2 in direct response to Japan’s involvement in an early-1990s UN peacekeeping operation in Cambodia that violated the country’s isolationist policies.

Yet today Japan is on the brink of moving on from their postwar restrictions through Shinzou Abe, Japan’s current Prime Minister and their first leader to be born after World War 2. Abe has introduced controversial policies that would allow the country to have increased offensive military capabilities and is attempting to bring Japan out of its economic slump and return it to its former glory. He is even interested in nuclearizing to give his nation a greater influence in world politics, a stance that has faced staunch opposition both domestically and abroad. With rising tensions in the East-Pacific between Japan, China, and North Korea, this sense of an artificially imposed taboo being the only shackle that keeps the country from engaging in war on foreign soil is a concern on the minds of many Japanese in these times, and Tomino channels this into the premise of his anime by casting remilitarization as the spark of war.

Furthermore, while it’s not as directly allegoric as SU-Cordism and Japan’s own post-war constitution, the group of factions that clash throughout the series also simulate a kind of real world confusion that is felt when observing the complex regional disputes and proxy wars that occur around the globe today. To be clear, there are about five active factions competing in the series during the peak of conflict, and all of the show’s conflicts stem from frictions between these groups. It is eventually revealed that two of these factions, the more advanced settlements from space, are attempting to recolonize earth with their superior militaries. This brings the plot close to G-Reco‘s spiritual cousin Turn A Gundam, but here the execution differs hugely. Despite their staggered introductions it can be quite difficult to keep track of the goals and members of each faction, and characters change sides on several occasions without voicing their reasons. This is the result of Tomino’s hands-off worldbuilding, true-to-life in that complex problems are not so easy to comprehend, especially if you are thrown directly into the middle of the conflict. Even upon rewatch the show can be overwhelming in its breadth as it shifts focus across its large, varied cast and expansive world, forcing viewers to experience the narrative not as a story being told but as a place to be discovered.

Characters in G-Reco are similarly obtuse, almost alien in a way. Dialogue exchanges are not like those we have on earth; they’re disjointed and prone to rapid shifts in topic or tone. Additionally there is little practical use of internal narration, making it even more difficult to understand what the characters are specifically thinking at any given moment in time. Despite this, much of the cast manages notable development over the course of the show. Each character is given a unique motivations to fight, from Mask’s attempt at revenge for years of ethnic oppression, to Klim Nick’s desire to take power from his father, the Amerian president. Expressive character animation reveals immediate reaction and emotion far more successfully than other Gundam TV series, and small, humanizing details, such as toilet in the mobile suits for long flights, help create a point of relation. These characters are made to feel more human than they act, a contradictory technique that grounds weirdness in familiarity much like Tomino’s world building, adding another layer of richness by embedding imperfection into dialogue and interaction.

I’m sure some reading consider these arguments a flimsy excuse for poor writing, and many may be wondering, ‘For what purpose?’ Is there a meaning to be discovered within G-Reco at all? Is Tomino really just a dried up hack who has gone senile? In truth, the meaning of this anime isn’t obscured nor is it unfamiliar to Gundam fans. G-Reco‘s primary theme is the self-actualization of a new generation, and it’s written into every facet of the series. This message is a thread that runs throughout all of the Tomino-directed Gundam starting from the very beginning, an earnest attempt to communicate to the children and young adults watching that even they can change the world if they choose to be a part of it. What differentiates this series in particular is how its own presentation is made thematically relevant.

By presenting such a dense and detailed narrative that is both inherently foreign and simultaneously grounded by political realities and curiously relatable characters, Tomino creates an anime that requires engagement beyond what a normal anime expects. Those who dedicate the effort and attention necessary to understand the show’s subtext concerning the dangers of militarizing without considering historical consequences can take their experiences to the real world, aware that to understand you must first engage. There are Gundam fans who do not take that step, instead opting to complain about their confusion in forums and message boards. But if those fans are not going to engage in their hobby then what chance do they have of making meaningful strides to change the real world? It’s a high barrier that Tomino has created, and perhaps he was a little too optimistic of his fanbase, yet G-Reco has still managed to create a very dedicated fanbase regardless.

There is a very special scene at the end of the finale, a microcosm of the show’s overarching themes. After all of the conflicts have been resolved the protagonist, Bellri Zenam, leaves his friends to explore foreign lands. Approaching a white-capped mountain, he comes across and old man who directs him to the Subashiri trail for a hike. It is a trail that actually exists today on Mount Fuji’s East side, one more difficult trails known for its beautiful scenery and foliage. This place that Bellri has traveled to is Japan, and that little old man is played by Tomino himself. Inserting himself into the final scenes Tomino is giving Bellri, and his viewers, an opportunity to challenge themselves after the anime has finished. The Subashiri trail is a real, tangible place to visit, so grab a bike and get out there. Even outside of Japan we may take inspiration from this, learning that as much as we must engage in anime so too must we engage society and nature. Whether its finding another mountain to climb, or volunteering at a park, or taking a cross country roadtrip, what matters in the end is having the will to personally engage with the world around you.