Let’s be honest. The recently concluded summer anime Orange, adapted from Takano Ichigo’s manga of the same name, didn’t always deliver on the vibrant visuals of its source material. Like many shows, I can’t help but wonder how much of the overall impact of the show was lost due to some glaringly bad drops in quality near the show’s end.

Despite its shortcomings in animation, Orange effectively delivers an authentic portrayal of the insidious decay depression can inflict upon one’s relationships and sense of self-worth. And just as skillfully, this show reminds us of the power relationships can have in our lives. In striking a balance between hope and despair, togetherness and isolation, Orange reveals the true nature of its tale.

Orange isn’t a shoujo love story. It’s a war story. A story of a group of friends desperate to save one of their own. Friends willing to fight against time and challenge fate, all for the life of someone they love. A war between love and death—that’s what this show is about. And that war isn’t limited to anime. You or someone you know may be fighting in that same war right now, with the same stakes. It’s worth talking about Orange because it’s a reminder to us all that depression can take away our loved ones unless we’re willing to fight for them.

Naho Takamiya and her group of childhood friends welcome Kakeru Naruse, the new boy at school, into their tight-knit circle. Naho and Kakeru find themselves drawn to each other, but fate intervenes and carries them away along diverging paths. He dies a few months later, leaving a hole in Naho’s heart and her circle of friends permanently broken. A decade later, Naho learns Kakeru committed suicide. Stunned by the truth of his death, Naho devises a plan to save Kakeru that will bend the laws of reality. She and her friends decide to pin their hopes on a miracle by sending letters back in time to their sixteen year old selves. Before we go too much further, let’s address this…implausible aspect of the show.  Later on, we learn how this works but it adds nothing to the story. If you take it at face value, this “sci-fi” handwaving aspect of the show feels very weak. But there could be more to this than there initially seems to be.

The time-travelling letter, while serving as a plot device, came to represent something deeper to me as the story unfolded: it’s just a daydream. A way of coping with the guilt of living after a loved one has passed on. What if Naho and her friends didn’t send letters through time? Every bit of this show could be just Naho having a daydream about saving her long dead friend, and we’re just seeing that play out. Interpreted this way, Orange’s melancholy and creeping sense of dread develops an even more sorrowful depth. Naho couldn’t save the friend she loved, but in her fantasy she has the courage to change her past—courage she couldn’t find when she needed a decade before.

Every time Naho retreats from her feelings and fails to overcome her own shy nature, Kakeru draws further into himself. Her other friends each try to reach him in their own way, but he hides his pain with an easy-going demeanor and well-placed excuses. As the plot develops, Kakeru uses his relationship with Ueda, the upperclassman, to provide a further layer of seperation from his friends. Ueda serves as a distraction that requires no real emotional investment or connection for Kakeru. Ueda, for her part, seems more interested in him as a possession than any feelings he may have. These examples show how the emotional beats of Orange to ebb and flow across a battlefield of misunderstanding and missed chances. And while its difficult to sympathize with Kakeru’s use of Ueda as a selfish distraction, he’s desperate to do anything that will distract him from the despair and guilt, even while paradoxically believing he deserves to feel miserable. Kakeru’s interlude with Ueda serves another purpose in that its an early and subtle sign that depression has warped his judgement.

On the infrequent occasions where the story unfolds from his point of view, Kakeru’s depression tangibly impacts the way he sees the world.  In a scene during the school’s sports festival, he stands among a crowd of people. Suddenly colors become muted, the crowd’s voices a cacophonous jumble of sound. Kakeru finds himself thrust into battle; besieged by his own anxiety. For some, depression has a way of muting the entire world. Colors become muted, sounds that were once pleasant become grating. I’ve experienced something similar in my own struggles and seeing Kakeru grapple with it in that way felt uncanny. In Episode 12, he begins to collapse under the weight of his guilt over the death of his mother. He’s curled up in the shadows with his back to the wall, the light just out of reach. The sense of hopelessness evoked in the scene shows the growing power Kakeru’s depression now has over him.

Despite his best efforts to keep Naho at arm’s length, Kakeru finds himself being drawn to her. Eventually, with the help of his friends, he begins to change. In a scene near the end of the series  Naho offers Kakeru a crumpled box of chocolates. Battered but still whole, it serves as a metaphorical returning of not only his own heart, but permission for him to share his feelings with the people he loves. And for all that he’s changed, it still might not be enough. In the final episode of the series, Kakeru’s defenses finally crumble. Naho, Suwa, Takako, Azu, and Hagita frantically search for him and arrive to see a moment where fate turns just a little differently thanks to their efforts. Facing the ending of his life, Kakeru falls away from death and into the arms of his friends. The living win the battle, but the war goes on. The future changes the past, and now Kakeru no longer has to face his pain alone.

Orange works as a show despite its stumbles with animation and fanciful premise because at its heart it’s an act of catharsis, a fantasy born of a desperate need to accept the unimaginable. In its sorrow, in that daydream of a life lived differently, Naho and her friends find a way to confront the past and, crucially, to heal. In facing the truth, a broken circle becomes whole once more—in both the past and the present. 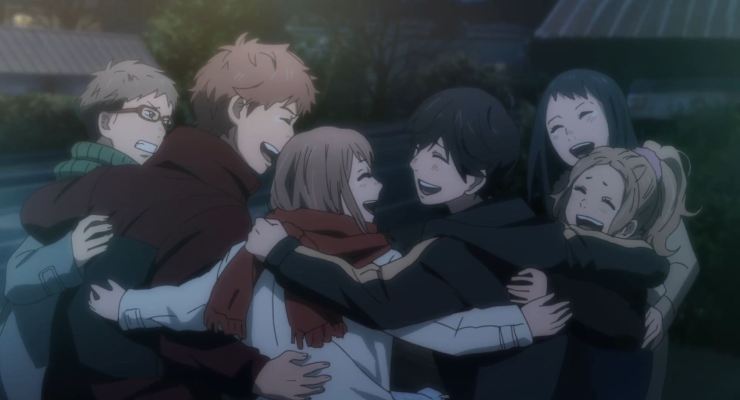 (If you know someone who suffers from depression, there are ways you can help. Learn more about the warning signs and reach out to people whom you think may be hurting. And if you struggle with depression, remember that you don’t have to struggle alone.)