In 1981, a small group of friends had a desire. At some point, watching wasn’t enough, knowing wasn’t enough; a well of joy and passion had overflowed – they wanted to be part of what they loved. And so they put their hearts into it. What they produced was five minutes of animation, but even now, thirty years later, the ripples of that one animation can be felt. Their desire was to contribute.

It’s now 2016, the dawn of a new year. Everyone is reflecting on 2015’s TV series and Animator Expo shorts, earnestly seeking a king to crown ‘Anime of the Year’. It’s only natural to look back before moving forward. But for a few weeks, I was absent from the festivity and landscape of conversation – I was getting burned out. In all honestly, it was probably from watching too many shows this past Fall season, all while trying to keep the podcast on a regular schedule and moving forward with plans to start the site you are reading now. Toss in regular-life work and the holidays, and you begin to understand why I’d been swept up in passivity. I was thinking the anime gig might not ‘be right’. Whatever ‘right’ was.

As some of you may know, I am a big fan of film. Watching film, knowing film, I love it, so with me disenamoured with anime, thoughts of putting my heart into something else crossed my mind. I found it increasingly hard to watch shows, not because I didn’t want to, but more because I didn’t want to put the effort into it. I am of the mindset of if you’re going to watch something, pay attention and watch it right, otherwise you are wasting your time. With so many movies to watch, so many songs to hear, so many books to read, no one will be able to consume it all in one lifetime, I’ve accepted this. I’ve also accepted that I don’t have time to revisit most things after the initial viewing. It’s a damn shame, but it’s a damn fact. Or, I thought it was. I had lost my pathos – what I called ‘Daicon spirit’ faded into the background. 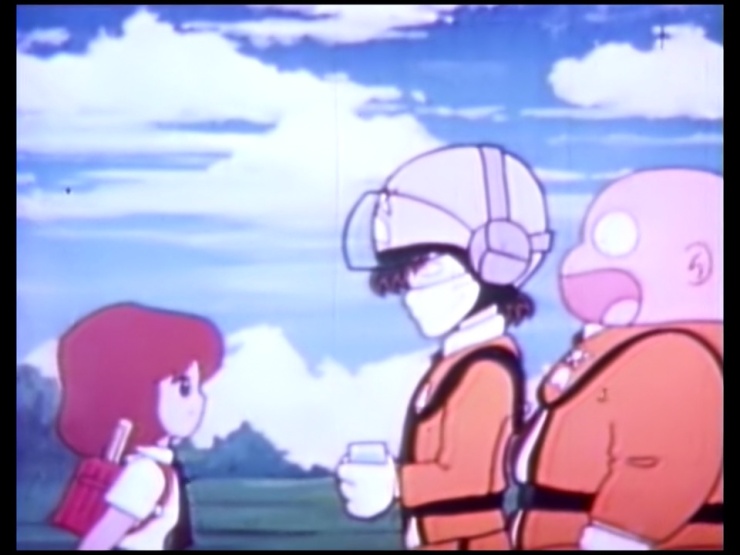 Before I continue, it’s imperative that we define just exactly what ‘Daicon spirit’ means. I refer to the animation that opened Nihon SF Taikai in 1981 and 1984, both sharing the title Daicon.  Anime has undergone various movements and revolutions in its story, so why single Daicon out? Because Daicon blurred the lines between fandom and ownership. Historically, it was often the spiritualists, the leaders, or the elderly who were designated as ‘the owners of stories’. They were charged with keeping tales of heroism and allegorical fables, and thus, for the longest time, the stories that defined a tribe, a people, or a culture were held by very few.   The idea that you could take part in your media was a revolutionary one.

1950 was the advent of television in Japan. Fourteen years later, Tezuka makes Astro Boy a ‘moving manga‘. Ten years after that and the beloved Yamato defines a generation; half a decade later: Daicon. Now the common man could tell his story. Daicon was for anime what the digital camera was for film. It’s spirit is one of contribution, a passion to share and be shared, a celebration of what is and will be for anime. It brought about the founding of studio GAINAX, whose works would go on to shape the world of anime. Some might argue it started (or cast the light on) the existence of the otaku subculture. Anime and the otaku are still here, but GAINAX, the vessel of the ‘Daicon spirit’, seems to have checked out early. So where did it go?

The GAINAX of today bares little, if any resemblance to it’s former self. Look GAINAX from the 80’s, the 90’s, or even ten years ago, and you’ll see a very different company. Founding members like Yasuhiro Takeda and Takami Akai divorced themselves from the studio and we haven’t heard from them since. Hideaki Anno and Shinji Higuchi are still active in their respective fields. Higuchi responsible for the tokusatsu antics of the Attack on Titan kind, while Anno, ever the recluse, started studio Khara to finish the Rebuild of Evangelion project. Or maybe not so reclusive; the two are teamed to co-direct Toho’s Godzilla Resurgence and worked together on Nausicaa spin-off, Giant God Warrior Appears in Tokyo. In fact the whole Animator Expo is Anno’s baby and might be the closest thing to ‘Daicon spirit’, but I’ll get to that later. You can argue that these two are the most active of the bunch, but I want to remind you of Yoshiyuki Sadamoto.

Sadamoto’s character designs are iconic, borderline archetypal. but much more than this, the Yoshiyuki Sadamoto style is the GAINAX style. Even the untrained eye can pick out the distinctive shape and look of a Sadamoto design, whether it be the cast of Wolf Children, the Evangelion manga, or an album cover for Eric Clapton, it’s the same – the name ‘Yoshiyuki Sadamoto’ is a seal of quality. Out of all of the founding members, I feel it is Sadamoto who best exemplifies the Daicon spirit, not just for his quality, or even consistency, but because he is capable of imbuing emotion in his work, even if it is drawn by a different key animator. That is power. That is art. Even after separation through several filters of people and processes, those character designs do exactly what they where intended to. Prolific animator, Yasuo Otsuka, only regards three people as being more talented than himself: one Sadao Tsukioka, the famous Hayao Miyazaki, and Sadamoto.

But Sadamoto’s work with GAINAX ended with Diebuster in 2006, Anno’s shortly thereafter in 2007. But that’s not when the Daicon spirit gives up the ghost. At that time, GAINAX was still alive and healthy, airing Hiroyuki Imaishi’s breakout mecha homage Tenga Toppa Gurren Lagann. Imaishi had worked alongside the greats of GAINAX primarily as an animator, even directing under Anno for the first episode of Re:Cutey Honey, but it wasn’t the seniority around the office that made Imaishi the recipient of the Daicon torch, it was his attitude towards his work.

When I first saw Gurren Lagann I was overcome by it’s sheer tenacity. I had no contextual knowledge of who was working on it, what it was referencing, or the situation at GAINAX, but I enjoyed it all the same. The phrase ‘who the hell do you think I am?’ imbued me with a desire to do better, invoking mental images of Simon and Kamina refusing to back down when times got tough. What I didn’t realize was that I was being told it was ok to be a child at heart in an adult world. 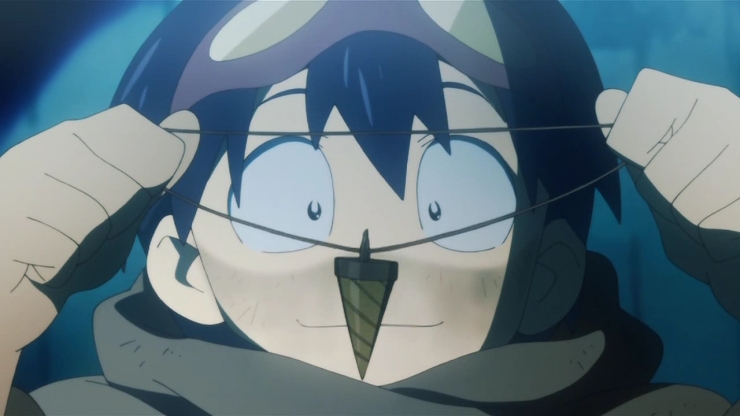 Gurren Lagann in and of itself is a Daicon. As the founding members of GAINAX left, their stories became that much more distant. But Imaishi brought them back to us. Drawing continual comparison, reference to, or downright cannibalizing older anime and fandom is what made the original Daicon so charming. It was made by fans, for fans. It’s a notion that was used in Anno’s Gunbuster and repeated in Kazuya Tsurumaki’s FLCL, but epitomized in Imaishi’s Gurren Laggan. Except this time, prior GAINAX works would be amalgamated – the works made ‘by fans for fans’ were now being referred to in the work of someone who loved works made ‘by fans for fans’.

But that is almost 10 years gone at this point. The last major show of any note at GAINAX was Panty and Stocking, another Imaishi brain-child that was far too short lived. I’m sure someone reading this is going to leave a comment proclaiming the need to recognize Medaka Box which I didn’t even know had an anime adaptation until a week ago. Or maybe no one else remembers and that comment will never appear. Either way, you get the picture; GAINAX, the studio responsible for Daicon spirit, is on ice. More melancholy yet, wherever you look to find the last glimmer of gold in the ashes, you only find more ‘once was’.

Of all the good to come out of Khara’s Animator Expo, the attempt to create a Daicon for this generation was a fruitless one. Many of the shorts where lackluster, neat ideas at best. The highest compliment you could pay some of them was ‘that’s nice’, failing to use the other 130 characters Twitter provides. Out of 35 shorts, you can easily count the truly valuable ones on your god-given fingers. The ending short, Cassette Girl was the biggest disappointment, because it did nearly everything right. Reducing the climactic action sequence to 4:3 aspect ratio, adding dirt filter, and the banding at the bottom was perfect, the stage was set… but it was all set aflame. I full-heartedly agree with the message Cassette Girl proclaimed, old media is to be remembered and cherished, but telling it through a CG was a fatal mistake. If anything, it’s proof that director Hiroyasu Kobayashi does not understand Daicon spirit.

The goals of CG and hand-drawn are completely opposed. CG has always set out to duplicate the images we see in reality, to be more real then the real thing. CG leaves no room for a gap between life images and artificial ones. It starts to deteriorate with age as the years go by. But the same problem does not persist with a drawing, some have even come to prefer the style and art of 80’s anime over that of contemporary imouto. A drawing is forever one step removed from reality, and we accept that, embrace it even, and use it to artful advantage. But this topic is of a scope much too large to explore here and now. Perhaps Ian Condry put it best in his book, The Soul of Anime, referencing Michael Arias’ film Hope: “The pencil stubs are a poignant symbol of the labor of animation, the personal efforts of many people. Don’t we all hope that worn pencils like these will someday add up to something much larger than ourselves?

If CG is the future of Daicon spirit, than it truly is dead. But it’s not. The Daicon spirirt lives on in productions like Space Dandy and at studios like Kyoto Animation and SHAFT. I ask people what their favorite GAINAX show is, and they say Kill la Kill either ignorant or half jokingly, it doesn’t matter which. I look at auteurs like Kunihiko Ikuhara and Masaaki Yuasa who are pushing the medium forward. At some point you have to stop and ask, was Daicon spirit ever exclusive to GAINAX? And the answer is no, and it hasn’t died. It lives and breathes in every little piece of sakuga, every homage, and in the soul of every hardworking staff member on a production board somewhere who really cares and loves what they’re doing.

But most of all, it lives on inside of us. The story is that only three people worked on Daicon, it’s not 100% accurate, but there’s a reason we remember it that way. Because each of us says, ‘I could have been one of those three’ – we make it personal. Because the Daicon spirit is something personal. Once I realized this, my love for anime and burnout could not exist within me at the same time. I can guarantee you that back in 1981 that small group of friends had no intention of reaching me, but I wasn’t about to let long hours of pencil stubs go to waste. It rekindled my desire to contribute, because watching wasn’t enough, knowing wasn’t enough – And so I put my heart into it. That is Daicon spirit. It lies just on the border of your waking mind. But it’s something you will find here.