Don’t miss an episode! You can watch Miss Kobayashi’s Dragon Maid on Crunchyroll!

“Considering  its visual limitations, this episode is handled better than I expected…”

A solid, if visually unremarkable episode. I actually found the lack of outrageous action a nice change of pace. There’s more space left for the quiet, emotional scenes, which are surprisingly touching here. Kobayashi is maturing into a responsible mother, putting Kanna’s needs above her own. The girls are finally starting to resemble a plausible family. 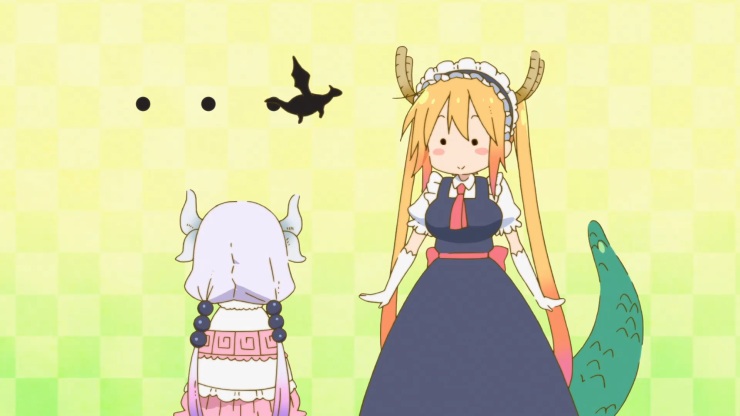 The story is tight and mostly focused on the main characters. Elma gets a few brief scenes to remind us she still exists. Lucoa brings the usual boob jokes, but at least her presence at the sports festival is logical. Riko appears more often but hardly dominates the schedule, which is just as well–she’s not a very interesting character, defined only by her obsession with Kanna.

There isn’t much character animation to speak of, yet Kanna seems to exhibit more emotion here than any other episode so far. Her typical lack of expression is actually an asset in this case. Her impassiveness feels natural for her personality, and the impact is much greater when she does reveal her feelings. Kobayashi, being a fairly stoic character, also benefits from this to some extent. On the other hand, the normally energetic Tohru doesn’t leave a big impression here; fortunately she only plays a secondary role in the story. Considering  its visual limitations, this episode is handled better than I expected, especially coming after the Yamada/Nishiya collab.

“Most condemning of all was the lack of stand out animation this episode.”

Kanna is the cutest and most pure dragon I have ever laid eyes on. Underneath her calm demeanor is an energetic soul filled with a zest for life, which makes her a joy to watch on screen. But a major disappointment is that this episode seems to happen around her rather than actually being about her. The opening is consumed by (and ultimately wasted on) the plot point of Kobayashi getting the time off work to attend Kanna’s school sports festival. It’s a story that has been done over a million times, leaving no room to doubt that Kobayashi will make it in the end. I would not put it past Maid Dragon to put a sincere, heart-warming spin on an old troupe – but instead they swept it under the rug. Adding insult to injury, this plot line in no way shapes or effects the rest of the episode, Kobayashi’s presence has no emotional baring on the outcome of Kanna’s endeavors.

The only semblance of good storytelling this episode is in Saikawa’s mistake setting her back and trying to overcome that. There’s a very profound complexity of emotions to explore in being confident in one’s abilities but making one simple mistake that can’t be recovered from. This is the high point of Maid Dragon 9, however that high point is marred in the swamp of gross fetishization and titillation, and as the track record shows, Maid Dragon‘s has been less than perfect in this regard. 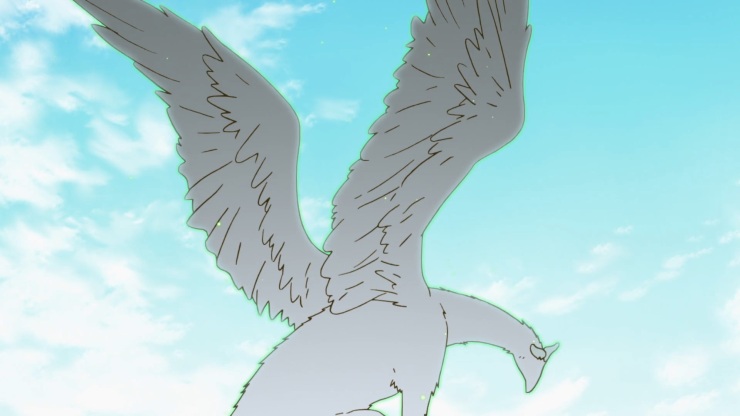 Most condemning of all was the lack of stand out animation this episode. There are quite a few frames with the flagman which were framed extremely well, striking a wonderful color balance, but other than that, episode 9 is visually bankrupt. I found this episode difficult to watch, boring me to the point that my mind began to wonder over the list of things I had to do that day – I was literally thinking of chores to do for mental stimulation instead of being actively engaged by my media. And that’s a damn shame.

“This is the first episode I’ve enjoyed in a very long time.”

As stated previously, I’m pretty much only watching this show now for Kanna, and as a fanboy of this adorable little blue-eyed white dragon, the episode delivered in spades. Admittedly, this is your run of the mill sports festival outing. Kanna gets excited for their school’s field day, Kobayashi isn’t sure if she’ll make it or not which causes drama, track and field gags follow. If you are looking for an original take on this troupe you will be disappointed, although that seems to be the formula that Dragon Maid is sticking to at this point. It takes just about every single anime cliche that’s been popular since the days of old and hopes that this time the characters are likable enough to make that segment’s storyline watchable.

With that being said, I do this this one was done incredibly well. What stood out to me the most here was how Kanna showed some real character growth. She’s a shy kindergartner who feels alienated given her background and the sports festival is a perfect opportunity for her to feel included. She’s not looking to be the star player or to win the approval of her parents. Kanna wants to be a part of something larger than herself. Through this small sports outing she’s able to get out of her shell. She becomes part of the community, which is what she’s always wanted. To see her achieve that is extremely heartwarming.

Kobayashi also has an interesting bit of reflection in the episode. Last time, she was confronted by Tohru, who wanted to Kobayashi to be her one and only. This time she’s being confronted by Kanna, who’s openly stating she wants Kobayashi to be her surrogate mother. It’s dawning on Kobayashi that her life has grown past only looking out for herself. She has two new people in her life who are expecting things from her. Things like time, attention and affection. Instead of fighting it, Kobayashi decides to buckle down and work towards satisfying those things to make the important people in her life happy. I really appreciate how there isn’t a selfish thought in Kobayashi’s reasoning to work harder to make Kanna happy.

This is the first episode I’ve enjoyed in a very long time. I really like Kobayashi, Tohru and Kanna working together as a family. That for me is where this series shines the brightest. These three goofballs experiencing the small beauties in life is charming and incredibly heartfelt. Anything that diverts attention away from that is an absolute waste of time in my opinion. There’s nothing to be gained from watching Elma or any of the other dragons. I watch this show for the family, not the friends of the family.

“…something tells me this episode will be a low ebb for many viewers.”

Miss Kobayashi’s Dragon Maid episode 9 barely moves the needle for me this week. It felt like it ran for twice as long as a normal episode. While I certainly would not ascribe the term “action packed” to prior entries in the show, this week in particular felt like a drag. There is a chance for some tension regarding Kobayashi’s attendance but she changes tack so quickly there is no opportunity for it to build. There are no standout set-pieces of animation, nor is there any doubt of Kanna’s victory in the sports festival. Further underscoring all this is just how… rote it all feels. We find out this episode that Elma is indecisive in three separate vignettes that all look and feel identical, while also not being all that funny to me the first time. 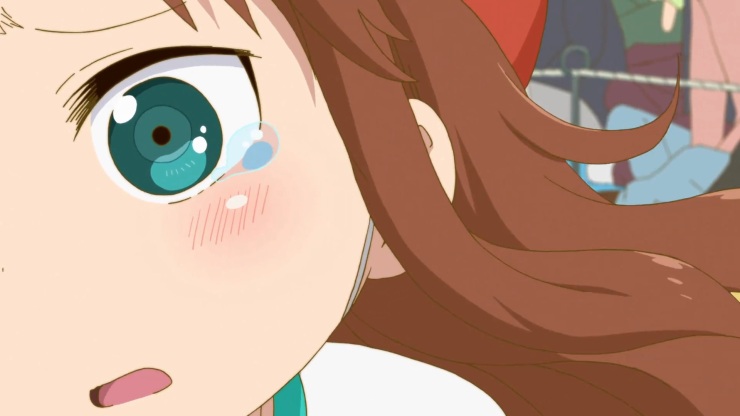 In fact, there was a lot of repetition this episode. The nearly still shot of Kobayashi and Tohru cheering was used multiple times, followed by identical shots of Saikawa’s parents each time with dialogue so similar I thought I had accidentally moved the slider back on the video. The “joke” about Lucoa pops up multiple times this episode as well, and the reactions of Shota and his classmates is copy-pasted for every instance. These sorts of tactics are not unknown in animation, but for a show that has gone to such great lengths to diversify its visual story-telling this feels like a fall from grace.

I understand that in the past my contentions with the show have been precisely the qualities that others have found so endearing, and I acknowledge that tastes will vary. But something tells me this episode will be a low ebb for many viewers.

“…though it was in some ways less impressive than the average episode it made up for it with heart.”

I wasn’t expecting much from this one, honestly. When coming off of the best episode in a series there’s no doubt that whatever follows will be at least somewhat disappointing, and indeed this is true of Miss Kobayashi’s Dragon Maid 9. Animation wise, this is the most static the series has ever been. But while it certainly is a more reserved production than what we are used to from this series, it still manages to be sugary-sweet delight. 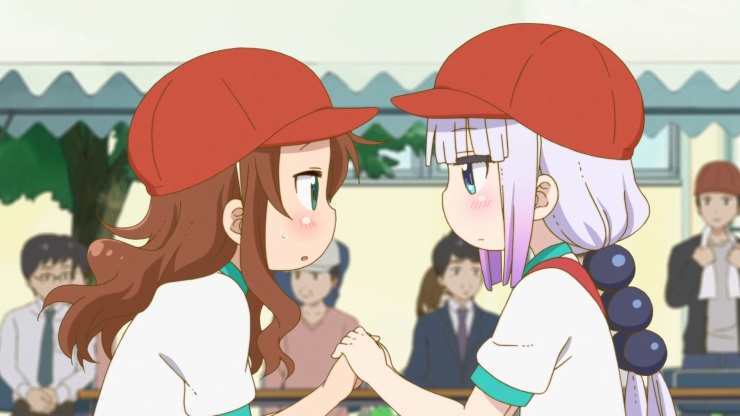 Perhaps the most notable aspect is that the episode is single segment, focused entirely on telling a humble, familiar story of a parent going to see her kid participate in the school sports festival. Having an entire twenty-odd minutes to convey the narrative helps differentiate it from other anime sports fest episodes (slightly less cliché than beach episodes, but usually pretty solid) in a very Dragon Maid way.

Kanna is the star this time, and it seems like she expresses a greater range of emotions here than the sum of all of her scenes prior. Jealousy, determination, sympathy, and frustration are only a handful of facets that are explored; if only the characters in this show could be consistently complex like this. Furthermore, her relationship to Kobayashi is expanded upon greatly. While the parent-child dynamic was loosely established by the roles they each play, it has never been made entirely explicit until now. This lends more development to Kobayashi, who already received a nice boost last episode, and now feels suitably fleshed out for her prevalence in the story. Kanna’s relationship with Saikawa isn’t quite as developed, but it is especially adorable this week due to the circumstances. 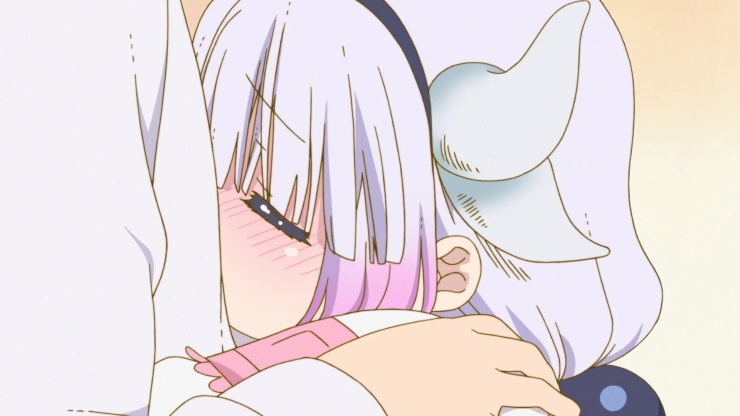 One thing that I’d like to touch on that I probably should have already is the music. The soundtrack for Miss Kobayashi’s Dragon Maid is composed by Masumi Itou, an accomplished artist who has contributed to several anime over the years, including Galaxy Angel, Infinite Stratos, Beyond the Boundary, and even the recent Flip Flappers. Her work in Dragon Maid is especially impressive, though, and is essential to crafting the unique homely atmosphere of the series. The relay race this episode had a track that stood out to me: an exciting, high tempo symphony orchestra piece that seems to have been composed specifically for this scene in particular based on how it reacts to the on-screen events. When Saikawa drop the baton, for example, the music immediately shifts to a minor key that ramps up the tension, and as Kanna takes back the lead she’s accompanied by a triumphant crescendo. After the sports fest there’s another incredible composition, beginning with light acapella that is gradually built upon with a variety of emotional string harmonies. The piece finds itself in almost every episode, likely because it resonates deeply with the tone of the series.

I was prepared for an entirely unremarkable Dragon Maid this week, and though it was in some ways less impressive than the average episode it made up for it with heart. It seems to be a common theme in this series that even the relative low-points are still valuable and worth attention. Perhaps this is the best evidence of all for its mastery of the genre.