Mamoru Hosoda rapidly rose to prominence during the first decade of the 2000’s, directing notable entries in the Digimon and One Piece franchise at Toei and later leaving to produce a series of internationally acclaimed films of his own. Today Hosoda stands as one of the most successful anime directors of all time, even creating his own Ghibli-analogous animation studio to produce his future films. While his works are celebrated by fans worldwide, few acknowledge what is perhaps his most effective piece to date, hidden at the tail end of a 200-odd episode magical girl series. A distillation of Hosoda’s filmmaking style, Ojamajo Doremi Dokkan! 40 is not only a hidden gem, but one of the greatest episodes of anime ever aired.

Among those who have seen Dokkan! 40, it is often viewed as a prototype for Hosoda’s breakout film The Girl Who Leapt Through Time. In a way this is true, each sharing a common inspiration in the original novel Toki wo Kakeru Shoujo, or more specifically Nobuhiko Obayashi’s 1983 adaptation of that novel. All of these are primarily concerned with the concept of time and the interaction between characters who perceive time differently, and while Hosoda may have wished to adapt Toki wo Kakeru Shoujo from the very beginning, he stumbled upon something more genius while working the concept into Doremi.

Throughout its run, Ojamajo Doremi had already focused on the imbalanced interactions between humans and witches, the latter of which have far greater lifespans. Lovers cursed to be driven apart, mothers who outlive their own grandchildren, and the burden of living through countless wars and plagues have all been touched upon, though always in the past-tense. Hosoda, seeing how the more personal time-difference narrative of Toki wo Kakeru Shoujo could be applied, makes the conflict central to the main character. But there’s one catch: witches can only be women, and Doremi is a girl herself, so it would be difficult to recreate the forlorn love story present in the original. Thus the central theme is revised to accommodate Doremi’s coming-of-age and her feelings of inadequacy when compared to her talented friends. Furthermore, it finally brings attention to a question that concerns all of the ojamajo: Is becoming a witch really the right choice?

Ditching Toki wo Kakeru Shoujo’s exuberant melodrama for quiet introspection and personal conflict, Hosoda proves why he is the most achieved of the Ikuhara-school of visual directors. His authorial voice is more restrained and naturalist, giving intimate attention to smallest details of his characters and worlds to build relatability with the audience. This can be seen in The Girl Who Leapt Through Time as well, which foregoes Obayashi’s avant-gard effects and transitions to appear more grounded. Evidence of Dezaki-isms that are the root of Ikuhara-school still remain, but they tend to be more subtle and only flare out in particularly dramatic scenes. Dokkan! 40 essentially draws out all that is unique to Hosoda in a way that nothing else he’s directed has managed.

Moving on to the episode itself, Doremi finds herself at a crossroads. Left alone by her friends due to their prior obligations, she decides to take a detour from her usual route home. It’s a metaphor for the walk of life. We’re guided through a variety of detailed vistas as Doremi wanders an unfamiliar side of town, often being reflected through glass fixtures and doors, establishing visual symbolism early on. The stroll is suddenly interrupted by a startling crack, drawing Doremi’s attention to a nearby home. There she encounters a mysterious witch, Mirai, a glassblower who refuses to cast magic (she is actually voiced by the main actress of Toki wo Kakeru Shoujo on Hosoda’s request).

Handing Doremi a glass marble, Mirai imparting a valuable truth: glass is neither a solid nor a liquid, its atoms move ever so slowly over long periods of time. To a human who lives only for a short while the glass seems no never move, but witches thousands of years old can see the motion. This fundamental difference in perception is captured by the glass, imposed on the image of the town, as we’re left to wonder how quickly the world must change to these ancient witches.

Yet by heating glass to extreme temperatures even humans can make it move, and so glass working acts as an intermediary between Doremi and Mirai, who become student and mentor. We learn that the two of them are much alike in their open-hearted lifestyles when Doremi stumbles upon a vanity full of old pictures from around the world, full of faces of friends both old and young. With a soft voice tinged with longing, Mirai speaks of her own mentors and of past partners that she has had to abandon because of her unnatural aging. We begin to understand why she clings to old scraps of memories as she moves from place to place; as a witch she cannot hold on to anything. Mono no aware characterizes her entire life in the human world, watching all that she loves change and fade away.

Doremi is troubled herself, as she confesses on an autumn afternoon after failing to mold a glass properly. Her pain comes from feeling inadequate and unsure what to do in life. She has no passion or talents besides eating steak, and compared to all of her friends she feels like a failure. Mirai offers no direct advice to her and simply dips her finger in water and runs it around the rim of her glass, creating an absorbing resonance, as if to say ‘appreciate the present moment’.

As Doremi continues to hone her skills at glass making Hosoda’s direction and the above-average character animation really shine through. What were at first rough and clumsy movements are clearly improved over the course of the episode until she has gained the technique necessary to feel satisfied with her art. Perhaps she has finally discovered her calling, but as she celebrates Mirai offers an ultimatum: she is leaving the following day to Venice, and she’d like Doremi to join her. 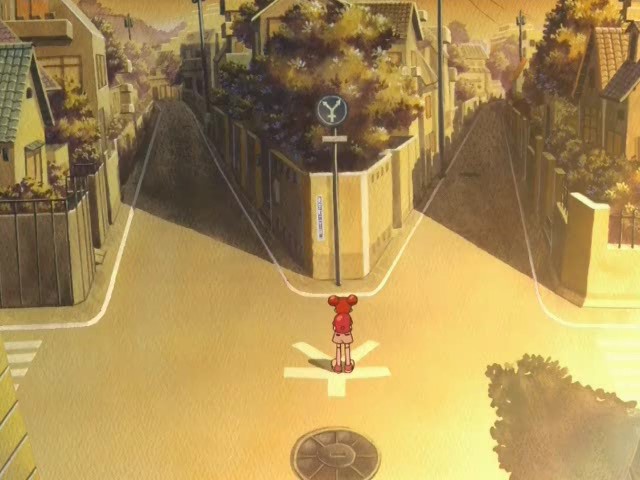 At sunset, the sky a dark orange hue, Doremi returns to the crossroads. Does she resolve to pursue her newfound talent, to become Mirai’s successor? Does she become a witch? Or does she return to her normal life? At the last moment she runs to Mirai’s home once more, the site of their friendship. All that awaits her is a photo they took together, weighed down by her finished glass. Walking away from the experience Doremi has gained her own sense of longing, much like Mirai herself.

As much as I appreciate Hosoda’s other films and episodes on their own merits, there is something distinct about Dokkan! 40 that you cannot find anywhere else. Divorced from the context of the series it still stands as an appreciable work of art, although it is an integral episode for Doremi’s development. As visually memorable as it is, it maintains relatability throughout and never alienates the viewer. It’s not bogged down by unnecessary romance elements or action scenes, and every frame works to conveying a singular feeling. Perhaps the episode direction format is the only way something so pure could have been produced, something I doubt Hosoda will ever return to replicate. At least we’ll always be able to keep Dokkan! 40 as a reminder of his unmatched talents as a director.