Hey gang.  So, what you’re about to read isn’t an original piece for WMC but something I wrote late last year just after I finished Euphonium.  I published it on my personal blog, but most of you probably didn’t see it then, and with the new season of Eupho right around the corner, it seems like the right time to put this out there once again.  Without further adieu, here’s my late 2015 defense of Asuka Tanaka.

I recently marathoned through KyoAni’s outstanding high school drama, Hibike! Euphonium.  One of my favorite reasons to watch was the character Asuka Tanaka.  When I took to Twitter to talk about my experiences with the series, I discovered, to my great surprise, that she is far from universally beloved among the fans.  Some even refer to her as an out-and-out bad person.  This is a claim that I simply can’t get on board with.  However, at the same time, Asuka’s behavior is so inconsistent that it’s difficult for me to put forth a competing characterization.  Though I feel we won’t truly grasp what makes her tick until season two airs in 2016, I believe that the thing that makes Asuka so fascinating is, in fact, this very inconsistency. 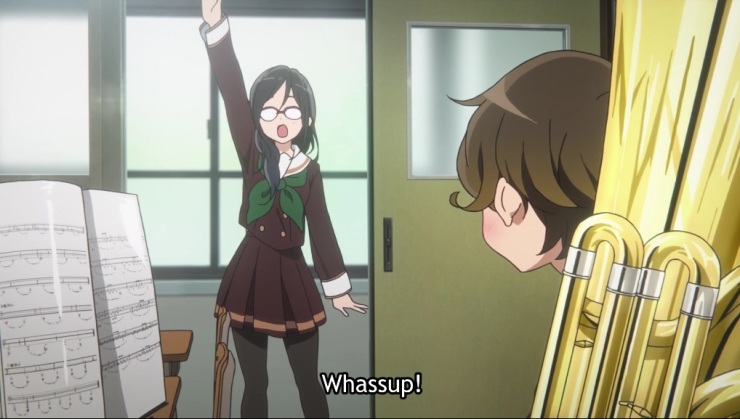 On reflection, I can see how some might find Asuka a bit maddening.  Her unpredictability repels hasty and/or superficial character labels, and this certainly seems to run counter to the desires of “database animals.”  But, that’s probably unfair on some of the criticism.  The claim that Asuka is a bad person is one which needs to be given a thorough examination  in a piece like this.  One could certainly point to some of her actions and claim that those actions indicate that she is a certain sort of person, a person we would consider bad.  Once again, however, her inconsistency saves her from such charges.  If we “zoom out” and examine the totality of her behavior, we will find it difficult to sort Asuka into the “bad person group.”

The following might be a useful exercise to illustrate my point.  I will construct an argument that Asuka is X sort of person (a leader, a competitor, etc.), using examples of her behavior as my premises.  Then I will provide a counter-example (a pin to pop the balloon) for each argument in the form of an action Asuka performs which X sort of person would not.  This should effectively demonstrate the difficulty to put her in a box while simultaneously exonerating her from bad-personhood.  Let’s begin: 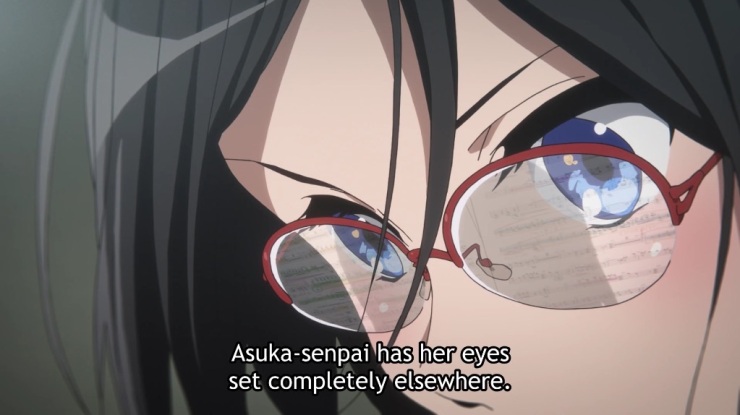 (L1) Asuka is vice-president of the concert band

(L2) Asuka is the best player in her section

(L4) Asuka is a natural leader

She has taken a leadership position, leads by example and also coaches the other bass players.  Asuka seems like the embodiment of leadership.  However,

(L5) directly contradicts (L3), which seems integral to (L4).  For reasons unknown to the audience, Asuka allows second year euphonium player Natsuki to sleepily lounge by an open window during practice, rather than sharpen her skills and improve the quality of the band as a whole.  We can speculate on the reasons for this behavior: she may be trying to maintain (L2) and feel threatened; she may have had some kind of confrontation with Natsuki during the turbulent previous year of band, causing some kind of rift between the two; or she may even be exercising some unusual sort of leadership tactic with only Natsuki.  We simply don’t know why she leaves Natsuki to her own devices, but I think we can agree that this action calls into question the truth of (L3) and (L4).

(H2) Asuka makes her section practice hard, even if other sections are taking it easy

(H4) Asuka is hyper competitive and wants the band to win

She has tunnel vision, this girl.  She pushes herself and pushes others because, more than anything else, she wants the band to do well.  But what about the aforementioned (L5) you might ask?  For me, (H4) holds up under scrutiny where (L4) does not.  It seems entirely reasonable that Asuka would observe Natsuki’s behavior and think, “She’s a lost cause.  There’s no reason to waste time and effort trying to get her up to speed.  It would be far more productive to focus on myself and others who want to be here.  That is the most efficient path to winning.”  Such thoughts are inconsistent with being a leader but not with being hyper competitive.  For the moment, we’re only concerned with maintaining that (H4) is true.

Someone else might object and claim that Kumiko brought Natsuki into the fold with very little effort, but Kumiko is an especially friendly, welcoming person.  Like many athletes famous for being extremely competitive, Asuka does not excel in social graces.  The difficulty of politely asking her junior to do her job and pull her weight is compounded by the fact that, if (H4) is true, Asuka probably holds a fair bit of contempt for a band member who isn’t even trying.

This characterization of Asuka as hyper competitive seems strong, yet

(H5) Asuka is disappointed that the band wins gold

There’s that scene in the last episode.  Remember?  If you’re not ready for it, it’s quite disarming.  The band is tense, its members on the edges of their seats.  They are waiting for their SunFes result, the thing they have been working towards slavishly for hours, days, weeks, months.  They’ve sweat for this; they’ve bled for this.  God knows, they’ve wept and prayed for this.  Asuka in particular has worked very hard.

The announcer calls out their name.  They won gold!  This formerly ragtag band has won gold.  People are crying, hugging each other, cheering loudly.  Then the camera cuts to Asuka, and she looks at the floor, her face full of…disappointment.  I have to admit, I am utterly baffled by this scene.  I’m sure next season will explain it.  At any rate, (H5) obliterates (H4). 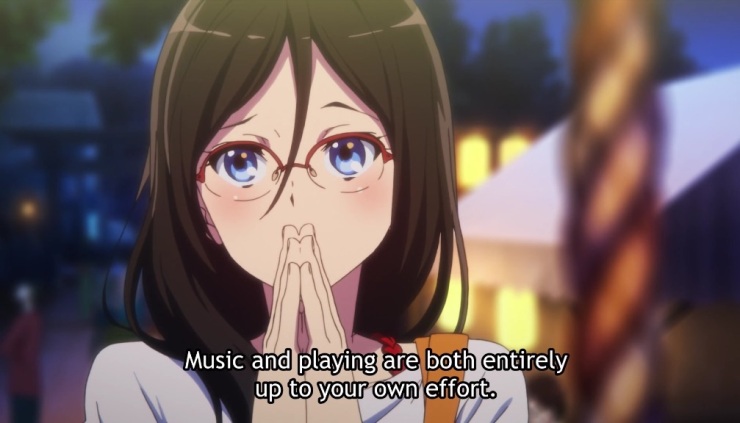 She seems to want to avoid any responsibility.  She turns down the role of president and has to be pushed into being vice president, despite her unifying presence.  She has absolutely no interest in band politics, and she won’t help Kumiko out with her difficult part for SunFes.  Asuka doesn’t seem to be interested in much if it’s not furthering her own goals.

However, upon closer examination, this argument, too, breaks down.

(S5) Asuka takes on the role of VP, despite not wanting to

For someone who avoids responsibility, Asuka has sure taken on her fair share.  Maybe more than any single member of the band, actually?  Natsuki herself says that often people don’t enjoy the things they’re good at.  It seems overly harsh to criticize Asuka for not taking maximal responsibility when she is, in fact, taking on a great deal of it (again, more than anyone else in band).

Regarding (S2), while it is true

is also true.  One could argue that this result is only a coincidence.  I’d be more inclined to believe that if (a) the “outburst” wasn’t so seemingly artificial and (b) Asuka wasn’t the consummate cool customer.  She may be mysterious, but, if you can make any positive claim (as in not negative, rather than “good”) about Asuka whatsoever, it’s that she is not prone to overreact emotionally to anything.  Rewatching the scene in question, her movements seem stilted, her dialogue very intentional.

For my money, she sees this faux-outburst as the best way for the band members to settle the issue among themselves and get back to what’s important: band practice.  I know Asuka begins her (fake) tantrum by repeating “I don’t care” several times, but, if she didn’t care about what happened to Midori, she wouldn’t have asked because, as we’ve established, Asuka isn’t prone to doing things purely for the sake of politeness.  It’s only once she’s heard what the issue actually is that she “goes off.”  She makes sure that the issue comes into direct conflict with the band so that Hazuki and Midori will feel pressure to squash it quickly.

Finally, while (S3) may be true, it’s also the case that

(S8) No character teaches any non-beginner character in the show

I may be forgetting something, but I don’t recall a single scene involving one character teaching another character who wasn’t a beginner.  Sure, people have to instruct Hazuki because she hasn’t ever played a musical instrument before, but the instruction she receives is very rudimentary.  None of it is involved or takes much time away from practice.  It’s all about preparing her to play, rather than technical assistance with difficult parts.

Despite many characters struggling at one time or another with their parts, we don’t see any of their friends and/or senpai teaching them.  Nor, just as importantly, do we see any of the strugglers asking for help.  It’s important to Kumiko to improve on her own, and, as long as Asuka sees her striving to be better, she has no reason to disrupt that or disrespect Kumiko by stepping in.  Also, Kumiko has been playing the euphonium for years and years.  She likely knows all the shortcuts.  Given all of this, (S4) seems entirely false and an intentionally selective reading of Asuka’s character.

OK.  I feel continuing with the exercise will belabor the point.  It’s clear that fitting Asuka into the mold of an established character type is difficult.  She certainly seems to adhere to the above descriptions, but then she will do something entirely contrary to each one, effectively eschewing any labels.  It is this inconsistency, I feel, which makes her a truly three dimensional character.  It makes her feel more real.  When you examine a person’s life, the farther you expand the scope of your lens, the greater the chance that contradictions will appear.  Maybe next season we will get some answers that make sense of some of Asuka’s actions, but, perhaps it’s just as likely that we won’t ever completely see through her mask.