Be sure to check out the write-ups for prior episodes!
Episode 1 | Episode 2 | Episode 3 | Episode 4

There was a moment while watching this episode where I was generally thinking of writing a positive reaction, but then the episode shot itself in the foot. Let me back up.

This episode picks up directly after the last with Teruki challenging Mob to a psychic showdown. Mob refuses saying he doesn’t want his psychic power to define him and how he lives his life. Teruki continues to provoke Mob, beating him senseless. Mob is stead fast in not wanting to use his powers. Teruki pushes further and further, killing Dimple (We’ll get back to this) and even nearly choking Mob to death. With Teruki screaming at Mob to use his abilities, his ghost buddy killed, his own body begging for him to fight back, even knowing that not fighting back means instant death, Mob refuses to give into the temptation, because he knows the moment he does, there’s no hope of him being able to redeem himself. With Mob lying on the floor unconscious, Teruki walks away unsatisfied knowing that he was denied the possibility of testing his abilities against another psychic. Both young men have lost this fight. There were no victories to be found in this battle, it was meaningless. 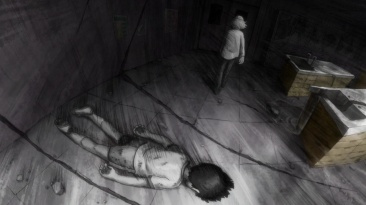 That’s good storytelling right there. While the battle was a test of skill for Teruki, it was a test of morality and restraint for Mob. Both wanted to prove something to themselves, Teruki wanted to be the best and Mob wanted to prove he could change. There’s usually not that much thought put into a fight scene these days and I found that to be generally impressive and entertaining to watch.

BUT THEN THE SHOW HAD TO REMIND US THAT ITS SHONEN!

Yes, after all that, when Teruki is walking away, Mob goes into his berserk form and wipes the floor with Teruki, completely negating the impact of the entire fight scene. The point of doing this was to establish Mob as a tragic hero, who wants to change but can’t because his powers are too strong and sought after by many. Basically, he’s the Hulk. You can replace the music during the end scene where Mob is repairing the school with The Lonely Man Theme from the tv series. That whole bit I mentioned about Teruki feeling empty after the battle, throw it out the window, because now he knows he can’t match Mob’s levels of awesome. Mob’s morality victory over Teruki, pointless, he’s the monster who can’t control his powers and threatens the well being of those around him. Let the flood of Mob Pyscho 100 / My Chemical Romance AMVs come forth and drown YouTube in a terrifying sea of Emo garbage that we haven’t seen since Naruto’s Sasuke.

The episode shot itself in the foot by giving into the tropes of its genre. It could have been better, but no, we are stratified with the status quo as long as it looks pretty. Instead of creating interesting drama, it settled for Melodrama. That’s been my issue lately with a lot of modern day anime titles. They all have the potential of being something unique and exploring interesting character development, but it settles for gimmicks that have been proven to work before. Instead of taking risk, they play it safe. They want want the same hit they had ten years ago and they just keep chasing that dragon while the quality of their product just becomes this hallow shell of itself.

The last thing, I’ll talk about is Dimple’s death. In short, I would be impressed if he stays dead, but his face is too marketable to only last three episodes. Every piece of marketing I’ve seen for this series has Dimple’s stupid ghost face plastered all over it. I doubt the series can pull off a bait and switch like Mami from Madoka. Again, time will tell if he stays dead, but I doubt it very highly.

“Every part of its production weaves together to create a tremendously effective experience.”

Two weeks ago I complained that episode 3 of Mob Psycho didn’t feature enough buildup to make its payoff worthwhile, that its most impressive cuts had little purpose outside of self-serving spectacle. Reading impressions from other members of the anime community, I believe most are content with that approach as long as the animation is good enough. I must be the black sheep, then, since I find it difficult to invest myself in a scene based purely on its quality of production, and while I enjoy looking at individual cuts on sakugabooru from time to time it’s really the context that draws me to them.

This week Mob Psycho gave me the context I needed.

With the setting of an ideological conflict that’s well based in the themes of the series thus far, Mob and Teruki’s conflict is a drama more than a battle. “Will Mob cave in to pressure?” is the question on everyone’s mind as Teruki relentlessly tortures him, but Teruki’s own moral dilemma is just as compelling, if not more so. His frustration and steady breakdown as he attempts to force his worldview onto Mob to prove his self-worth colors him far more empathetically than I had expected and gives reason to his narcissistic characterization beyond mirroring Mob’s naïve modesty. Mob even directly mentions the similarity between the two of them, segwaying into an imaginative representation of loneliness conveyed by a solidary hair on Teruki’s head, shaved by his own over-aggressiveness.

While the plot and themes give meaning to the action, the animation goes further to complement and embed further meaning into each cut. Teruki’s mounting ire can be both on his distorted face and desperate movements while the maniacal nature of his self-worship is emphasized by vulgar grin, drawn wider as he leans his head back in delusion. The streaks of seat and snot flowing down Mob’s face as he’s strangled make his transformation into the fire-like ink strokes of his unleashed form feel deserved this time around, and Miyo Sato’s ghastly cut is harrowing in a way unique to her style. The animation balances and supports the narrative in a way that just feels right this time, and my complaints have all but evaporated. 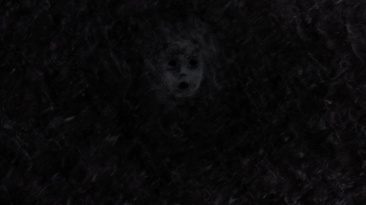 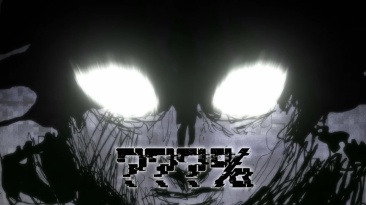 There’s one other aspect that coheres the pieces of this episode into a single experience, and it’s something that I don’t usually see spoken of in the communal niche I’m a part of: the voice acting work. I keep coming back to Teruki, I know, but he really stole the show this time and it wouldn’t have been possible without Yoshitsugu Matsuoka’s fantastic performance. In the same way that the animation reflects his degrading mental state, the voice acting descent into madness pushes the concept further than anything else this show has done so far. Just listen to how off-the-hinge he sounds arguing that he and Mob are nothing alike, look at how well it blends with the respective character acting, it’s absolutely fantastic and my favorite part of the episode by far. Unfortunately nobody else on the voice cast has sounded nearly as authentic as Matsuoka, but perhaps that will change in the future.

Overall, this was easily the best episode of Mob Psycho so far. Every part of its production weaves together to create a tremendously effective experience. If there’s one complaint I might have about it it’s how thoughtlessly they killed off Dimple, but hopefully he somehow finds a way to come back since his quips had quickly become one of my favorite parts of the show. I’m not sure what direction Mob Psycho is going in next, but it has already cemented itself as a worthwhile anime in my mind, and if it pulls any more episodes as great as this out of its hat it could be one of the best of the year.

Mob Psycho truly revels in duality. Perhaps the smartest part of Mob‘s storytelling is this narrative juxtaposition, between comedy and sincerity. It is out of contradiction and paradox that the tone is chiseled; the characters and story defined. This theme of dialetheistic duality is personified this episode in the battle between Mob and Teruki. Pacifism in society vs an aggressive pursuit of hierarchical authority.

The animation this episode did well to serve this idea; instead of such a heavy focus on stylization (though it was not absent, don’t get me wrong) perspective and camera angle took priority. Visuals portrayed the clashing views of Teruki and Mob from all viewpoints, literally moving the camera in all sorts of contorted angles to follow the fight. In particular this episode stands a paragon of storytelling though action, the details of the story defined by the details of the physical conflict. Mob’s refusal to fight back is punctuated by brilliant rag-doll like movements as he is telekinetically tossed too and fro for 15 minutes. Teruki’s attempts to brutality thrash young Mob lend visual to his superiority complex. In this regard the animation felt more natural, existing as a natural extension of the character versus defining the character a la One Punch Man (does Saitama define the punch or does the punch define Saitama?).

Due to the way this episode ends some have labeled Mob as a tragic hero (looking at you CJ), others have gone as far to assert Teruki was right, but I feel like that thought isn’t being fully thought out. While true Mob was unable to change, did people not see the end of the episode? Teruki acquiesces Mob’s entire philosophy that espers are no one important without their powers, in other words, he changes. Not only this, but Mob actually changes as well, coming to terms with the feeling of sorrow, going as far as looking for Dimple and taking action for his unconscious actions by apologizing to his brother. There’s no way you can say Mob hasn’t changed, and even in his failure to not use his powers he is successful in changing Teruki. If Mob is a tragic hero is it because he (and the viewers for that matter) are unable to see his successes, and that’s how it is in life.

It’s almost funny when you think that Mob lives his life in such a noble paradigm based off something Reigen said. In fact, the show even makes that a joke. That’s the dialetheism I was talking about. Just because a character as dishonest and insincere as Reigen serves as the vessel for the message that doesn’t make the message any less true. Mob is a young boy who strugles with simple tasks like math tests, lifting weights, and running, yet Dimples compares him with God. Dimples too has gone from a power-monger to playing Jiminy Cricket. Both extremes are real in each case, but the truth of these characters lies somewhere in between.

The scene best showcasing all these elements was the strangulation scene. Mob’s percentage is rising, yet he still holds out, saliva and mucus escaping him as Teruki tightens his grip. It’s a pitiful display, but the sense of desperation is real. Mob is willing to face death in order to be the person he wants to become.  A bald Teruki is willing to kill for the sake of his pride as top dog. No psychic powers, no flashy pieces of animation, just a pathetic punch – and the emotion pours out of the drawings. We’ve stepped outside cartoony antics but not outside the cartoon, and that’s what sakuga is.