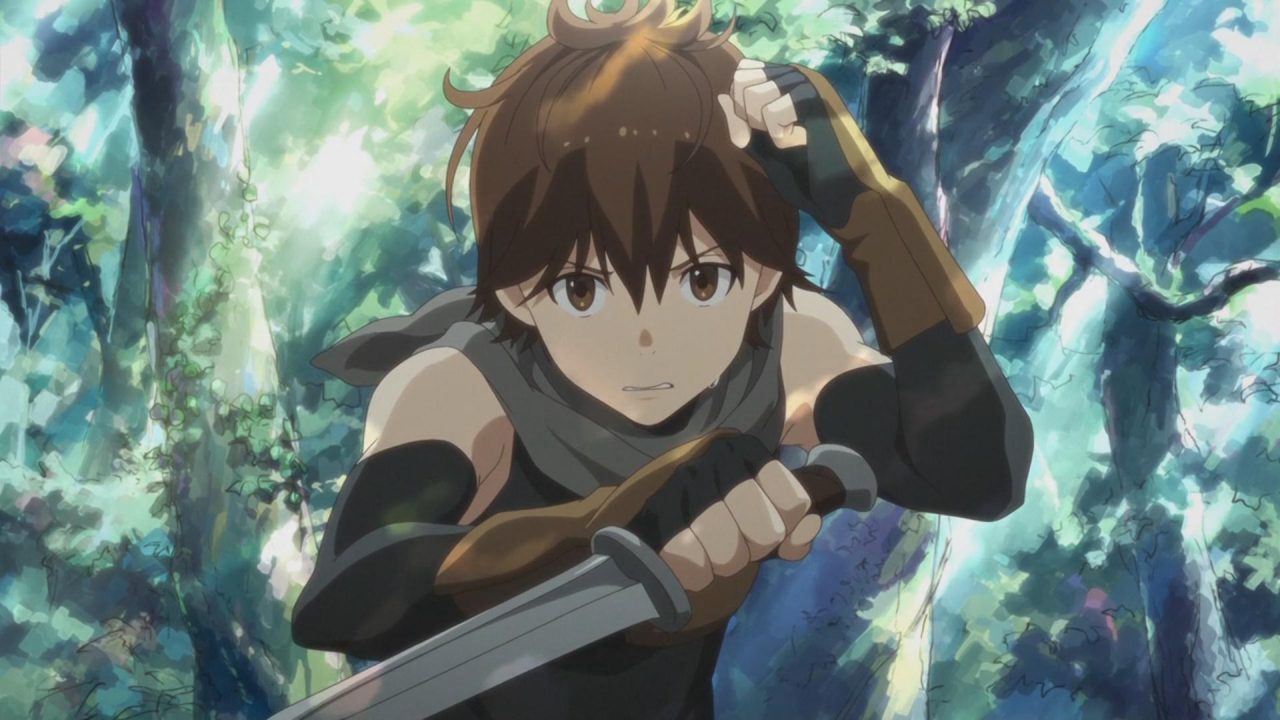 Deep in the heart of Weeb Mountain, while meditating under a waterfall of molten nendoroids, my inner chuunibyo stepped out of the shadows to challenge me for my soul. From that titanic conflict, an Anime of the Year List arose. A relic of the Dark Historica, this list roams the void and consumes all who encounter its black flames. Due to various circumstances, I have decided to share it with you. Prepare yourself*!

*If your favorite anime didn’t make it on this list…go make your own list.

This list is in no particular order because I fucking hate ranked order lists. Each of these are a number 1 in some kind of way in my book. Every one of them didn’t get, in my entirely correct opinion, the props they deserved. That’s why you don’t see Erased, Mob Psycho 100, or Yuri!!! On Ice. Love em or hate em, those shows got plenty of press. 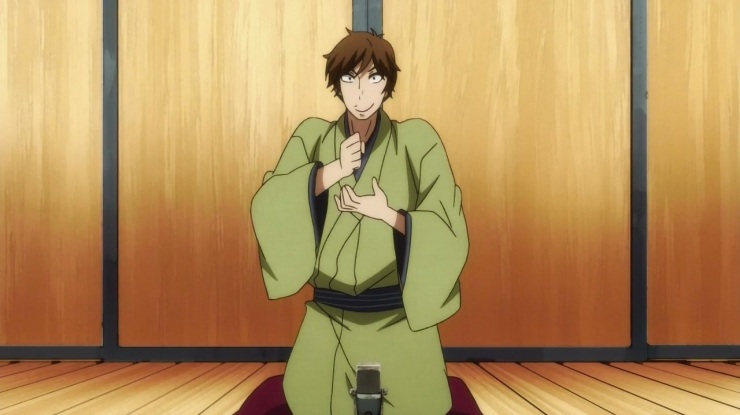 I love this show. It’s good!

I’ve also talked about this show on @OldtakuNoRadio  and I talked about it for an upcoming Taiiku Podcast AND I’m going to be talking about it for our upcoming Wave Motion Cast so just listen to those and you’ll hear all my reasons why. Like, three times. 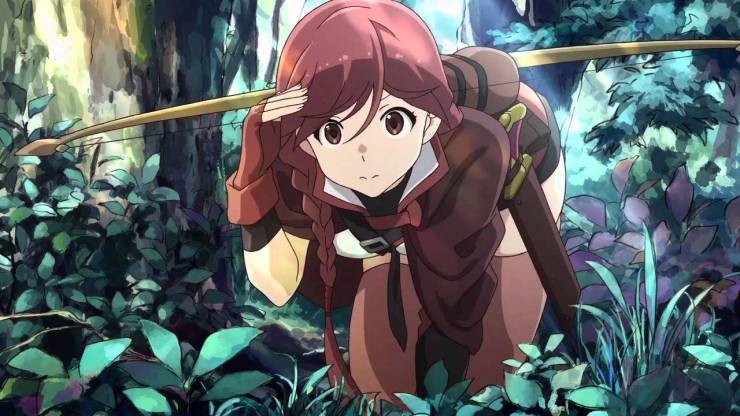 This little show went largely unnoticed during Winter 2016, but this is my favorite sword and sorcery fantasy show since Record of the Lodoss War. Grimgar starts with a group of teenagers trapped in the most overused premise in all of fiction. While it begins from that ol’ crossing-over-into-a-fantasy-world chestnut, it quickly finds distinction by rendering an realistic picture of what would happen to a band of modern kids in that situation. They shake with fear and adrenaline at the prospect of having to kill a single goblin, a peon by the usual fantasy standard, but a real threat to their party. More that that, they recognize the goblin as a living creature, and that their survival will have to come at his expense. That was refreshing, arguably groundbreaking, for a fantasy anime. Grimgar portrays party downtime as slice of life, and “adventuring” with a grittiness that few modern fantasies are brave enough to take on. It also features some pretty great animation and backgrounds…and some needless fanservice. All in all, its definitely an unsung, quality fantasy anime and worth remembering. 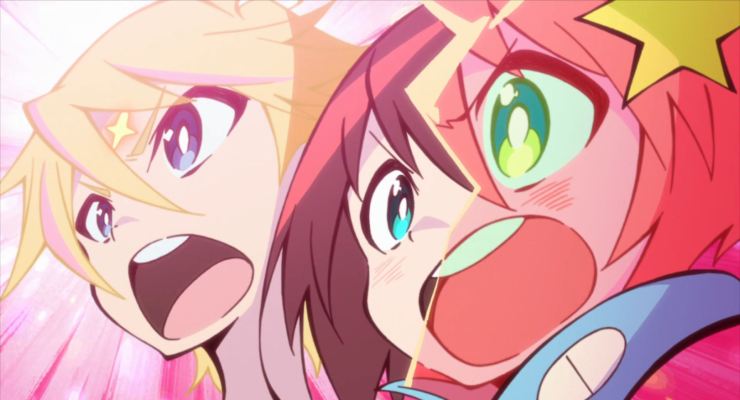 If you’ve ever wondered what Stephen King’s The Dark Tower series would be if it were a Trigger anime, look no farther that Space Patrol Luluco. Luluco has all the zany, frenetic animation you’ve come to know and love from directors Imaishi and Amemiya, who seem uniquely capable of cramming epic action and surprisingly expansive plot into an eight minute package. Also like The Dark Tower, Luluco will have a bigger impact the more of Trigger’s other projects you’ve seen. Consume all of those and then come back and treat yourself to the saccharine desert of a show. 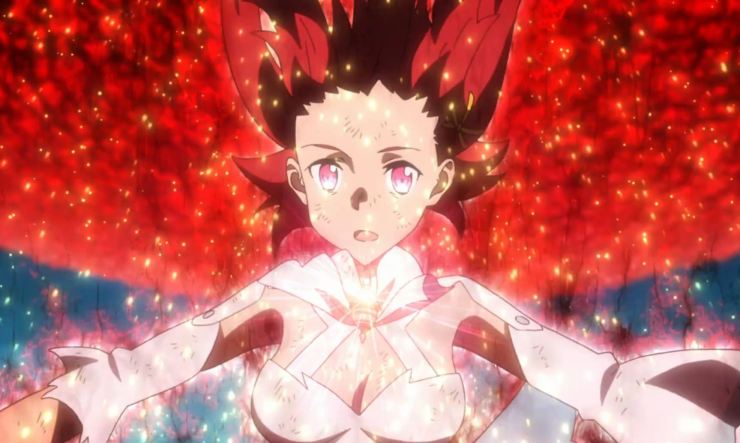 Alternate history war anime are nothing new, but I found Izetta the Last Witch to be not terrible, which is more than I can say for any of the others. It had kind of a Valkyria Chronicles vibe, if you remember that game or its anime adaptation that I’m SURE you’ve seen on Crackle. Unfortunately, Izetta falls victim to some oblique (some less so) needless fanservice. Apparently because shows like this don’t work unless cram in skimpy outfits and bath scenes into a show about the tragedies of war and grasping hope when all else is lost. On balance its a good show with VERY good mechanical designs for its war machines, even if witches flying around on anti-tank rifles seems a bit impractical. And phallic. 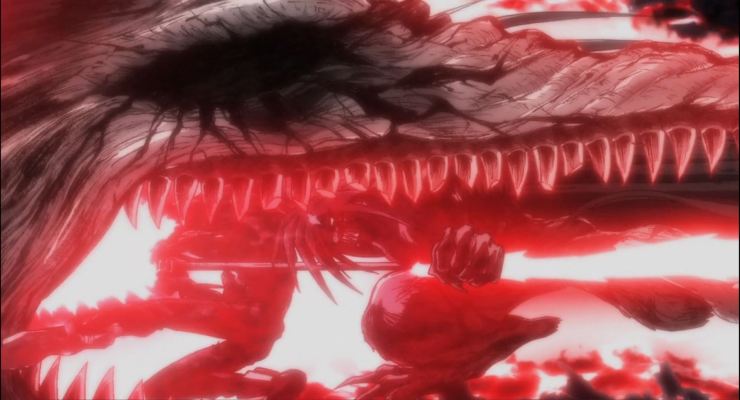 I had seen the 90s Ushio and Tora OVAs at some point, probably in a video room at AWA just before the end of the Ice Age. I didn’t come away from it with any sort of appreciation beyond “Hey this is anime! It’s so good!”. With the rebooted adaptation of this classic, MAPPA and Voln revitalized the source material and gave us the most manly, shonen, action filled anime of this year. 2015’s first season also ranked among my favorite anime of that year, but this year’s second season epitomizes old 90s anime action with ferocity and intensity that makes other contemporary shows seem mundane by comparison. 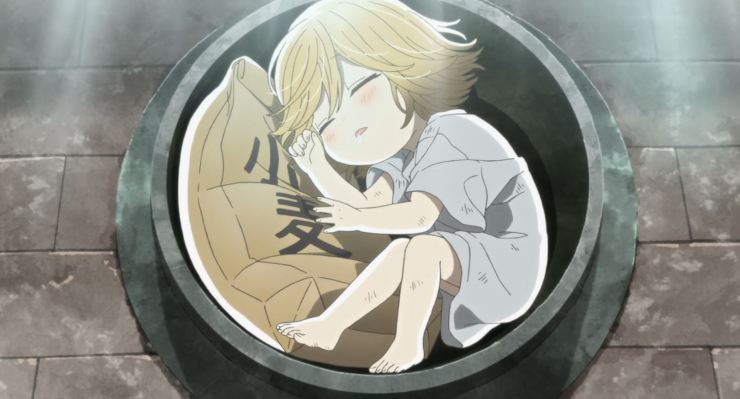 These are quite good slice of life shows. They both have adorable kids, food, and caring dads. Watch either one. Have feels, get hungry, and cry manly tears. For me, Poco’s Udon World has a little bit more of an emotional punch while Sweetness and Lightning has a constant bitter-sweetness present throughout its run. 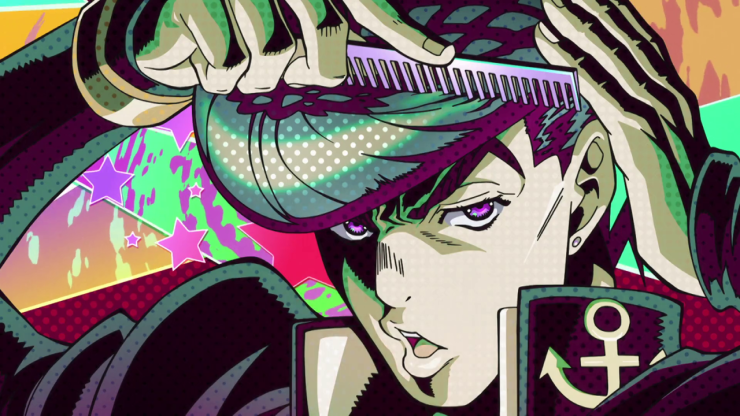 At the risk of repeating myself…IT IS CRIMINAL how little recognition David Production has gotten for the amazing job they did on Jojo’s Part 4. Streamlining Araki’s massive Diamond is Unbreakable arc would be a monumental task, but doing it and making it a tighter story while animating it beautifully?!? AND HOW MANY TOP 10 ANIMU OF 2016 LISTS IS IT ON? Pitifully few. Do better, America.

AND! Jojo’s Part 4 has the best opening song and animation combo of 2016! The best, I tell you! 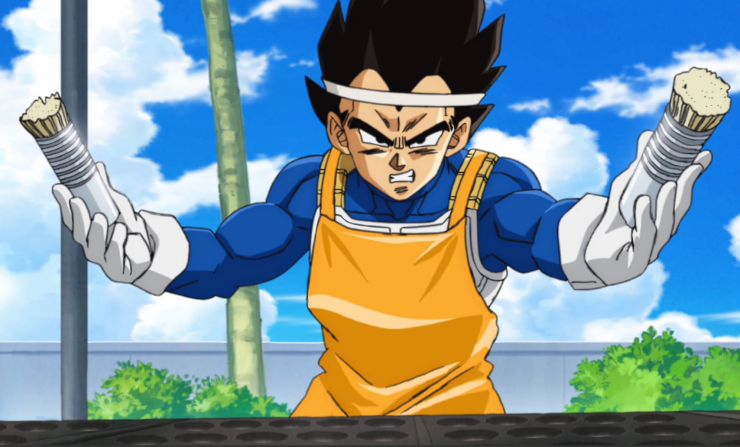 Dragonball Super tells the story of a man with a checkered past desperately trying to save the multiverse from its most powerful idiot. Our hero, an outwardly dour man with a deep love of his family, trains constantly in the hope of being able to prevent his idiot friend from challenging anymore people to galaxy crushing brawls but always seems to fall short. The sacrifices he makes to save his family from cosmic forces of destruction stand as a testament to his heroism.

OK, OK, I kid. But look, Dragonball Super does in fact conclusively prove that Goku is a GIANT asshole, alright? Vegeta, of all people, turns out to be the most sensible person in the entire cast.

Dragonball Super avoids the season spanning battles of Dragonball Z in favor of a tighter formula that relies strong slice of life, family comedy goofiness. This keeps the show remarkably fresh and much closer to the spirit of the original Dragonball anime and manga. Also, babysitting Piccolo is the greatest thing to grace the screen in many years. Even Yamcha gets screen time. I’m sure you’ll all go break Crunchyroll trying to watch THAT episode.

The Haruhiko Mikimoto Award for Most Mikimoto: Kabaneri of the Iron Fortress When Haruhiko Mikimoto designs an anime’s characters, that anime automatically gets on my list. Mikimoto-sama, the greatest character designer in anime history, gets an award just for blessing us with a return to animation for the first time since the early 2000s. As for Kabaneri itself, its almost like the anime version of a rock supergroup making a show. Attack on Titan comparisons are inevitable, sure, but Kabaneri has more than enough merit to stand on its own. It’s a very pretty show. The shading and lush, carefully balanced use of color in the show offers a look that you won’t find anywhere else. It also has a fairly neat alt-history steam/diesel punk Japan setting and, for my money, a much greater sense of danger and vulnerability for its cast compared to Titan. And again, and most importantly: Mikimoto.

#1 Show Withheld By A Corporation: The Great Passage Fuck you, Amazon. Fuck YOU. This show deserved better. It deserved to be celebrated by fans for the compelling drama it turned out to be, not held on to as part of your dubious ala carte cable model.

If you haven’t used your free trial for Anime Sutoraiku, then by all means go marathon this wonderful show about the varied meanings and communicative alchemy of words.
ALSO: I CANNOT GET OVER HOW POWERFUL THIS MAJESTIC CAT FACE IS!

And last, but most certainly greatest of all….

The Gen Urobuchi God Tier Award for No Sakuga:

Last on my list, but first in the hearts of the righteous comes this groundbreaking, amazing show from Urobuchi, Gen of Thunder. In my personal head canon, I envision some drunken fool challenging Urobuchi to make a puppet anime and have it be as epic as something conventionally animated. And then I imagine The Urobucher slamming back the rest of his goblet of unicorn blood before replying: “Yeah, okay. That sounds really swell. I’m gonna do that.”

Thunderbolt Fantasy proves once and for all Gen Urobuchi can do whatever the fuck he wants to.

Thunderbolt Fantasy, of all the shows that aired this year, challenged the anime fan community because many of us COULD NOT EVEN WITH THE PUPPETS. Please. Anime is something that you know when you see it, but only if you really looking. CG anime generally is referred to is anime, despite the fact that there is ONLY ONE good CG anime in existence. If CG anime with its wireframes that one might call…puppets…can be anime, why not an actual puppet show? If you can’t see the strings, then what’s the difference? A sword that has no edge, in the right hands, can still cut as surely as the brightest steel. But I digress.

Look at this man. 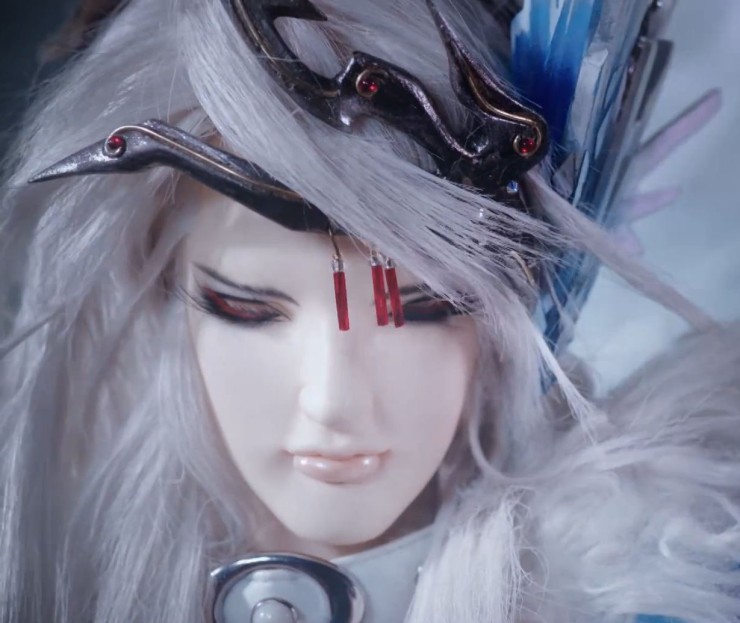 This is Lin Setsu A, the most beautiful man in all of anime.

Now, look at his eyelashes.

These are Lin Setsu A’s eyelashes, the most beautiful creatures in all of anime. They’re like twin phoenixes gently napping before being reborn to paint the world in flames.

The people on this show are too hot to be animated, none more so than Lin. He is too powerful for the 2D world.

Is anime an animation style? Or is it a style of visual expression? Be like Gen Urobuchi and define it your OWN terms.